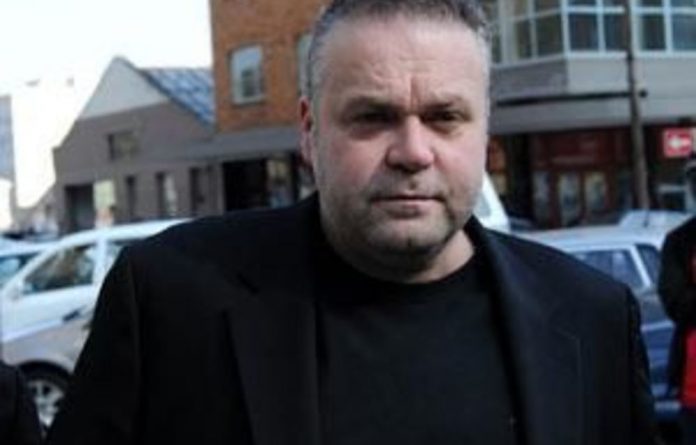 The bench in the Pretoria Magistrate’s Court broke under the weight of the three men before their matter was called, prompting Krejcir to mutter: “They will probably want to open a case against me for that now”.

The robbery case of Krejcir and his two co-accused was shortly thereafter postponed until May 11, to give the defence a chance to study the case docket.

Krejcir, Serbian national Veselin Laganin and former bouncer Jason Dominguez-Baya were arrested on February 12 this year and appeared in court the following day on charges of armed robbery — a schedule six offence carrying a maximum 15-year jail sentence — allegedly carried out at an electronics shop in Pretoria West in October last year.

In a gun battle that ensued Dominguez was allegedly shot in the arm. He was later traced to his house and arrested after police found his bullet-riddled Toyota Hilux in Fountains Valley.
The three have pleaded not guilty to the charges.

‘There is no case’
After his court appearance on Monday morning, Krejcir said that he was “disappointed” with the postponement adding: “I thought they would withdraw the case. There is no case. This is another delay tactic [by the state].”

The case has been postponed to May 11, to give the state time to hand over the case docket to the defence.

Earlier this year, during their bail hearing, Laganin claimed that the incident had its origins in his attempts to bring into South Africa €125 000 accruing from the sale of a house in Serbia.

However, as he had no bank account in South Africa, he had arranged to transfer the money through the owners of Ali’s Electronics, who are Pakistani nationals.

As he had left the shop, he had been confronted by four men who had robbed him R900 000 in sealed boxes.

He had asked Krejcir and two others to return to the shop in an effort to recover the money.

There, the owner had handed over R200 000 and promised to pay the balance, confirming their suspicion that he had been involved in the original robbery.

As they left the shop, Laganin said, they had again been confronted by seven men and who threw stones at them and robbed them. Domingues had been shot in the arm in a shootout that had ensued after he fired three warning shots.

At the time, sources claimed that Dominguez and Krejcir went to the shop to collect a debt. Three police sources linked to the investigation said that the incident flowed from a “drug deal gone wrong”.

Last week the case of medical insurance fraud against Krejcir was withdrawn.

Krejcir is accused of fraudulently claiming a R4.75-million dread-risk insurance payout from Liberty Life last year, based on a falsified medical report submitted by his then-urologist Dr Marian Tupy.

The charges were provisionally withdrawn due to an application brought to the South Gauteng High Court in Johannesburg last week by Tupy, the state’s main witness in this matter.

Tupy wishes to review the plea bargain process that led to an agreement reached with the state last year, in which he pleaded guilty for his role in Krejcir’s fraud case.