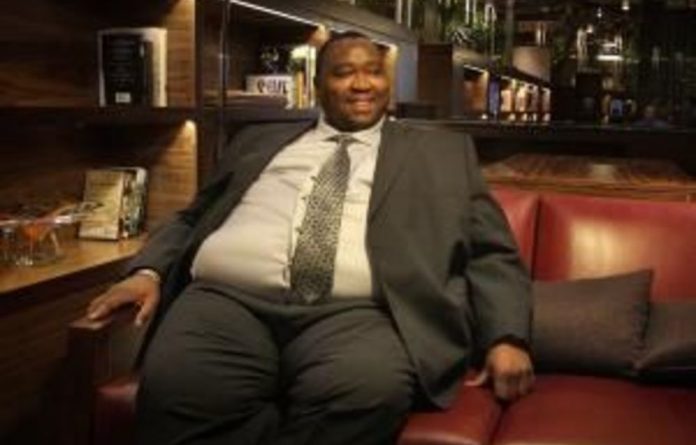 “I’m looking for the black bag of diamonds,” the car’s new owner jokes. He tries to get the boot open but the battery is dead and it isn’t budging.

So far, inspections of the BMW’s interior have revealed a McDonald’s Happy Meal box on the back seat, a condom in its wrapper, the partially mummified remains of what may or may not be a hamburger and — bizarrely — a bar of soap in the driver’s door. In a possible clue to the identity of the vehicle’s former owner, the front passenger seat is broken.

Until half an hour ago, this light blue 2002 3 series was the property of one Khulubuse Zuma, famous across the coutry as the politically connected businessman with the prodigious body mass index.

Attached by Protea Coin Security in February this year, the R15 500 the BMW fetched will hardly make a dent in the more than R10-million Zuma and his business partner Zondwa Mandela owe for security services at Grootvlei, one of the two gold mines at the centre of the ongoing Aurora saga.

Since 2009, Khulubuse has come to exemplify the worst excesses of crony capitalism and this auction is the first tangible sign that President Jacob Zuma’s nephew may get the comeuppance he so richly deserves.

So there is a certain air of schadenfreude at the premises of RR Singh, the sheriff of Inanda District Two in Verulam, north of Durban.

Scrooged
Three BMWs and various household items removed from Khulubuse’s home in Umhlanga Rocks are stored in the yard.

Examining the goods on display on a cold, overcast morning, I make three observations.

One, Khulubuse doesn’t look after his possessions. Almost everything on display looks worse for wear; the bar stools in particular have taken a beating and the cars barely merit the description “luxury vehicles”. Two, he’s a fan of LG, judging by the microwave, double door fridge and washing machine. And three, none of the good stuff is here. There’s no sign of the fabled Maserati or the gull wing SLS. The only items that have the bidders nodding in approval are the Anthem amplifiers. Very good brand, they agree.

The one truly desirable item, a Range Rover Vogue, turns out to be the property of the sheriff. Clearly, the job pays well. In contrast, the lavish lifestyle for which Khulubuse has become notorious — according to the stories in the press, he routinely spends R10 000 every time he visits the Oyster Box Hotel — is hardly in evidence.

It’s all a bit of an anticlimax.

Since he first came to the attention of the public in 2009, Zuma’s nephew has come to occupy a unique place in the South African psyche. No other public figure is quite so despised. Or, for that matter, quite so vast: the revulsion Khulubuse inspires has as much to do with his considerable girth as it does with his shameless greed.

He is a caricature made flesh, the physical embodiment of everything that is wrong with South Africa in 2012: the grasping self-enrichment, the corruption and conspicuous consumption, the appalling inequality.

While Khulubuse gave his fiancée a Maserati for Christmas, the destitute miners at Grootvlei and Orkney had to rely on handouts to survive.

‘Generous person’
As luck would have it, the night before the auction, Carte Blanche featured a story on Aurora’s looting of Grootvlei.

Soon enough, Khulubuse is a trending topic on Twitter. South Africans are still divided in many ways but when it comes to Khulubuse, everyone seems to agree. His is one of the few news stories in which it is reassuringly easy to take sides. A man who once told a newspaper “I’ve donated the other kidney … I’m a very generous person” has no redeeming qualities whatsoever and so it is safe for everyone to loathe him.

The 30 or so people who have gathered here on Trevenen Road are clearly locals, almost all of them Indian men who — judging by the good-natured banter — routinely attend auctions in the hope of picking up a bargain. Everyone’s very friendly. When they find out that the Times, the Witness and the Citizen are here, they’re thrilled. Even the sheriff, who’s not always pleased when the press shows up, is affable. “Pose for your picture,” members of the crowd call out to him when I whip out my iPhone for a shot. One of them asks why I’m here. “Khulubuse Zuma,” I explain. He smiles, pleased.

Everyone loves the frisson of notoriety and it’s not often that an event in this sprawling backwater — Verulam is a place you come from but don’t necessarily go back to — attracts national attention.

The bidding gets underway.

The first lot, an old BMW 5 series, fetches R14 700. Next up is the 3 series. The 2006 7 series goes for R88 000. The exterior still looks good, though the interior has seen better days. There’s a deep indentation in the drivers seat and the leather nearest the door is badly scuffed; clearly Khulubuse drove this one himself.

The dining room suite goes for R1 200; the microwave fetches R550. The 100cm Sony Bravia flat screen TV fails to raise much interest, going for R2 700. The brown leather lounge suite is the subject of something of a bidding war.

The only black bidder, a large man in an ANC tracksuit top, eventually falls out at R7 200. He clicks his tongue in annoyance; perhaps he was hoping to plant his posterior in the same leather that once cradled that of a Zuma. Later I see him trundling off with a lawn mower.

The amplifiers and the speakers go for more than the 5 series and the 3 series combined. “It’s a signature brand,” one of the onlookers explains, though he thinks they paid too much. In what is perhaps the most astonishing development of the entire morning, the battered bar stools go for R600.

Something to be desired
The sheriff moves on to the fridges and lounge suites and gym equipment belonging to other insolvent estates. The buyers of the cars examine their purchases. “Pose for the cameras!” the crowd calls to the buyer of the 7 series, who obliges. The car’s personalised plate, ENAMA ZN means “happy and contented”, and presumably that’s how Khulubuse felt when he first acquired it.

No doubt that’s how he still feels, since this auction will hardly have deprived him of the lifestyle to which he has become accustomed. Who knows where the sports cars or the white satin suits or the quad bikes are but they were certainly not here.

Earlier, Protea Coin’s attorney was quoted as saying, “It is not expected that the full judgment debt will be recovered from the proceeds of the sale.” This, as it turns out, is something of an understatement; the entire haul is a little over R160 000. Perhaps the creditors will have better luck when they go after Mandela.

There are no victors here and no justice has been done. Khulubuse has the last laugh, again. The next day, one wag tweets: “Khulubuse Zuma is very rich and seemingly unstoppable, but I take solace in the fact that he hasn’t seen his penis since 1989.”

It’s not much, and it can hardly make up for all the cigars or the Johnny Walker Gold. But in this grotesque pantomime of a corrupt elite showing its middle finger to the rest of us, it’s better than nothing.

One can only hope that somebody is still out there looking for the black bag of diamonds and all the other good stuff, wherever Khulubuse is hiding it.

The mines are heading for liquidation again
Read more
National

Sunday Times revealed at the weekend that President Jacob Zuma's lawyer is yet another prominent figure in Sassa's grants crisis.
Read more
National

The finalisation of liquidation proceedings should at least give them some temporary relief.
Read more
National

Khulubuse Zuma sold off his rich trappings and claims he is nearly broke – but liquidators believe there’s much more.
Read more
National

The nephew of the president has brought an end to the long-running Aurora-Pamodzi saga by agreeing on a settlement deal.
Read more
National

An oil deal originally fronted by Khulubuse Zuma is being probed by US authorities as part of a wider investigation into Och-Ziff Capital Management.
Read more
Advertising
Continue to the category
Politics