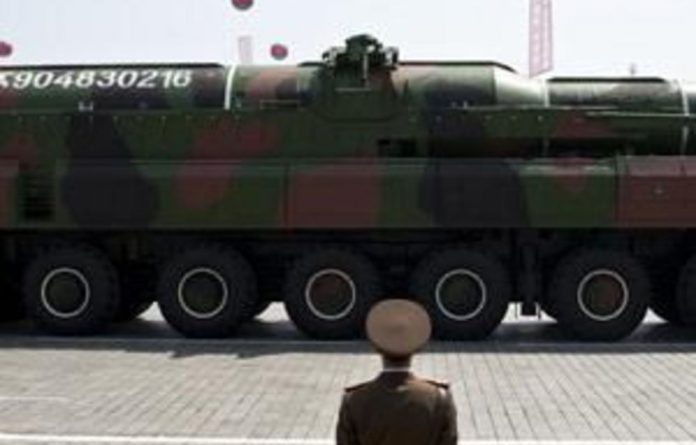 Analysts who have studied photos of a half-dozen ominous new North Korean missiles — showcased recently at a lavish military parade — say they were fakes and not very convincing ones, casting further doubt on the country’s claims of military prowess.

Since its recent rocket launch failure, Pyongyang’s top military leaders have made several boastful statements about its weapons capabilities. On Wednesday, vice marshal Ri Yong Ho claimed his country was capable of defeating the US “at a single blow”. And on Monday, North Korea promised “special actions” that would reduce Seoul’s government to ashes within minutes.

But the weapons displayed on April 15 appear to be a mishmash of liquid-fuel and solid-fuel components that could never fly together.

Undulating casings on the missiles suggest the metal is too thin to withstand flight. Each missile was slightly different from the others, even though all were supposedly the same make. They don’t even fit the launchers they were carried on.

“There is no doubt that these missiles were mock-ups,” Markus Schiller and Robert Schmucker, of Germany’s Schmucker Technologie, wrote in a paper posted recently on the website Armscontrolwonk.com that listed those discrepancies. “It remains unknown if they were designed this way to confuse foreign analysts, or if the designers simply did some sloppy work.”

The missiles, called KN-08s, were loaded onto the largest mobile launch vehicles North Korea has ever unveiled. Pyongyang gave them special prominence by presenting them at the end of the parade, which capped weeks of celebrations marking the 100th anniversary of the country’s founding father, Kim Il Sung.

That’s a big concern because, along with developing nuclear weapons, North Korea has long been suspected of trying to field an intercontinental ballistic missile, or ICBM, capable of reaching the US. Washington contends that North Korea’s failed April 13 rocket launch was an attempt to test missile technology rather than the scientific mission Pyongyang claims.

But after pouring over close-up photos of the missiles, Schiller and Schmucker, whose company has advised Nato on missile issues, argue the mock-ups indicate North Korea is a long way from having a credible ICBM.

“There is still no evidence that North Korea actually has a functional ICBM,” they concluded, adding that the display was a “dog and pony show” and suggesting North Korea may not be making serious progress toward its nuclear-tipped ICBM dreams.

North Korea has a particularly bad track record with ICBM-style rockets. Its four launches since 1998 — three of which it claimed carried satellites — have all ended in failure.

Though North Korea frequently overstates its military capabilities, the missiles displayed this month might foreshadow weapons it is still working on.

‘Clumsy representation’
David Wright, a physicist with the Union of Concerned Scientists who has written extensively about North Korea’s missile program, said he believes the KN-08s could be “somewhat clumsy representations of a missile that is being developed”.

Wright noted that the first signs the outside world got of North Korea’s long-range Taepodong-2 missile — upon which the recent failed rocket was based — was from mock-ups seen in 1994, 12 years before it was actually tested on the launch pad.

Theodore Postol, a professor at the Massachusetts Institute of Technology and former scientific adviser to the US Chief of Naval Operations, said the Taepodong-2 design remains the more real future threat — though even that remains at least a decade away — and the KN-08 is simply a smoke screen.

“I believe that these missiles are not only mock-ups, but they are very unlikely to be actual mock-ups of any missiles in design,” he said. “Fabricating a missile like the KN-08 would require a gigantic indigenous technical effort … The only way North Korea could develop such a missile with its pitiful economy would be if someone gave it to them.”

Much attention has been given to the 16-wheel mobile launchers that carried the missiles during the parade, which experts believe may have included a chassis built in China. That raises questions of whether China has violated UN sanctions against selling missile-related technology to Pyongyang.

Some missile experts say the launchers were designed to carry a larger missile than the 18m-long KN-08, and argue that North Korea would not have spent millions of dollars on them unless it has, or intends to have, a big missile to put on them.

But Wright said the launchers, like the missiles they carried, could also have been more for show than anything else.

“Given the international attention it has gotten from parading these missiles you could argue that the cost of buying the large trucks — which add a lot of credibility to the images of the missiles — was money well spent in terms of projecting an image of power,” he said. — Sapa-AP