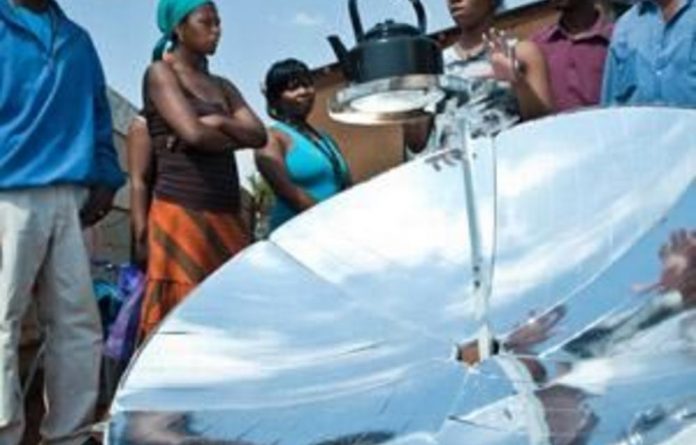 Harnessing the sun’s abundant power could provide a part solution for people who cannot afford escalating electricity costs. Its rays directed by curved dishes can cook food and boil water.

Cooking with the sun

Using the sunâ??s abundant power could be the solution for people who cannot afford escalating electricity costs. Channelled through simple, curved dishes itsâ?? rays can cook food and boil water.

“There are 300-million people in Southern Africa and they all need to cook. So solar cookers could be like the next cellphone,” said Crosby Menzies, owner of SunFire.

This realisation, reached while watching people using solar cookers in Zambia, started Menzies on a path to founding his business and crisscrossing the country to spread his dream. He even has President Jacob Zuma’s endorsement.

“At Cop 17 [Minister of Planning] Trevor Manuel came to look at my cookers and was so amazed he called the president over. Both of them said this is exactly what the country needs,” said Menzies.
But since then he has had no feedback from the government, not even when he has approached it.

“People just aren’t willing to believe that an idea this simple can change so much,” he said.

The way the solar dishes work is simple. They use a large area to focus the sun’s rays on a point where a pot or kettle is placed — just like the way in which you used a magnifying glass to burn holes in a paper.

He said, although overcast conditions meant only slow-cooking food such as stews could be prepared, South Africa enjoyed “extremely high radiation and a high frequency of sunlight”.

“This means you can harvest more than twice the amount of energy that you could from a similar appliance in Germany,” Menzies said.

He is a one-man operation so growth has been slow, but he is beginning to train agents to promote his product.

The township of Thokoza, east of Johannesburg, is one of the bases for his operation. Here Noluthando Lebaka plays the role of magician to the crowds who gather around the demonstration model in her parents’ yard. Pedestrians passing the house are lured in by the whistling of a kettle boiling on her solar cooker.

The 21-year-old tells her audience about the basic science behind the power of the sun. Then she takes a newspaper and puts it under the kettle. It bursts into flames and the crowd gasp in amazement. Many of them want to repeat the trick themselves — her stack of newspapers is burnt away quickly.

Her mother, Ntombifikile, has been using the solar cooker for several months and says it has saved her so much electricity that it no longer runs out half way through the month.

As most of the audience drift away with promises to call Lebaka, there are always a few who want to see the back of the solar cooker. They want to check for electrical wires that must be powering it. After a thorough search even the most sceptical are satisfied.

“I am amazed. I never thought the sun had this much power,” said Nyalakalo Sithembe.

But for many, even though it provides free power, the cooker is too expensive — the basic model costs R1 200. SunFire provides a lay-bye system to help people, but the uptake has still been slow. Lebaka has sold only five cookers this year.

Mona-Russia Bonase, an energetic woman, lives a short distance away, off the tar road and down a dirt track. Her father called her Russia because he was an ardent communist.

She is living up to her name and her father’s influence through her influential community empowerment organisation, Khulumani.

Bonase believes solar cooking can be an empowerment tool.

From her garage, which serves as Khulumani’s meeting place, she tells her audience: “Ours is a struggle for economic justice and we are not ­getting this.

“So let’s use this to show the government that we can be self-sufficient — only by being active can you stop being a victim and become a victor.”

Menzies’s biggest project is in the areas around Thohoyandou in Limpopo. There people have been quicker than those in Gauteng to adopt his product. They do not have electricity and normally cook with wood fires or paraffin. The solar cookers allow them to cook in their homes without the risk of fire or smoke inhalation.

To help subsidise the cookers Menzies has tapped into a carbon offset initiative in the United Kingdom.

Airline passengers can voluntarily pay a fee to the Tourism Industry Carbon Offset Service to offset the carbon emissions they rack up while flying. Because SunFire’s cookers replace conventional cooking methods, such as using electricity or open fires, they lessen the environmental impact these communities have on the planet. So money from the subsidy is used to reduce the cost of a basic model to R800 and because of this he has managed to sell 67 cookers in the area.