E-tolling splits ANC alliance on the road to Mangaung 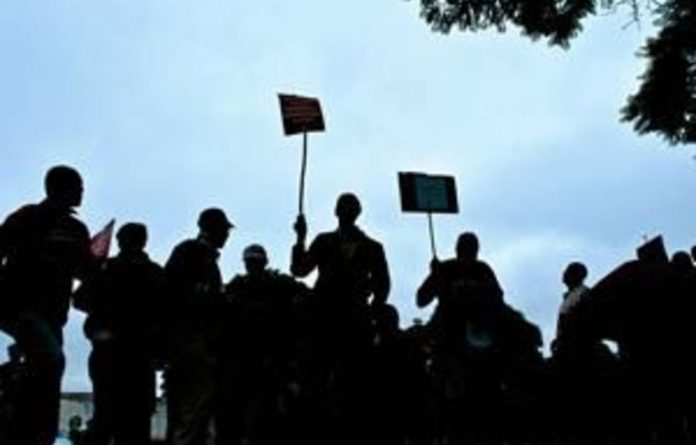 The imminent implementation of the controversial Gauteng freeway improvement project (GFIP) has caused sharp divisions between the ANC and its key alliance partners, trade union umbrella body Cosatu and the South African Communist Party (SACP), — who are blaming each other for implementing and benefiting financially from the project.

It is yet another manifestation of the factional politics in the party before its policy conference in June and its elective conference at the end of the year in Mangaung. The division also has the potential to affect major government projects.

Although Cosatu wants the e-tolls to be scrapped, the SACP is agreeing with the ANC that the project should be implemented, but also that there should be a comprehensive investigation into who benefited from the roads project.

Call for investigation
SACP secretary general Blade Nzimande said last Thursday at a party event that there should be ” an investigation” into those who conceived the roads project and who benefited from its implementation.

Although the SACP has not stated publicly who exactly should be investigated, it is understood that party wants the investigation to include current and former senior ANC leaders in Gauteng, including the party’s provincial chairperson, Paul Mashatile, former transport MEC Ignatius Jacobs and former premier Mbhazima Shilowa, who introduced the idea during their terms of office.

A senior SACP leader who spoke on the condition of anonymity said this week that from the onset Jacobs had been “a very strong champion of the project”.

“This project has the same personalities and same allusions as the Gautrain. What worries us — and it’s a principled stance that we took — is that we had opposed during the Gautrain that this GFIP only benefits a few. When the GFIP emerged, a multimillion-rand project, we [the SACP] sat down and said a proper investigation must be instituted to see if there has been a deliberate attempt to abuse the state system for narrow political purposes and to benefit a few,” the leader said.

Since the SACP called for a probe into the e-tolling system, the leader said, “we have been approached by politicians asking if we have information. We would really love to have this information.

“It’s quite suspicious that both tabs [the Gautrain and roads project] were taken by national [government]. We want to prohibit that comrades just enrich themselves. This must be an example,” the SACP leader said.

Dissatisfaction with Zuma
Mashatile and other ANC leaders in Gauteng are known to be opposed to the re-election of Zuma as ANC president and Gwede Mantashe as ANC secretary general. Some Gauteng provincial executive committee members have said the current leadership under him was the worst since the formation of the ANC in 1912.

Although the SACP wants Zuma and Mantashe to keep their positions, Zuma has come under fire from Cosatu for what it considers anti-poor policies, including the e-tolling system.

A number of prominent ANC leaders, through shareholdings in companies, have benefited from the construction of the projects. These include Human Settlements Minister Tokyo Sexwale, whose Mvelapanda Group owns a stake in Group Five, which was awarded R3.5-billion worth of construction tenders. Businessperson Moss Mashishi’s Matemeku TMT and former director of public prosecutions Bulelani Ngcuka’s Basil Read have also been contracted to do work for the roads project.

But a source close to the businesspeople said Sexwale and Mashatile “don’t do business together”. “If there’s one politician who hates Tokyo then it’s Blade [Nzimande]. He goes around telling people a whole lot of rubbish about Tokyo. He sees Tokyo as his biggest threat because he wants to be deputy president. As we get closer to the conference [Mangaung] you will see more people leaking info [to discredit each other].”

He said that Mashishi “was too much of Mbeki man for them to work with him [Sexwale]”.

Unlike Cosatu’s general secretary, Zwelinzima Vavi, who says the e-tolls would hit the poor most and must be scrapped, Nzimande believes the system will affect only the rich.

Trade union relentless
Cosatu has vowed to fight to the bitter end with a number civil society organisations, such as the Opposition to Urban Tolling Association, and plans to embark on a massive protest next month to force the government to review its decision.

The labour federation was set to meet the ANC on Thursday for the second time in less than two months to discuss e-tolling and its implications on the alliance.

At their first meeting two months ago, the parties deadlocked, with the ANC apparently “blackmailing” Cosatu by pointing out that it had also benefited through its investment arm, Kopano ke Matla, which holds 3% shares in Raubex, a company that was awarded an R800-million tender to improve the R21 road’s infrastructure. The story was leaked to the media in an apparent attempt to embarrass Cosatu.

Vavi said he had since instructed the investment company to disinvest in the roads project.

According to the South African National Roads Agency (Sanral), the project is expected to inject about R29-billion into the economy and approximately R13-billion into the provincial gross geographic product, creating nearly 30 000 direct jobs over its life cycle.

The electronic tolling system component of the bid was awarded to Austrian company Kapsch TrafficCom and a black economic empowerment component owned by Matemeku TMT.

Approached for comment, Mashishi said his company was awarded the tender after he delivered the best bid to Sanral. Matemeku TMT later sold its stake to Kapsch TrafficCom. Now Kapsch TrafficCom owns the majority of the shares (65%) and TMT 35 %.

“The reason we sold our 51% stake to Kapsch TrafficCom was because the GFIP required huge capital guarantees in the region of R2-billion,” Mashishi said. “There were no financial institutions in South Africa prepared to give such guarantees. That was when we looked at Kapsch TrafficCom to provide those guarantees and we then sold our TMT (Pty) Ltd stake to them.”

Tolling timeline: The long road from plan to reality

1998: The Gauteng transport department floats plans to toll freeways; estimates are between 10c/km and 15c/km.

January 2003: An environmental impact assessment on the proposed road expansions is submitted.

September 2009: Sanral announces the awarding of a contract for the implementation of Gauteng tolling.

February 2011: Sanral announces Gauteng toll fee structure at a base rate of 66c/km for motorists and a 25% discount for e-tag users.

Cosatu announces plans to embark on protest action against tolls.

October 2011: Sanral says improvement project has been certified “to be completely non-profit based”.

Ndebele orders a halt to the implementation of tolls due to insufficient consultation.

February 2012: Finance Minister Pravin Gordhan says tolls will be capped at R550 a month for motorists.