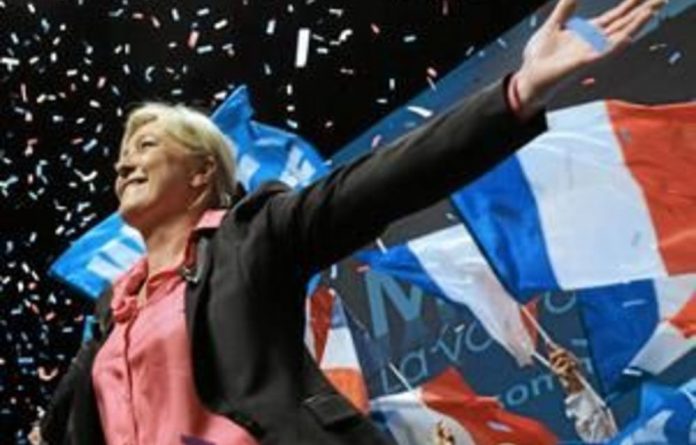 Leading France’s Front National to its best ever first-round result in her first presidential campaign, Marine Le Pen counts herself as the big winner, even if she vanishes from the ballot papers in a fortnight.

Like elsewhere in Europe — Austria, the Netherlands or Switzerland — the populist parties, which are usually dubbed the extreme right, frequently perform much better than predicted. That may be because voters are embarrassed to tell those conducting polls they will be voting for maverick rabble-rousers.

There is nothing new about the Front National’s pivotal position in French politics. The party has been well established for 30 years and Le Pen’s 18% of the vote on Sunday confirms that, if anything, its influence is growing.

But far or extreme right is a bit of a misnomer for the assorted rebels, mavericks and tub-thumpers usually grouped with the party. From Hungary and Sweden to Finland and Greece, extremists, racists, neo-Nazis, or simply die-hard conservatives occupy the ground held by what we call the far right. There are huge differences between, say, the militant street activists of Hungary’s Jobbik movement and the suited business lobby of the Swiss People’s Party.

But what the assorted leaders and parties have in common is a profound right-wing cultural ­conservatism suffused with nostalgia for a better and often imaginary national past — an era before mass immigration, globalisation and international finance destroyed, they believe, the old, white, homogeneous nation states of Europe.

On economics, however, the populists tend to be anything but right wing. They are further to the left of European social democracy in supporting generous welfare states, early retirement ages and good pensions — a strong state munificent in its public spending.

Le Pen’s Dutch equivalent, Geert Wilders, has just brought down the government in The Hague over a budget crisis and his refusal to toe Brussels’s line in cutting welfare benefits and pensions.
Le Pen already looks a more formidable and cannier leader of the movement in France than her father, Jean-Marie, whose crude anti-Semitism, racism and World War II revisionism made him the object of mockery. People do not laugh about Marine as they did about her father.

She has been fortunate in her timing because of two big contemporary issues fuelling the rise of illiberal populism everywhere in Europe, except in Germany and the Iberian peninsula — the eurozone crisis and Muslim immigration.

Islamophobia has become the new anti-Semitism for the current generation of rebels, whereas the age of austerity decided by Europe’s leaders as the answer to runaway debt, soaring deficits and a failing euro supplies fertile ground for the populist campaigners. Hence Le Pen’s and Wilders’s calls to return to national currencies and halt immigration.

Although they do not achieve their maximal demands, these campaigns set the agendas in national politics and force the mainstream parties to accommodate the extremists by meeting them halfway. In France, President Nicolas Sar­kozy sounded tough on immigration, Islam and passport-free travel in Europe to try to lure Le Pen’s voters. He failed. In the Netherlands, Wilders has propped up a right-wing government for almost two years by extracting policy concessions and has now triggered its collapse. In Austria, first the late Jörg Haider and now his heir, Heinz-Christian Strache, forced the political mainstream in his direction.

As the eurozone crisis drags on, things will get worse for ordinary folk who will bear the brunt of unemployment, slashed benefits, credit crunches, banking crises and company closures. The populists are well placed to benefit from the perceived failures of the mainstream parties and the EU governing elite. “Tomorrow belongs to us,” Le Pen, Wilders and the rest may be tempted to think. —