Outrage as students killed in anti-regime protests in Syria 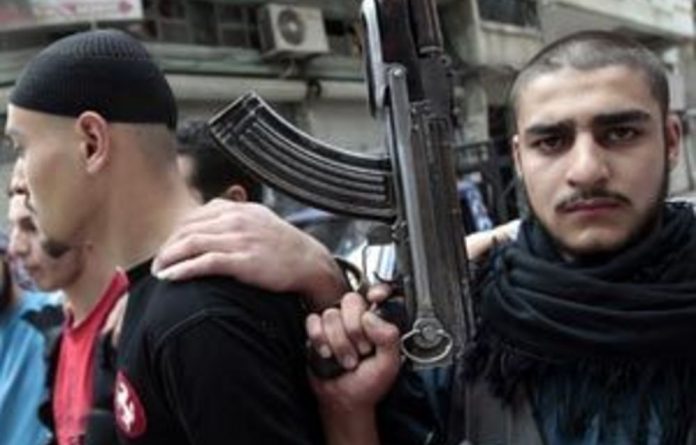 Syrian troops on Thursday killed four students and arrested some 200 when they stormed an anti-regime protest at Aleppo University, in the north of the country, a monitoring group said.

The Syrian Observatory for Human Rights said 28 students were also wounded, three of them critically, when government troops and armed supporters raided the campus during the night.

Activists said the raid was carried out in response to daily anti-regime demonstrations at the university in Syria’s second largest city.

“Security forces stormed the campus in large numbers at night and opened fire following a large student demonstration calling for the fall of the regime,” Mohammed al-Halabi, an activist on the ground, said via Skype.

The violence took place despite a UN-backed ceasefire that went into effect April 12 and the presence in the country of UN observers monitoring the truce.

A number of demonstrations took place across Aleppo in solidarity with the students after residents learned of the attack, said Halabi.

“The security forces have opened fire to disperse protesters,” he added.

Campus unrest
Earlier on Thursday, another demonstration at the campus was dispersed by tear gas, said the Britain-based Observatory.

Protests in support of the Aleppo students also broke out in several universities across the country, including at Deir Ezzor, in the northeast, Daraa to the south, and the capital Damascus, according to activists.

Elsewhere, another six civilians, including a woman and child, were killed by gunfire that targeted their bus near the town of Saraqeb in northwest Idlib province, said the Observatory.

The UN has accused both sides to the conflict in Syria of failing to abide by the terms of the ceasefire which it admitted was not holding.

The plan, brokered by UN-Arab League envoy Kofi Anna, calls for a halt to fighting, the withdrawal of heavy weapons from urban areas, a daily humanitarian ceasefire, media access, an inclusive political process, and the right to demonstrate as well as the release of detainees.

Some 300 unarmed UN observers are to oversee the truce. An advance team began arriving in the country last month and their number has slowly increased and is supposed to reach 300 in coming weeks.

Although the level of violence has gone down since the truce went into effect, there are still daily clashes and casualties reported among government troops and armed rebels.

According to Rami Abdel Rahman, head of the Observatory, more than 600 people, the majority of them civilians, have died across the country since the truce went into effect.

Regime revolt
Overall, more than 11 000 people have died in Syria since the revolt against the regime of Bashar al-Assad broke out in March of last year, according to the Observatory.

On Wednesday, 15 soldiers died in an ambush by rebels in Aleppo province and seven were killed in the Damascus region, according to the watchdog.

Despite the bloodshed, the head of a UN military observer mission said his team was having a positive effect, although he admitted the ceasefire was not holding.

Major General Robert Mood brushed off criticism that the UN Supervision Mission in Syria, or UNSMIS, had been too slow to get off the ground and said their numbers would double within days.

Mood was to hold a press conference later on Thursday.

Syria’s main opposition coalition urged the observers to visit detention centres, saying there had been an “escalation of arrests.”

“The Syrian National Council calls on the Security Council to pass a resolution demanding the Assad regime stop the escalation in arrests, murders and torture of detainees, and demand their release,” the group said on Wednesday.

It also called for the observers to count the number of detained and “carry out frequent and unannounced visits to the prisons” of those locked up in the almost 14-month uprising.

More than 100 000 people have been detained since the outbreak of the revolt against al-Assad’s regime, according to the Observatory, which puts the number still behind bars at more than 25 000. — AFP