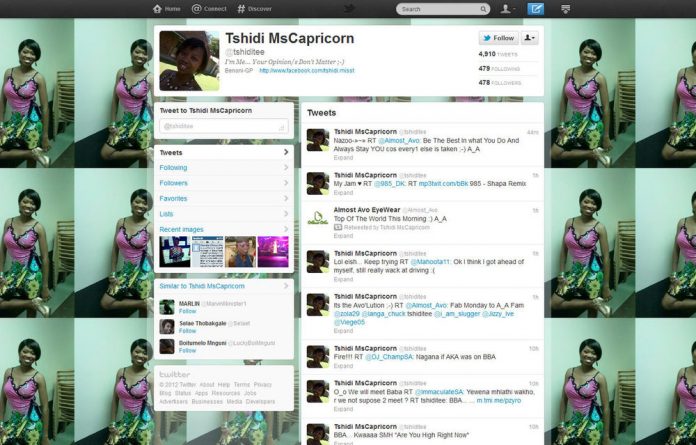 Tshidi Thamana tweeted: “Dear Mr Peter Mokaba … I wish all whites had been killed when you sang ‘Kill the Boer’, then we wouldn’t have to experience @JessicaLeandra’s racism [sic].”

Dos Santos tweeted on Thursday: “Just, well took on a an arrogant and disrespectful kaffir inside Spar. Should have punched him, should have [sic].”

Dos Santos, who was men’s magazine FHM model of the year in 2011, has since deleted the post. FHM disowned her and stripped of her Modelbook 2011 title.

One of her sponsors, QuickTrim, which makes weight-loss products, dropped her. Hundreds of people sent messages on Twitter expressing their dismay.

Thamana’s tweet drew widespread condemnation. It was later removed from the social networking site, although she initially defended herself: “Dear all … Why do people think I am a racist when I said it was wrong to be racist SMH [shaking my head] … Really!”

International relations and co-operation department spokesperson Clayson Monyela tweeted to her that her words amounted to hate speech.

“We have to value each other and not condemn each other,” she responded.

Although she initially declined to apologise, she crumbled on Sunday and tweeted: “Yes, racism is wrong and I apologise for the ‘kill all whites’ tweet … It was tweeted in anger.”

Later she added: “Dear SA, sincere apologies for the death wish for white people, it was tweeted in anger and yes, condemnation of each other is wrong.” — Sapa

The South African Press Association has allayed fears over the mandatory deletion of its stories from its subscribers' archives.
Read more
Friday

Malema sequestration to be argued in June

The matter would be argued in June, and that it would give Sars and Julius Malema time to file all the necessary court papers.
Read more
National

The magistrate said Sindisiwe Manqele, who has claimed self-defence, would have to comply with several conditions as part of her R10 000 bail.
Read more
Advertising
Continue to the category
Coronavirus