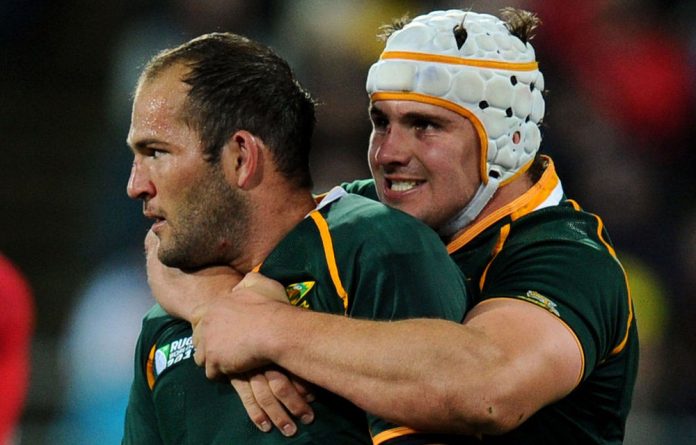 Du Preez, who won the 2007 World Cup and plays for Japanese club Suntory Sungoliath, said on Tuesday that he wouldn’t make himself unavailable for the three-Test series but it was time for South Africa to go with younger players — starting with his former Bulls provincial teammate Hougaard.

“I’m well aware that we have a wealth of talented scrumhalves, in particular Francois Hougaard, whose time has now come,” Du Preez said in a statement. “It’s time for the next generation to step up and I’m happy to help play a role if the coach calls on me.”

The 30-year-old Du Preez, who was one of numerous Springboks to retire or move overseas after last year’s World Cup in New Zealand, said he would help out the Boks “in a crisis” and was also happy to mentor younger players.

But he was committed to Suntory until his contract there ended in March 2013, he said.

Meyer took over as Boks coach this year and also has considering bringing lock Victor Matfield, who turns 35 this week, out of retirement as temporary captain for the England series, which starts on June 9.

Center Fourie said he doesn’t want to be considered for South Africa this season, while rumours of Matfield’s return to international rugby have stalled with the former Bulls second-rower yet to commit publicly to a comeback despite interest from Meyer.

Amid huge interest and media speculation in South Africa over the new captain, Meyer said he won’t name his skipper until the week before the first test against England.

Leading candidates Schalk Burger and Juan Smith are injured and unlikely to play against the English, possibly leading Meyer to think about the experienced Matfield or Du Preez as a temporary solution.