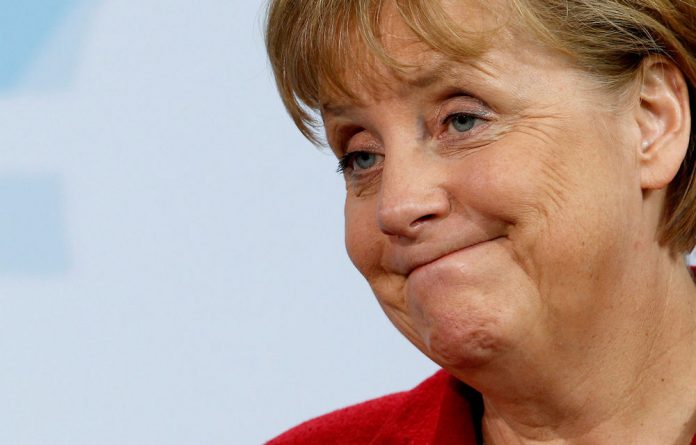 “The work in Europe is not affected” by the historic defeat suffered by her Christian Democrats (CDU) in Sunday’s snap election in Germany’s most populous state of North Rhine-Westphalia (NRW), Merkel told a news conference.

And she insisted that she saw “no conflict between solid budgetary policy and growth” after some questioned whether the crushing poll result was down to Merkel’s tough stance on austerity.

“Nobody on our side has anything against growth but the question is what it means for budgetary policy,” Merkel said.

The vote saw Merkel’s CDU score its worst ever result in NRW of 26.3% compared with 39.1% for the main Social Democratic Party (SPD) opposition, according to official preliminary results.

Merkel underscored the vote had been regional. “People knew that it was a regional legislative election and I was not up for election,” she said.

General elections
But the defeat marks a setback for Merkel, 16 months ahead of general elections in which she will seek a third term at the helm of Europe’s top economy during a time of financial turmoil.

On Tuesday, she will host France’s incoming president François Hollande after his inauguration. Their first meeting will likely be dominated by clear differences on the eurozone crisis with Merkel insisting on debt reduction and the new French leader calling for spending to boost growth.

The SPD has echoed calls by Hollande to place more emphasis on growth in the fiscal pact, a German-inspired accord, hammered out in March and signed by 25 of the 27 EU members for tighter budgetary rigour.

Merkel, who needs a two-thirds majority in Parliament to ratify the fiscal pact and will therefore require opposition support, also said she would hold discussions on it with opposition parties after next week’s informal EU summit.

“We will speak to each other and we will see what the mutual expectations are,” she told reporters.

Monday’s newspapers were scathing about the CDU’s regional defeat.

“Catastrophe for the CDU,” said the mass circulation Bild while Die Welt newspaper suggested that “Merkel’s CDU is trembling”.

Gero Neugebauer, of the Otto Suhr Institute for Political Science at Berlin’s Free University, said although Merkel had always denied the NRW vote was about support for her policy on Europe, it did leave her vulnerable.

Critics could argue that “she has a strong position in Europe but at home she can’t ensure her party achieves a good result in an important state legislative election”, he said.

The defeat in the Ruhr, Germany’s old industrial heartland, also “makes it still clearer to her that she has to look for a new coalition partner in 2013” to stay in power, political scientist Juergen Falter of Mainz University said.

Although her current coalition allies at the national level, the pro-business Free Democrats, confirmed a reversal in their fortunes after a string of humiliating regional defeats, it took just 8.6% of the NRW vote.

The campaign of the CDU’s main contender Norbert Roettgen, who is also Merkel’s environment minister, ran into trouble when he failed to commit to staying in opposition in the region if he lost Sunday’s vote.

He later had to backtrack after reportedly irking party allies by saying the NRW vote was a referendum on Merkel’s policy on Europe. – AFP