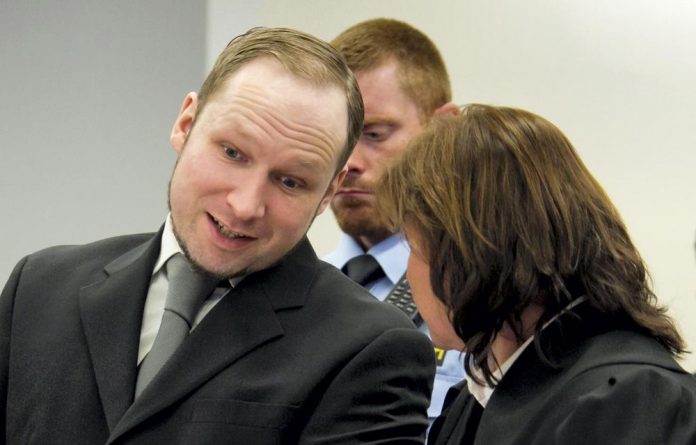 “We won, he lost. Young Norwegians know how to swim,” Frida Holm Skoglund (20) told the Oslo district court when asked if she had anything she wanted to say to Breivik.

In a change from the sobs that have so often filled the courtroom since the 33-year-old right-wing extremist’s trial began on April 16 over the killing of 77 people, Skoglund’s words drew discreet laughter from the audience.

Visibly nervous, she told the court how she had been shot in the thigh during Breivik’s killing spree on the island of Utoeya on July 22, and how she herself had pulled out the bullet.

“A friend told me I had been hit in the thigh. I thought it was a joke, that it wasn’t a real bullet,” she said, her voice barely audible, as Breivik – at her request – watched her testimony by video link from a separate room.

To escape Breivik, the young woman and several friends dived into the icy water surrounding the small heart-shaped island, and she recalled seeing the killer, dressed as a police officer, standing on shore of Utøya shooting at the people swimming away as he shouted: “Stop! Come back!”

Terrorist acts
Breivik has been charged with committing terrorist acts when he first bombed a government building in Oslo, killing eight people, before shooting dead another 69 in the July 22 rampage on Utoeya, where the ruling Labour Party’s youth wing was hosting a summer camp.

Most of the victims there were in their teens, the youngest having just celebrated her 14th birthday.

Breivik has confessed to the acts but has refused to plead guilty, insisting they were “cruel but necessary” to stop the Labour Party’s “multicultural experiment” and the “Muslim invasion” of Norway and other European countries.

On Monday, Marius Hoft, a withdrawn 19-year-old, also told the court how he had found himself trapped on the island with his best friend Andreas despite wanting to leave.

He described how he was forced to jump over “one body after the other” as he fled before hiding on the ledge of a cliff and suddenly seeing Andreas lose his grip and plunge to his death.

Hoft explained how he had been in deep shock and had been incapable of expressing any emotion when he was finally rescued.

“I was totally indifferent, not happy, not sad,” he said, before stepping down from the stand as he stared intently at Breivik, who was in the courtroom for his testimony.

Hidden in the woods
Two other young people wounded on Utoeya also took the stand as Breivik sat in the courtroom, describing how calm the killer had appeared during the slaughter.

Hit in the back, Lars Groennestad (20) recounted how he had hidden in the woods and covered himself with dirt to try to make himself invisible until real police officers could finally rescue him.

“Doctors said 15 minutes longer and I would not be here,” he said.

Silja Kristina Uteng (21) said she was hit in the arm – something she did not realise until later when she took off her jacket – and had also fled by swimming at least 600m to the mainland, despite her injury.

“I preferred drowning than being killed,” said the young woman, who remains deeply traumatised by the tragedy.

While Breivik is expected to be found guilty, his 10-week trial will help determine the tricky question of his sanity and whether he will be sent to prison or to a mental institution.

If the court finds him sane, Breivik will face Norway’s maximum 21-year prison sentence but that term can be extended for as long as he is considered a threat to society.

If he is found criminally insane he will be sent to a closed psychiatric care unit for treatment – a fate Breivik, who is intent upon showing that his anti-Islam ideology is not the ravings of a lunatic, has described as “worse than death”. – Sapa-AFP