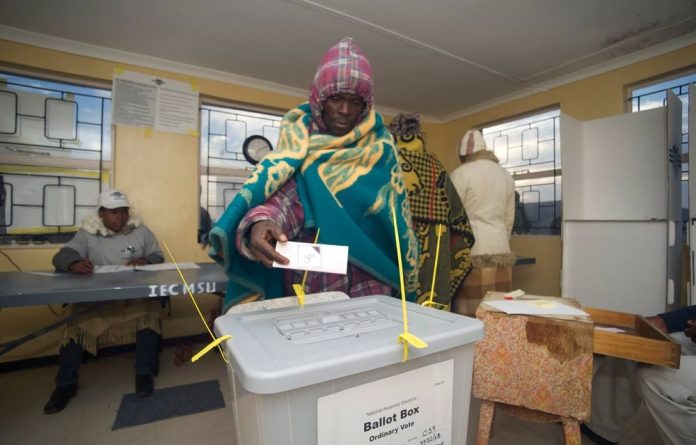 The 10-hours of voting in Lesotho on Saturday has ended at 5:00pm, although election officials said anyone still waiting in a line would be allowed to cast their ballot.

Ballot counting begins at each polling station right away, before the results are tallied in the capital Maseru. Final results are expected by Monday.

Prime Minister Pakalitha Mosisili, in power since 1998, is asking voters to give him another term in office at the helm of his new Democratic Congress.

His main rival is Mothejoa Metsing, the new leader of the Lesotho Congress for Democracy, the party that Mosisili abandoned in February.

Hoping to benefit from the split in the ruling party is opposition leader Tom Thabane, who heads another breakaway party, the All Basotho Convention.

Personalities over poverty
Voters began arriving long before dawn, many walking over hills and mountains while wrapped in blankets to wait in the cold outside schools and churches to cast their ballots.

The three main party leaders were all once allies whose falling out centred on the refusal of Prime Minister Pakalitha Mosisili to hand over the reins of power.

Lost in the clash of personalities are the worries of most ordinary Basotho. More than half of the nation’s two million people live in poverty.

Textile factories and diamond mines are the only major industries, but jobs are so scarce that many seek work in South Africa, which completely surrounds this landlocked nation.

Three quarters of homes have no electricity, one third have no running water, and nearly a quarter of adults is HIV-positive.

Many still travel by horse or donkey, bracing against the early winter cold by wrapping themselves in traditional blankets.

Despite the bucolic image, many voters said they want more jobs and better public services.

“I want better access to services such as clinics, hospitals and passports. I want our children to be educated and employed, said 50-year-old Mamotsamai Macheli, a small business owner.

“I want our children to be educated and employed,” she said waiting outside a cinder-block pre-school building in the village of Ha Mohalenyana, outside the capital Maseru.

Results to be honoured
Campaigning has proceeded peacefully, but many still remember Mosisili’s rise to power in 1998 elections, which were endorsed by observers but disputed by opposition protests.

“It was a nasty scene, which I don’t think anyone would want a repeat of that,” said Malawi’s former president Bakili Muluzi, heading the Commonwealth observer mission here.

He said Mosisili had personally assured him that the election results, expected by Monday, would be honoured.

“He told me he would be the first one to congratulate the winner,” Muluzi told Agence France-Presse (AFP).

“The way that I saw it, it was a personal discussion that I had with him, I think that he will accept the results.”

Voters are choosing lawmakers to represent 80 constituencies. Another 40 seats in parliament will be awarded under a proportional vote system. — Sapa-AFP