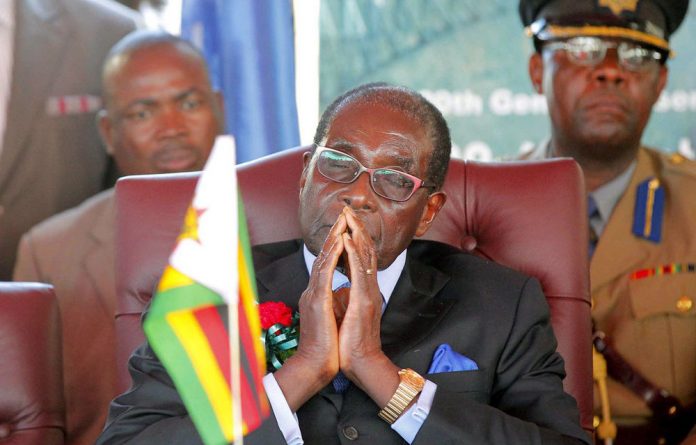 Despite reeling under sanctions imposed by the European Union and the United States for more than a ­decade, Zimbabwe President Robert Mugabe’s handlers have handed him the title of a United Nations “tourism ambassador”.

The new “honour” bestowed on Mugabe is part of early preparations by the country as it gets ready to host the UN World Tourism Organisation (UNWTO) general assembly in August next year alongside neighbouring Zambia.

Mugabe’s handlers in Zanu-PF have skilfully exploited the signing event to prop up his image and announce that the 88-year-old leader has in fact been chosen to be the UN’s tourism ambassador.

Political observers said the move by Zanu-PF was a strong indication of efforts to reinvent Mugabe.

Title attribution
In an emailed response to questions from the Mail & Guardian this week, Sandra Carvao, the organisation’s co-ordinator of communication, said: “Correct would be to say the UNWTO presented both presidents [Mugabe and Sata] with an open letter which calls for them to support tourism as a means to foster sustainable development in their countries to the benefit of their people.”

Said Carvao: “The UNWTO does not have an ambassador’s programme and the receiving of the UNWTO or the World Travel and Tourism Council open letter implies no legal commitment or title attribution to the country or the head of state or government in question.”

Walter Mzembi, the Zanu-PF-linked tourism minister tasked with leading the turnaround of tourism in the country, declared the veteran leader a “tourist attraction” and a “national treasure” that tourists would flock to see at the organisation’s meeting.

But Canada, angered by what it described as a “last straw” attempt by Mugabe to hijack the organisation’s general assembly, pulled out last week. The move was brushed off by Mzembi, who said Canada’s pull-out was a nonevent, given that 176 countries would be in attendance at the Victoria Falls and that Canada was not a major player in the global tourism industry.

However, in an effort to quell the row, the organisation announced that it had not appointed Mugabe in any official capacity.

Dilemma for the West
Despite the clash over Mugabe’s ambassadorial status, political observers say the matter highlights the fix Western countries find themselves in when dealing with Mugabe and Zimbabwe.

Political analyst Charles Mangongera said: “It is a huge dilemma for the West. Zimbabwe is such a beautiful country that so many in the West would love to visit, [but] the challenge is that Mugabe has been made the face of Zimbabwean tourism and the fact that he is an international pariah does not help. This case just underscores the difficulty of promoting investment in a country that has been battered, but more importantly it demonstrates the fact that it is folly to try to hijack international events for political expediency as Zanu [PF] has attempted to do.”

After years of economic collapse, tourism is on the rebound in Zimbabwe and the recovery has been underpinned by the big plans the government has embarked on for the organisation’s general assembly. Victoria Falls airport will be refurbished, and $300-million has been set aside to build a state-of-the-art convention centre that will seat between 3 000 and 5 000 guests, as well a five-star hotel and gymnasium.

International airlines have also made inroads into the country once again after a decade-long absence linked to political and economic uncertainty. The airlines have pledged to increase the frequency of flights to Zimbabwe as demand soars. Last year, tourism raked in more than $360-million, and the projection this year is that it will contribute 12% to gross domestic product.

Zimbabwe has continued to enjoy more international exposure. Last month, it hosted the African Tourism Association conference at Victoria Falls and was the 2010 chairperson of the Regional Tourism Organisation of Southern Africa.

Sylvester Maunganidze, the permanent secretary of the tourism and hospitality industry ministry, said: “We now have access to tourism meetings in countries that have imposed sanctions on us and we are taking advantage of that to repackage, rebrand and market the country as a safe tourism destination.”