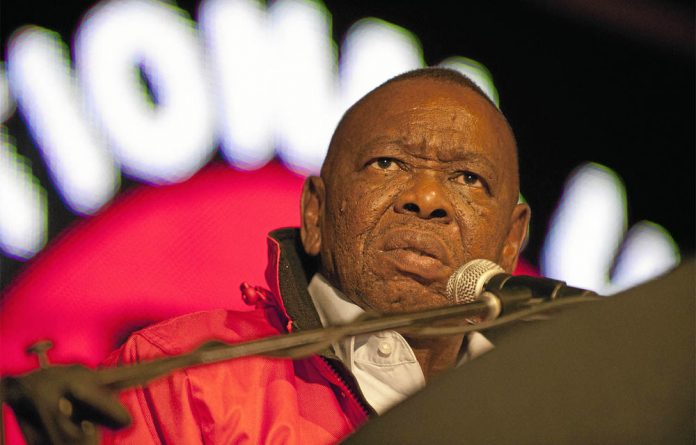 A strongly worded statement from the South African Students’ Congress (Sasco) in the Western Cape has lashed out at Nzimande over his assertion that FET students had turned the National Student Financial Aid Scheme into a “cash cow”.

“We cannot allow money meant to assist students with their studies and transport to be used as a cash cow. Any unused funds will be allocated in the following year … It cannot be abused. FETs are not social welfares and we do not give money for (cellphone) airtime. Those who ask for change must know, there is no change,” Nzimande was quoted in the Daily News as having told a press briefing in Durban last week.

“We are not only shocked but are taken aback to learn about his eloquence that seemed for a moment to purport a particular exceptional knowledge about the challenges that face us on a daily basis,” said Sasco in its statement.

Monwabisi Luthuli, Sasco’s secretary in the Western Cape, told the Mail & Guardian that they deemed Nzimande’s statement to be “narrow” and meant to “undermine working class people’s struggles”.

“It is a reckless and narrow statement of a person who does not understand what causes [students’] poor performance in the colleges,” Luthuli said. He denied students were abusing funds.

Too little
The country’s 50 FET colleges cater mainly for students from poor families. This year R1.7-billion has been allocated as bursaries for students in the colleges. The government wants to increase the number of students studying at these colleges to four million by 2030.

Currently over 437 000 students are registered at the colleges, which primarily provide vocational and practical skills training.

At the centre of the row is state financial aid for FET students’ transportation. Eligible students can claim up to R6 000 per year for transport but dissatisfaction with receiving less money when claiming drove a recent wave of protests in the colleges.

The higher education department appears to be under the impression that students at FETs claim for more than they used. Gwebinkundla Qonde, the department’s director general, said they gathered that students in the colleges were “demanding to be given the unused amount in instances where transport costs for the year were less than the full allocated amount of R6 000”.

But Sasco said students struggled to travel to class, as allocations were not enough and were never allocated on time. Some even resorted to sex work to raise money for transport, Sasco claimed.

“Where is Nzimande each weekend when we witness … our young college sisters of the working class between the age of 18 and 21 at Strand Streets in Cape Town and elsewhere selling their bodies in an attempt to generate money for travel allowance and other basic necessities,” said the organisation.

Sasco said it has “lost hope” in Nzimande “as a critical player of progressive realisation of free education at tertiary institutions and even at FET colleges as per the resolution of the ANC Polokwane conference”.