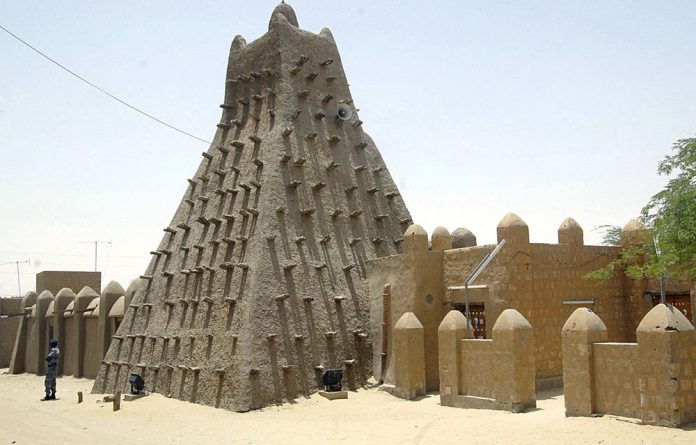 The Djingareyber mosque rose above my head, its impressive wood-and-mud presence standing out against the Timbuktu sunset. “Not bad for a building built in 1327,” I thought.

To my left, in a dusty open plot, my friend Borrie had joined in a game of football with some local Tuareg boys, his bright-orange army boots beacons in the dust.

To my right stood the large library built by the South African government under Thabo Mbeki’s leadership to house 150 000 manuscripts on science, religion, philosophy, arts and business, some of which date back to the 13th century. A tattered South African flag hung from a metal pole near the building, gently ­swaying.

This scene came to mind this week when I read the Guardian’s report on the destruction of tombs and manuscripts in Timbuktu.

Hard-line al-Queda-linked fighters, said to be from the Ansar Dine (Defenders of Faith), destroyed seven tombs in the Djingareyber cemetery near the mosque I visited in 2009.

The Guardian story quoted a local tour guide, who said the hard­liners had threatened to destroy the mosques too.

Ansar Dine spokesperson Sanda Ould Boumama said the group was acting in the name of God and would destroy every mausoleum in the city.

A coup that took place in Mali in late March this year has created a vacuum that allowed Tuareg separatist rebels to take over the north of the country. Their aim: an own independent state.

Fighting by their side was the Ansar Dine, which has since sidelined the Tuareg rebel leadership in Timbuktu, according to the Guardian report. This led to the current destruction.

As I read the horrific story, I thought about the people of ­Timbuktu, such as Miranda from Canada and her Tuareg husband Shandouk, who ran a guesthouse called the Sahara Passion where we spent three great nights.

I remember Shandouk taking me up on the roof of his home with a pair of binoculars so that we could watch the camel caravans coming into the city. He explained how the Tuareg navigated the desert by using the stars and how they planned their journey from one water source to the next, something they were taught from a very young age. It was a fascinating glimpse into an ancient way of life.

Miranda emailed me when the coup took place and the rebels began taking the northern towns to let me know that they were safe.

“My husband, son and myself have left Mali and are in Canada with my family,” she wrote. “We are concerned and keeping in contact with our relations in Mali, particularly Timbuktu, as well as those scattered in refugee camps in neighbouring countries. So far everyone is well.”

For many in Timbuktu, escape to Canada is not an option and one wonders what it is like to be there now as the tension escalates and the intolerance of the Ansar Dine becomes more overt.

I am overcome by an immense sadness, because something needs to be done urgently.