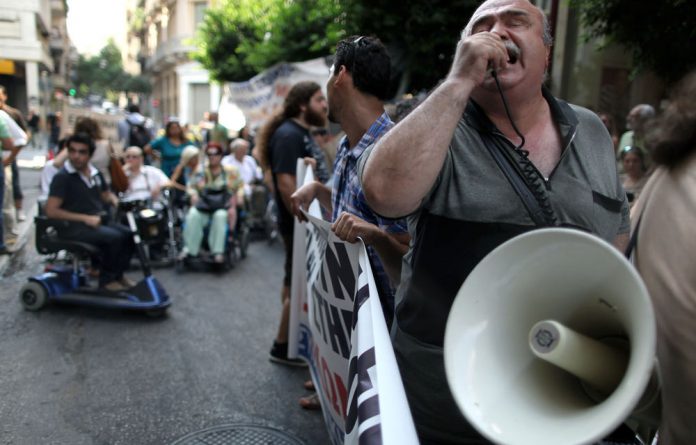 The banner said it all: "Imagine: disabled and poor." The sight of wheelchair-bound protesters demonstrating outside the Greek Parliament against the latest round of cuts that Athens must enact in return for rescue loans reinforced the uncomfortable truth that, in the country where Europe's debt drama first began, the crisis is far from over.

While politicians were fixated on Germany's constitutional court ratifying the eurozone bailout mechanism and the general elections in Holland last week, Greece's three-party coalition was locked in fraught negotiations over a new €12.5bn austerity package. The cuts in disability benefits, ordered by debt inspectors from the "troika" of lenders at the EU, ECB and IMF, threw into sharp relief the tough process that the weakest member of the eurozone is being forced to suffer.

For the first time in living memory, military personnel took to the streets alongside police officers, fire brigade officials, teachers and doctors as Greeks vowed to resist further pay and pension cuts that have already led to plummeting living standards.

This week, before a general strike scheduled for September 26 — the 17th this year — judges will walk off the job, shaking one of the central pillars of Greek society.

Nearly three years into the debt crisis, the mood among Greeks has shifted from one of bewilderment and shock, borne of seeing their seemingly robust economy collapse almost overnight, to fury and fear as poverty and panic spread.

Increasingly, ordinary people are speaking of "blood being spilled" and even "civil war". After the hiatus of a long summer, there are few who doubt that Greece is about to enter an autumn of mass discontent as the endless efforts to keep bankruptcy at bay move into a menacing new phase.

"The situation is terrible," says Vassilis Grillas, a cab driver. "Every day, I see people who are in an awful state, who can't pay their bills — who, like me, are afraid that their homes will be confiscated because we all owe so much more than we have. If they keep on pushing us like this, blood will be spilled. Everyone will revolt. There will be a mass uprising for sure."

With about 1 000 jobs reportedly being axed every day, the statistics agency Elstat announced last week that unemployment had reached an unprecedented 23.6% — compared with 16.3% a year ago. The surge mirrors the dramatic decline in GDP in a country that has been plagued by recession for the past five years.

On Friday, as eurozone finance ministers met in Cyprus, the current holder of the rotating EU presidency, it became clear that Greece will have to wait at least six weeks before lenders decide whether it deserves the next €31.5bn instalment of aid, which is crucial to recapitalising Greek banks and the cash-starved economy. Deliberations over the loan, which was initially due in July, have put Athens's fragile coalition on tenterhooks.

Despite the IMF and EU both signalling that Greece will be granted the two-year extension it has called for to implement unpopular fiscal adjustment policies, the parties supporting the three-month-old government still find themselves in a difficult position: all three campaigned on refusing to endorse austerity measures that hit the most vulnerable members of society hardest.

As creditors continue to insist that painful cuts are the price of further aid, politicians from the Greek president downwards have voiced fears that Athens is being pushed too far.

Last week, President Carolos Papoulias decried the policies, telling visiting Canadian officials: "We've been given a merciless lashing. I think we have paid enough for our mistakes, and Europe must realise that it needs to help Greece."

The normally mild-mannered octogenarian expressed concern that the foundations of Greek democracy were being imperilled. The sight of police and senior naval and army officers taking to the streets last week prompted government officials to voice similar fears. Some spoke privately of "the quiet before the storm" amid anxiety that the prevailing uncertainty has prompted a rise in extremism. The far-right Golden Dawn party is not only gaining in popularity but increasingly taking law and order into its own hands, with attacks on immigrants nationwide.

Although there has been a discernible change in attitude towards Greece among fiscal hardliners in the EU led by Germany, the death spiral in which the economy finds itself — Greek debt still accounts for 166% of GDP — shows little sign of reversing. That has added to the mood of fury and fear, provoking criticism even among reform-minded Greeks of the troika and its policies.

"They don't seem to care about the country, all they seem to care about is balancing the current account and budget, re-financing debt that is non-sustainable," says Theodore Pelagidis, professor of economic analysis at Piraeus University. "No attention is given to improving competitiveness or the production markets. These are home economics, not the economics that should be applied to a country." – guardian.co.uk © Guardian News and Media 2012