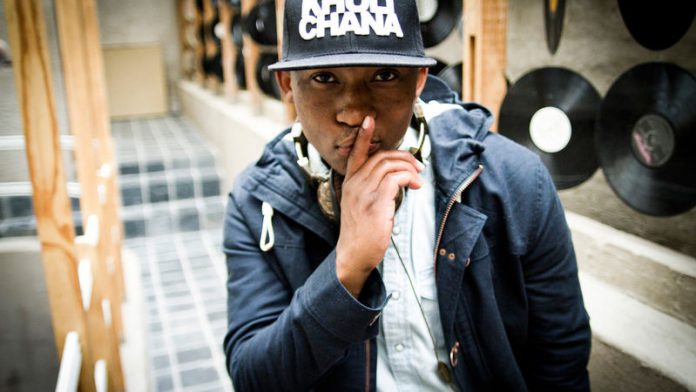 Confidence or arrogance: there's a thin line between the two, and the latter is most likely to be the case when talking to hip-hop artists. But that's not the impression one gets upon meeting 2012 Channel O Music Video Awards nominee Chana.

He is warm and friendly, with easy confidence he can back up with a number of accolades already behind his name.

Khulani Morule is a Motswako rapper from Mafikeng who has worked to be one of the most respected artists in South African hip-hop.

Motswako is the mixture of Setswana, English and other vernacular languages in rap lyrics.

In the early 90s Chana was one third of popular hip-hop group Morafe.

"What sets me apart from other rappers is that I run my own race. You can roll me in on a Kwaito beat, on a hip-hop boombap – not really big on pop but if it sounds straight I will rap on it. I am a big believer in if it stinks it stinks, if it's dope it's dope."

He describes himself as being his own biggest competition – a legend in the making.

While critics say South African hip-hop has become lost in wealth rap along with American accents, Chana believes the genre in South Africa has evolved.

As for what he is contributing to hip hop, Chana says he is the game-changer.

"I set the tone. I decide it is time. For example I was the first hip-hop artist to shoot a music video on a red epic camera – the same camera that was used to shoot Spiderman 3. So I make moves like that. It goes beyond just the music."

Many say Chana has been successful because he comes alive when he raps in "Tswenglish",  which is Setswana mixed with English.

He says Motswako was more challenging – which is what he needed.

"We all started out rapping in English but I figured you know what, why not Motswako? A big brother of mine, Prof Sobukwe, who is a pioneer of Motswako music, said that he thinks I have a great flow and wanted me to rap in Setswana as a dare. I did one verse and it has never been the same since."

Chana finds it is more interesting to write music in his mother tongue.

"It makes it so easy for the regular guy to be able to identify with you. For me I wasn't just trying to relate to the hip-hop fan. I wanted to relate to the layman, the average guy on the street, from little kids to the elderly."

One of the highlights of his career was to open for Drake during his South Africa tour which he says was both a challenge and an honour.

"Wow, the production was amazing. Performing on that stage was huge because I got too used to performing on crates and small stages."

Speaking to Chana, one could be forgiven for slipping into thoughts of how someone can be so sure of their greatness and call himself one of the top hip-hop artists in the country.

But this could be true, considering his large following and his 2009 Channel O Music Video award for Best Newcomer, among his other honours.

This year he was nominated in three categories, Most Gifted Male Video, Most Gifted Hip-hop Video and Most Gifted Video of the Year. All for his single Tswaa Daar – his sixth, and what he calls one of his best, music videos.

"The concept of the video was based on the song and my worry with the song was that it is a bit dark. It's what we call a boombap hip-hop classic, that golden era of hip-hop. The sound reminds you of Wu Tang Clan, underground hip-hop."

Chana says this is something he wants to revive.

"It was a trigger of nostalgia, a time travel machine. Let's go back to when hip-hop started and we got that right," he says.

"The video wasn't about the girls and groupies, it was more about performing."

Chana and his team put out a call on Facebook and Twitter to invite some of his fans to participate in the video and says  he believes strongly in involving fans in what he does.

"Geez, I owe it to them. I know what it is like to be a fan. It was fun, there was no diva. Everyone was humble. I felt loved and appreciated."

As for where to next, Chana says: "I am on to an entrepreneurial phase and it is not easy. Becoming a leader is a bit challenging right now. I have a clothing label I am working on, a record label I am pushing for and I am performing with a band these days. It is just all on a whole new level and it is not easy. I am not the underdog I used to be, that was very easy. Now I am in the top three and that is something you've got to maintain."

Will you find his name in the tabloids? Not a chance. Chana says although he is not squeaky clean he makes a conscious effort to steer away from gossip and controversies.

"I am out here grinding for my family. I was raised by a single mom."