Presidential spokesperson Mac Maharaj, who extended the invitation to Shapiro, said a debate would help "create an environment of dialogue rather than confrontation", the Star reported on Tuesday.

On Monday, the suit against Shapiro and the Sunday Times over the Lady Justice cartoon was formally withdrawn.

Charges were laid against Shapiro and the Sunday Times in 2008 after it published the cartoon, and Maharaj labelled Shapiro's cartoon racist, adding it was informed by "ingrained prejudices" about African male sexuality.

Maharaj said: "Let's look at [the cartoon] through the multicultural lens of South Africa … in an atmosphere where we can listen to each other and stop pretending that any one individual has the infallible answers to all our problems." 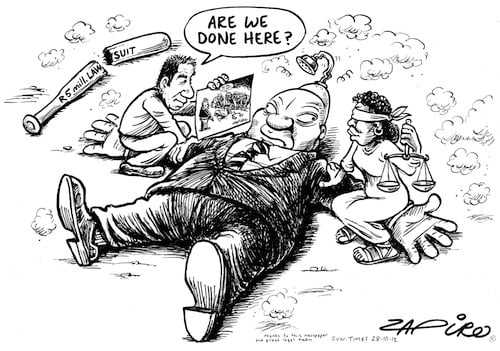 'Ingrained prejudices'
Shapiro told the newspaper he considered this a deliberate "red herring" but found the idea of a public debate intriguing.

"I'm never one to shy away from debate but in this context we have won a total victory [i.e. the withdrawal of charges], and they're trying to score points now."

Zuma initially wanted R5-million but the amount was later reduced to R4-million. He subsequently dropped the charge of impairment of dignity and further reduced the amount to R100 000 for defamation and an unconditional apology, before dropping the case entirely.

"President Zuma did the right thing in withdrawing the case. This bodes very well for media freedom," Dario Milo, who represented the Sunday Times, said.

"It is to be hoped that he swiftly withdraws his other 12 live cases against the media. This will send out an important signal that the president respects the right of the media to criticise his conduct."

Damages to reputation
The withdrawal ends a four-year saga that began in 2008 when Zuma sued for R4-million in damages to his reputation and R1-million for injury to his dignity.

With Mangaung around the corner, Zuma's legal team seems to be doing all they can to avoid a damaging legal showdown with Shapiro over his cartoon.

The dramatic changes to the claim come two years after various delays on the part of Zuma's lawyers.

"It was due to start on Thursday and that date has been in place since February. But they've used the same tactic that they've used in other cases, where they sue and then they make all kinds of adjustments and changes – it was clear that they didn't want to go to court ahead of Mangaung," Shapiro told the Mail & Guardian. "But we dug our heels in and said we had to get into court and we're confident of our case."

There just hasn't seemed to be a good time for the president to take on Shapiro.

With Zuma being pitted against his deputy Kgalema Motlanthe, he now faces a similarly sensitive period where he would want to avoid a court appearance and the negative attention it might attract.

Furore
Shapiro's illustration caused one of the biggest furores South Africa has ever seen over a cartoon. Some politicians were infuriated that the cartoon appeared to invoke memories of Zuma's rape trial in 2005, at which he was acquitted of the allegations against him. People went on public platforms to intimidate Shapiro and incite crowds against him. "But I did not let them put me off my stride," said Shapiro. "Caving in is the worst thing to do. I don't want to cave in to political bullying or thuggery."

Before he became president and shortly after the cartoon appeared, Zuma sent a letter of demand asking for R7-million in damages.

Later in 2010, as president, he launched a court action, which Shapiro first heard about when a sheriff arrived on his doorstep in Cape Town with a demand for R5-million. At the time, the Sunday Times's legal team described the sums being sought by the president as "exorbitant amounts with the ulterior purpose of intimidating the media, the Sunday Times and Shapiro".

Zuma claimed in his court papers that the intention behind the publication had been for the cartoon to damage his reputation and dignity.

The newspaper's legal team stated in its plea that it saw things differently. "The cartoon was comment made honestly and in good faith on matters of public interest, namely the public conduct and statements of the plaintiff, the ANC, the ANC Youth League, the SACP [South African Communist Party] and Cosatu in their efforts to undermine the plaintiff's prosecution on serious criminal charges."

Milo said the case required the court to consider the newspaper's and Zapiro's defence of "honest comment and truth regarding the cartoon, which alleged an abuse of the justice system in 2008".

In Zuma's court papers it is claimed that the cartoon was intended to show readers that the president was "in the process of abusing the justice system in as vile, degrading and violent a way as the raping of a woman".

It was also further intended to mean that the president "enthusiastically utilises" the ANC Youth League, the ANC itself, the SACP and Cosatu "to enable him to abuse the justice system". – Additional reporting by Sapa