Rankin’s favourite DI is back on the beat 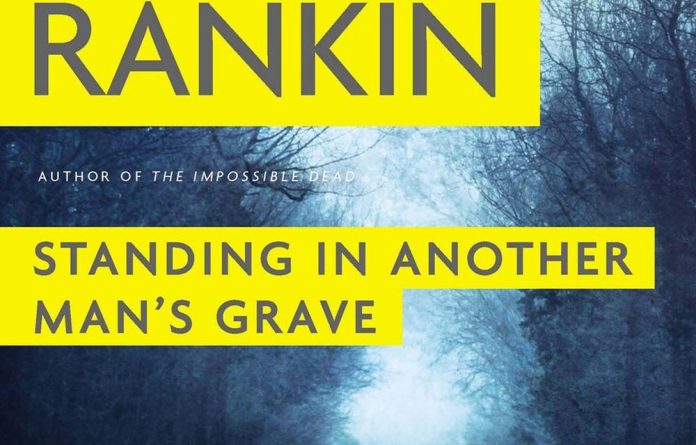 STANDING IN ANOTHER MAN’S GRAVE by Ian Rankin (Orion)

The 28th work of fiction from Scotland’s most successful crime writer turns on five ominous disappearances — young women who went missing over a 10-year period close to a major road running from central Scotland to the coast — and an entirely welcome reappearance. DI John Rebus, retired in 2006 after 18 cases in line with Ian Rankin’s hyper-realistic policy of ageing his characters in real time, has now returned to work, again in line with actual police procedure, as a civilian consultant on cold case inquiries.

Complicatingly, in the publishing equivalent of a man coming back from the war to find his wife married to someone else, Rebus bumps into Rankin’s new literary partner. Malcolm Fox of the ethics and standards division — hero of Rankin’s two most recent police books, The Complaints and The Impossible Dead — is horrified to discover that the cop he regards as “the loosest of cannons” is back on police business, and reactivates the “whole shelf” of complaints made against Rebus during his career. Fox’s hope is to prevent Rebus from corrupting his former sidekick, Siobhan Clarke.

The sections in which Rankin’s two characters find themselves in the same book are fascinating psychologically because the author so clearly lets the older man have the better of the exchanges. When Rebus notes Fox “sliming” around headquarters and reflects that he seems more like “middle management in a plastics company”, it’s clearly what Rebus would think about the interloper, but also usefully channels a resentment that Rankin readers must inevitably feel about the loss of their favourite cop. There is also the tantalising possibility that Rankin is employing Rebus to express his own equivocations about the replacement character.

Although their behaviour seems starkly contrasting — Fox sipping Appletiser, Rebus swigging beer and whisky — one sentence suggests that the men are more similar than they, or we, may think: “Fox had ceased to take alcohol because he was an alcoholic, while Rebus continued to sup for the exact same reason.” That line links to the Jekyll-Hyde divide that runs through Scottish literature and, indeed, the early Rebus novel Hide and Seek. If there is another double novel, Rankin could usefully make more of this conceit.

Admirers of the Rebus books will be relieved that the hero has returned with little change except an increase in the severity of warnings from his doctor. His closest emotional relationship is still with his car — a Saab almost as battered as he is — although there are encouraging signs of further reconciliation with his daughter.

Although some elements of Rebus are generic (troubles with drink and women), he is without doubt the funniest among the classic fictional detectives and his 19th case features some fine one-liners and a satisfying gag involving a bossy colleague’s stapler. Standing in Another Man’s Grave is a less convoluted puzzle than many of the Rebus novels (the solution becomes decipherable relatively early), but it is Rankin’s most interesting book politically, marking a vital stage in the consideration of Scottish nationalist sentiment that has been a constant background to the series.

Although this book has only one direct reference to the prospect of Scottish independence from the United Kingdom, it is steeped in the feeling of a country on the cusp of potentially radical change. Because the disappearances are connected by a trunk route — and relatives and suspects have moved or retired to distant parts of Scotland — the novel has the structure of a road movie, with Rebus repeatedly cajoling his straining Saab around the nation: to Glasgow, Aberdeen, Aviemore, Inverness, Cape Wrath and, ultimately, the Black Isle peninsula in the far north where dolphins are seen in the sea.

Obscure or poetically named locations are a motif in the book. At one point, “Inchnadamph” (a remote hamlet) is flagged up as a potential crime scene by a cop who is accused by Edinburgh colleagues of having made it up to tease them. And, on one of his epic criss-crossings, Rebus notes “signposts pointing him to places he would most likely never visit, such as the [villages of] Waltzing Waters and Killiecrankie”.

Pointedly, during his tour, Rebus is reading a book about Scottish myths and legends; in a novel that says hello again to a beloved character, Rankin seems explicitly to be examining the prospect of Scots saying farewell to their past. On one of his trips to the northern coast, Rebus notes the landscape is unlikely to have changed in a thousand years. Later he is given a riff about the country he comes from: “A nation of five million huddled together as if cowed by the elements and the immensity of the landscape surrounding them, clinging to notions of community and shared history.”

From this book, my guess is that Rebus — if the polling station is close enough to a pub or distillery — will vote no in the upcoming  referendum on Scottish independence, with the younger Clarke saying yes. Cheeringly, it seems clear from the final pages that there will be more Rebus books to chart the next stage in Scotland’s story. — © Guardian News & Media 2012