Mangaung Maskandi: Who are you calling an intellectual zombie? 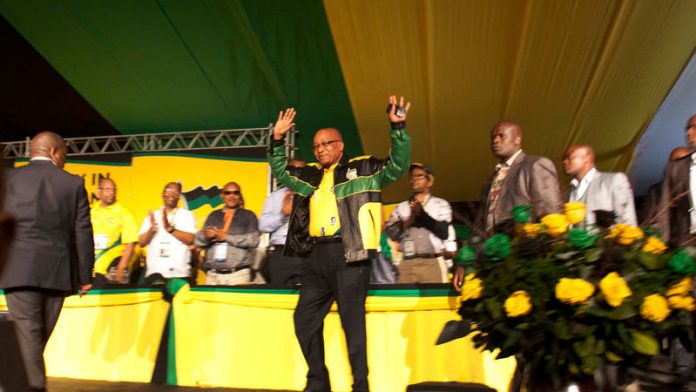 Met an old friend from the last conference at Polokwane in 2007, Sanele Moroka.That counter-revolutionary rag, the Mail & Guardian made Moroka insufferably popular at Polokwane by printing his daily diary.

Now, more than ever, Moroka resembles his namesake, the ANC president that no one really wanted, James. Five years ago Moroka was a man wanting to be a woman and keen on a sex change. It didn't work out. Now he just wants Change.

Anyway, I don't have much time for his troubles, thanks to the relentless choir practice schedule that the Nkandla Brigade comrades have arranged. Nonetheless, I must record that Moroka's main purpose at Polokwane, much like your Khulubuse Zumas, was to build the sort of relationships that would lead to raising enough sugar-daddy funding for an operation.

Sadly, it was botched. I found Sabelo wandering around the University of the Free State campus, a gibbering wreck during the registration of ANC delegates on Saturday: instead of going for his raisins, it seems the state doctors removed his nut. Lobotomies are not fun.

I must diarise dropping by policy discussions on healthcare to raise this with the comrades – if I can find the time. These smooth Forces for Change tsotsis make out that us delegates from KwaZulu-Natal are just a herd of voting cattle here to drink, eat and vote, but we've been working hard practising our songs too.

It's been a six-hour day singing-training schedule since the policy conference in June and I've already learnt one whole new song. Now that is commitment to the national democratic revolution. National conferences are not unlike maskandi concerts, anyway: lots of jiving and preaching and – despite the absence of umqombothi – enough liquor to make even the president's third wife, the swollen one who looks like she's constantly having an allergic reaction to seafood, look a little fetchier.

And u-JZ is a damn fine choirmaster – which is why I'm backing him for a second term. Was there a dry eye in the house when he broke into song remembering Madiba at the start of the national conference on Sunday? "Nelson Mandela told his supporters that this journey is very long and he told them that they will meet on Freedom Day." Sniff. That voice. How the delegates cheered. A few more songs and a shorter speech would have gone down well, though. I must propose that the party releases an album every month – music feeds the hungry much more than bread ever will.

On a different note,  I'm tired of these smooth-as-Blue-Label Forces of Change tsotsis suggesting that people like Moroka and I are intellectual zombies and that there is a paucity of ideas and rationality in the ANC. So Trevor Manuel has declined nomination to the NEC, as has Jeremy Cronin – who needs them, mah Com'? Cronin is no match for the likes of Moroka – the comrade's poems are too short, and he seems to think there are problems with our national democratic revolution.

I mean, who writes this sort of intellectual fluff, like his 1999 poem, The Trouble With Revolutionism?

We were seized with revolution
We almost entirely forgot reform…
Of family, workplace, bureaucracy, police force …
Having abolished the bosses,
We became the bosses.
(In the name of the workers, of course)

The Prez is doing a great job of transforming our national intelligence and police – and I got my new identity book in a month. uJZ said at his opening address that this is one of the major gains during his administration.

Hayi! Give me Big Nuz over Cronin any day. Now that is urban poetry for the new generation – these so called "intellectuals" are out of touch.

Cyril Ramaphosa and Patrice Motsepe are the sort of bosses we want in the mining sector, m'chana. I mean, Motsepe looks after his workers. That R25-million handshake to get rid of Johan Neeskens as Mamelodi Sundowns coach must surely be the new standard for the miners at African Rainbow Minerals?

A comrade from the Western Cape was telling me on the way to the conference opening that uJZ knows the poor. "Zuma is a man of the people who knows what is happening on the ground – these intellectuals like Manuel do not, that is why they can't respond to the economic needs of the people, so it's not that big a loss if he is not on the NEC."

Sharp analysis, m'chana. Which is why I'm glad the government is allegedly spending all of that R240-million on Zuma's Nkandla kraal – the president needs to be in air-conditioned comfort when he deals with the problems of the rural poor.

These comrades know that ANC membership means poverty alleviation through positions in government, jobs and tenders. Now how is that stupid, stupid?

Nkosi Luthuli is a Maskandi artist from KwaZulu-Natal, a branch delegate and the Mail & Guardian's undercover diarist at the conference.