Mphela and Serero: The killer combination 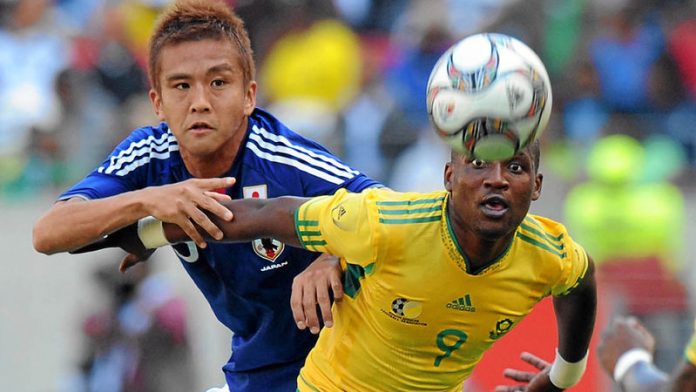 Injuries are the critical twists of fate in the build-up to an international tournament and, on balance, coach Gordon Igesund can count himself lucky so far. He may have been robbed of the services of Benni McCarthy, Eric Mathoho and Ayanda Patosi, but the timely availability of Katlego Mphela and Thulani Serero compensates for those three casualties. In tandem, the two returnees could form a new attacking axis sharp enough to slash a route into the quarterfinals and beyond.

There are no guarantees that either will start in the opener against Cape Verde in a fortnight. The duo have barely played together, and their sharpness and endurance in training will be scrutinised by Igesund this weekend in Cape Town. Expect them to come off the bench for match-fit rivals in Tuesday's friendly against Norway.

But their complementary qualities promise a destructive starting partnership. If "Killer" Mphela is a natural assassin, then Serero is a born capo – South Africa's keenest football brain in the post-Steven Pienaar era. The Ajax Amsterdam attacking midfielder has the vision, speed and unpredictability to rival the foremost number 10s in this tournament – André Ayew, Rainford Kalaba and Younes Belhanda.

And if Serero does get the nod, then Mphela is the striker best qualified to profit. To quote the fearsome Proteas bowler Vernon Philander, the stats don't lie. Mphela may not have a strike rate as world-beating as Philander's, but he has racked up his 23 international goals at a much faster rate (in just 47 appearances) than any of his more celebrated forebears from happier days – such as McCarthy (31 strikes in 80 games), Shaun Bartlett (29 in 74) and Phil Masinga (18 in 58).

The Serero X-factor
Mphela pulls his weight, in short. Bafana's overall goal-scoring woes stem from midfield: too few midfielders find the net with any regularity – yes, we're looking at you, Kagisho Dikgacoi – and too few clear opportunities are created against top-quality defences. That's why Igesund has gambled so boldly on Serero, a wildcard selection who has played no senior club football since returning from injury in December.

But the Serero X-factor may complicate the Bafana chalkboard. Should Igesund pick him at the expense of Bernard Parker, the incumbent shadow striker, or use him in wide midfield in favour of either the seasoned Siphiwe Tshabalala or Lerato Chabangu, an Igesund favourite who has done little wrong in recent internationals? Parker has excelled and matured for Kaizer Chiefs this season and, given Igesund's respect for experience, Shabba is also hard to leave out. And Igesund seems committed to deploying two defensive central midfielders – Dikgacoi plus either Dean Furman or Reneilwe Letsholonyane.

Whoever makes room for Serero, his inexperience is an acceptable risk given the solid layer of caps elsewhere in the line-up. This squad is one of the most seasoned in the draw – it is full of battle-scarred warriors in their late 20s. The following starting XI would table an average tally of 42 international caps per player: Itumeleng Khune (48 caps); Tsepo Masilela (44), Bongani Khumalo (32), Siyabonga Sangweni (23), Siboniso Gaxa (53); Tshabalala (70), Letsholonyane (32), Dikgacoi (47), Chabangu (18); Mphela (48), Parker (47).

That will not be the line-up against Cape Verde. Anele Ngcongca will get the nod ahead of Gaxa, and the richly promising Thabo Matlaba should push Masilela hard for the left-back assignment. Furman is also a contender to start ahead of Letsholonyane alongside Dikgacoi, though there are doubts about the Oldham holding midfielder's control at international level.

Furman's day job is in the third tier of the English game and, although he is a disciplined, ballsy player, his technical limitations start to show when the heat is on. It's possible that May Mahlangu is a better bet than either Yeye or Furman for the job.

Jali's form
And it's also possible that Andile Jali is a better central midfielder than all three. Millions of eyebrows were raised by the Orlando Pirates firebrand's absence from the final squad. In Igesund's defence, Jali's form has not been consistent or compelling enough to oblige a call-up but his combative spirit might have proved invaluable. The final squad appears to lack a forceful, explosive presence – one capable of single-handedly triggering a fightback when the side is trailing and heads have dropped. Jali is that kind of player.

Tuesday's friendly won't tell us too much about Bafana's potential in this tournament. Norway coach Egil Olsen has brought a young and inexperienced selection of Scandinavia-based players on their mid-winter league break. Only right-back Espen Ruud, keeper Rune Jarstein and striker Erik Huseklepp are regular starters, and Bafana should not be satisfied with anything but a victory.

On Saturday morning, the squad will be going to the cricket Test at Newlands, in the event that the Black Caps are still alive by that point. If so, perhaps a few molecules of the Proteas' world-beating mojo will seep into Bafana's heads by osmosis.

With Nations Cup ticket sales sluggish, and the shame of the Safa match-fixing scandal still lingering over South African football, it's hard to visualise any glory this month. But that could change quickly if the genuine talent in the Bafana ranks is freed from the shackles of self-doubt.

Igesund called his side a "dream team" when he announced his final 23, inviting a volley of easy wisecracks about his rich fantasy life. In these dark days for South African football, we need every dream we can muster.