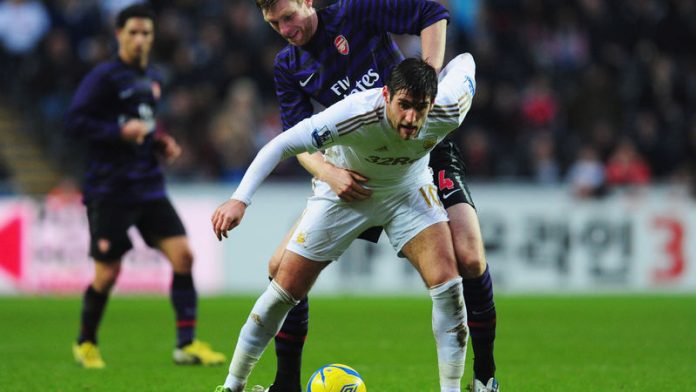 Arsenal had fought back from behind at the Liberty Stadium on Sunday to lead through a quick-fire pair of goals from Lukas Podolski and Kieran Gibbs in the last 10 minutes, only for Graham to pounce at the death to take a gripping tie to a replay.

Swansea had led through a 58th-minute effort by Michu, scorer of both goals in a 2-0 win at the Emirates Stadium in December, but Swansea appeared to be heading out until Graham found the roof of the net with three minutes to play.

Michu began on the bench for Swansea, perhaps with an eye on Wednesday's League Cup semi-final first leg against Chelsea, while Arsenal made three changes and deployed Olivier Giroud as a lone striker.

Arsenal threatened through Aaron Ramsey and Santi Cazorla, but it was Swansea who created the clearest openings in the first half.

Graham extended Arsenal goalkeeper Wojciech Szczesny with a crisp strike in the 13th minute, while former Arsenal trainee Kyle Bartley rattled the crossbar with a header nine minutes before half-time.

Giroud tested Swansea goalkeeper Michel Vorm twice early in the second period, before Michu rose from the dug-out to tip the tie in the hosts' favour.

The Spaniard had only been on the pitch for a minute and 13 seconds when he collected Nathan Dyer's knock-down, lobbed the ball over Per Mertesacker, and then beat Szczesny to claim his 15th goal of the campaign.

Podolski swivelled on a loose ball to level in the 81st minute and Gibbs then slammed in a sumptuous volley from Giroud's chipped pass to put Arsenal ahead two minutes later, but Graham had the final say.

One of the most evocative ties of the third round takes place later on Sunday, when Liverpool bid to avoid an upset at fifth-tier Mansfield Town.

Newcastle United were cast onto the FA Cup scrapheap by second-tier Brighton and Hove Albion on Saturday, while Manchester United needed an injury-time Robin van Persie equaliser to salvage a 2-2 draw at West Ham United. – AFP

Derby delight for the Red Devils kept them on Chelsea's coattails in the battle for a top-four finish, but it was also a good Sunday for the Blues as they thrashed Everton 4-0.
Read more
Advertising
Continue to the category
Politics