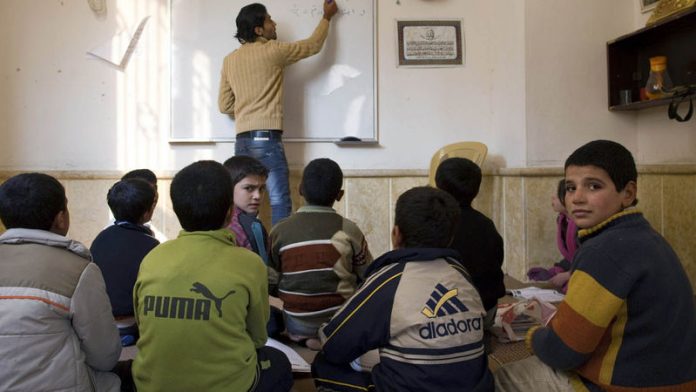 The Ottoman-era palace now serving as their school in the rebel-held part of Aleppo's historic centre may have a gracious interior court and high ceilings, but it's the walls – the solid stone walls – that are the reason the children are taking their classes there.

"This area isn't very safe. The frontline is just two streets from here. But this building is very high and its walls are fairly thick, which protects the children from the mortar rounds," says its principal, a theology studies graduate who goes by the name Abu Salam Mustafa.

The 29-year-old teacher opened his makeshift school in the abandoned palace after Syrian rebel fighters took over previous, official schools in the northern city as their barracks and headquarters, resulting in all becoming targets for government shelling.

Dozens of children study in the improvised classrooms set up around the building's courtyard as the chatter of light weapons and the boom of artillery shells and mortars echo from not far away.

Not afraid
"The children aren't afraid of the war, quite the contrary," Mustafa says. "When a jet or helicopter appears, they all run out to the terrace to wave at it. But we're afraid for them, because the old city is full of snipers."

Mustafa and his handful of unpaid teachers, all of them young and university-educated, see the classroom continuity they are providing Aleppo's youngsters as an essential haven in a world turned bloody and chaotic.

A couple of other similar schools operate in the city, some of them in mosques, which are also solidly built.

Their white boards and textbooks are more than tools to instill learning; they are therapeutic aids for pupils inevitably scarred by the violence.

"One of our aims is to try to help them get over what they've seen these last months. A number of them have lost people close to them … have seen people die. Many of them have psychological problems and start crying for no reason," Mustafa says.

Mortars recently killed three people in the school's district, prompting parents to pull their children out of three other less-safe makeshift schools in the area which had to then close.

On the frontline
"Parents are still afraid of sending their children to our school because we are on the frontline. But we have to resume our normal lives, not to let fear dominate our lives," Mustafa says.

He and his teachers are determined to keep instructing the pupils "so they don't spend their days in the streets".

One of the teachers, a 23-year-old former chemistry student called Abu Ahmad, evaluates the improvised school not by its ad-hoc curriculum but by the security it offers.

"It's a very safe place. On the ground floor we have a safe room in case of bombs," he says.

Classes are held for four hours every morning, except for the traditional day of rest on Friday.

Dreams of a 'normal life'
"It's my parents who tell me to come every day," says one of the students, Ahmad Saman (13). "They are afraid, but something could just as easily happen to me staying at home."

Mohammad Assun, a 16-year-old student, dreams of just one thing: "That all this nightmare stops and we go back to a normal life, where we're not afraid of a bomb destroying our home."

His ambition is to study hard to become an architect; to help build homes in his shattered land. – Sapa