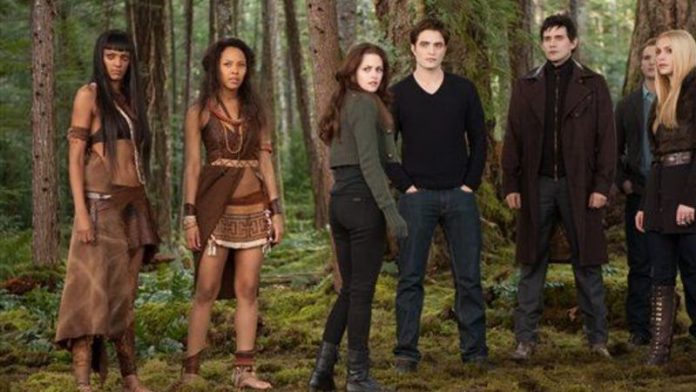 The Twilight finale had better reviews than the franchise's previous four movies, but you'd never know it from the Razzie nominations singling out Hollywood's worst of the year.

A spoof of the Academy Awards, the Razzies announcement came a little more than a day before Thursday's Oscar nominations. Winners for the 33rd annual Razzies will be announced February 23, the night before the Oscar show.

The final instalment in the supernatural romance involving vampires, werewolves and a moody schoolgirl, Breaking Dawn – Part 2 also had nominations for worst director for Bill Condon, plus worst sequel, screenplay and screen ensemble.

It picked up two nominations for worst screen couple – for Stewart and Pattinson and for Lautner and child co-star Mackenzie Foy. Stewart's worst-actress nomination came for two performances in 2012, her Bella Swan of Twilight and the title role in Snow White and the Huntsman.

Earlier Twilight movies have been regular nominees for the Razzies but have not come away with any key worst-of awards. But the finale seems to be the one Razzies voters have been waiting for, the way Oscar voters were waiting for the last Lord of the Rings film, the one that finally won the big prize.

"That's the analogy we're making, that this is the Razzies' flipside," said Razzies founder John Wilson. "This is our equivalent to The Lord of the Rings. It's our members' last chance to razz Twilight."

Here's how Razzies organisers described the Twilight finale in the nominations announcement: "The ultimate installment of the inexplicably successful series focuses on Shirtless Werewolf Jacob and his creepy relationship with the daughter of Sparkly Vampire Edward and Gloomy Goth Gal Bella. Together, the four face a final showdown that will determine the fate of Romantic-But-Boring Monsters everywhere."

Sandler – whose Jack and Jill made Razzies history last season by winning a record 10 awards, sweeping every category – remains a Razzies favourite this time. That's My Boy ran second with eight Razzie nominations, among them worst actor for Sandler and supporting actor for both Nick Swardson and Vanilla Ice.

Tyler Perry was nominated for both worst actor (Alex Cross and Good Deeds) and actress (Madea's Witness Protection, in which he reprised his cross-dressing title character).

Along with Sandler, Pattinson and Perry, worst-actor contenders are Nicolas Cage for Ghost Rider: Spirit of Vengeance and Seeking Justice; and Murphy for A Thousand Words.

Joining Stewart and Perry in the worst-actress lineup are Katherine Heigl for One for the Money; Milla Jovovich for Resident Evil: Retribution; and Barbra Streisand for The Guilt Trip. – Sapa-AP

From the engagements of musicians FKA Twigs and Kendrick Lamar to BB King getting hospitalised, we round up this weekend's entertainment news.
Read more
Friday

The film industry is aiming its lights on ever darker films for teenagers. The future doesn't look happy but luckily it often has strong female leads.
Read more
Friday

‘Twilight’: The S&M fantasy for teens

The "Twilight" novels have sold more than 100-million copies and are considered so significant that the Vatican has attacked them.
Read more
Videos

In this week's Weekend 101, the race for Mangaung becomes more interesting, the Spear is declassified and Twilight comes to town.
Read more
National

<b>Shaun de Waal</b> says one does not have to see the opening of <i>Water for Elephants</i> to predict the end.
Read more
Advertising
Continue to the category
Politics