Rightwingers on the rise in Israel 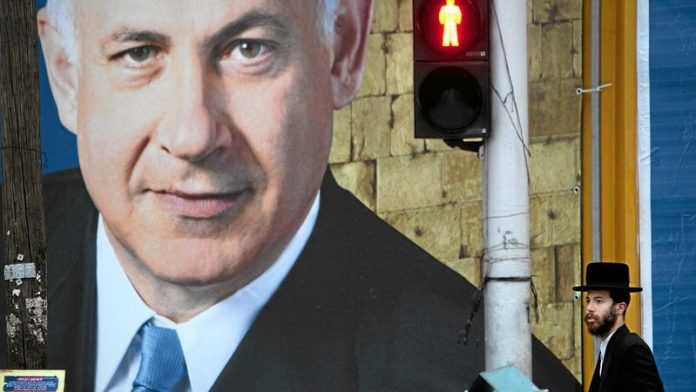 Israeli elections are due on January 22 and polls suggest that a government ranked as one of the most rightwing in Israel's history is set to be replaced by one even further to the right. Binyamin Netanyahu's Likud – now merged with the party headed by his ultra-nationalist former foreign minister, Avigdor Lieberman – is losing ground to the ultra-ultra-nationalist Jewish Home party. Even the more modest projections suggest Jewish Home will emerge as the third-largest party, one that Netanyahu will find very hard to exclude from his next coalition.

And what kind of outfit is Jewish Home? Take a look at its leader, Naftali Bennett, born of American parents and a champion of the West Bank settlers. He demands immediate annexation by Israel of 60% of the West Bank. In a 2010 TV debate he dismissed a Palestinian member of the Knesset in these terms: "When you were still climbing trees, we had a Jewish state here … We were here long before you."

Even if Bennett is kept out of the coalition, Netanyahu will still head a more rightist government. The Likud's few remaining moderates were purged in recent internal elections, replaced by hardliners such as Moshe Feiglin. Here is what he told a reporter from the New Yorker: "You can't teach a monkey to speak and you can't teach an Arab to be democratic. You're dealing with a culture of thieves and robbers … The Arab destroys everything he touches."

Yet, far from being ostracised, such overt racists are set to gain new seats at Israel's ruling table.

The conventional explanation for recent rightwing electoral success has been a loss of faith by the Israeli public in the peace platform that once defined the left. The failure of the Camp David talks of 2000 and the response to the 2005 Israeli withdrawal from Gaza – a steady stream of Hamas rockets aimed at Israeli towns – discredited the idea of land for peace.

The lunatic fringe
"We give them land; they give us war" was the bitter Israeli joke and the public resolved long ago that it will not be fooled again.

But that explanation does not fully account for the current lurch towards what was once deemed the lunatic fringe. Instead, the blame can be shared evenly between the Israeli centre-left, Palestinian leaders and the international community.

Ever since Yitzhak Rabin was murdered nearly 20 years ago, Israel's centre-left has failed to advance a vision of a modern, democratic country – one that would properly acknowledge and integrate those Palestinians living within the pre-1967 borders and no longer run the lives of those Palestinians living outside them, in the occupied territories. The centre-left created a vacuum and the nationalist right filled it.

As for the Palestinians, the Middle East analyst Daniel Levy suggests they have failed to play an ANC-style role, one that would "challenge the mainstream Israeli discourse".

President Mahmoud Abbas makes threats of diminishing credibility – to dismantle the Palestinian Authority, for example – and Hamas's militancy succeeds only in closing Israeli ranks (even if its military wing has just taken the intriguing step of tweeting in Hebrew).

Neither approach makes the Israeli public pause and think again. Meanwhile, the international community, administering only the rarest slap on the wrist, has made the status quo cost-free. Israeli voters can put Bennett or Feiglin into government without fearing any consequence.

Overt entrenchment
So we ought to brace ourselves for an ultra-right government, one divided between those pushing for immediate annexation and those who seek a less overt entrenchment of the status quo. The already moribund two-state solution will be all but buried.

There are two shafts of light to be spotted in this gloom. First, Levy welcomes what he believes will be a clarifying kind of polarisation: "The layers of camouflage will now be removed." The right will be exposed, the moderate fig leaves of the past stripped away. Meanwhile, the centre-left will include a greater number of robust liberals and genuine democrats, the ex-Likudniks of the now-defunct Kadima party having mostly departed. Instead of clustering around an artificial middle ground, Israeli politics will present a clear left-right choice.

Second is the impact of all this on the Jewish diaspora, especially in the United States. The American Jewish attachment to Israel is profound, but US Jews also tend to be liberal with a strong sense of social justice. They will find Feiglin and Bennett hard to stomach. Feiglin's Israel is not the Israel their parents taught them to love.

US-Jewish support for Israel has chiefly been for the ideal of a democratic, peace-seeking Israel. If Israelis vote for those who display contempt for both peace and democracy, for those set on the path of Israeli self-destruction, they will one day find that essential bedrock of support cracking beneath their feet. – © Guardian News & Media 2013