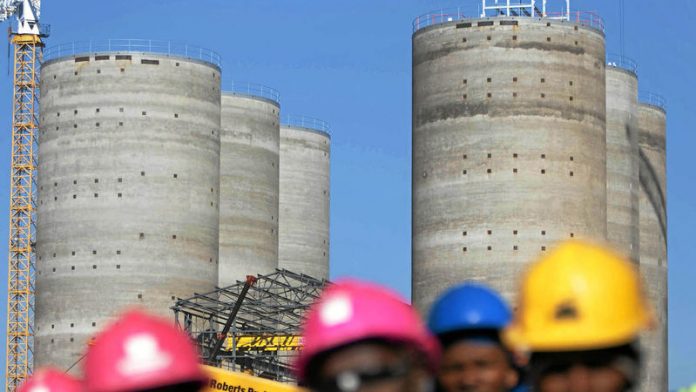 Farmers have complained that sand being used  to build Eskom's mega-power station Medupi is still being mined illegally, which is destroying the main local water source.

Two years ago farmers in Lephalale complained that sand mining was destroying the Mokolo River, which flows into the Limpopo River. But the government said the power station was a national priority and different rules applied.

Medupi, due to be commissioned this year, will be the largest dry-cooled coal power station in the world at completion. It is a crucial part of the major build programme launched by Eskom after power shortages saw rolling blackouts in 2008.

An interdepartmental task team was created to look into the sand mining and locals went to court to stop it. But their urgent application was not granted, although the department of environmental affairs's investigative unit, the Green Scorpions, is issuing sand miners in the area with compliance orders.

At stake is the health of a river that has provided irrigation in this dry region for decades. "Medupi is only here for 50 years but this river has to look after people for hundreds of years. They are taking the sand and our water from us," said Susan Goosen, a local game farmer.

The river is the only local source of water – the underground water is too deep and its quality is not good enough for crops. In summer, the river flows and provides farmers with water. The watercourse also acts as a sponge, which releases water during the winter when the rainfall is low.

Goosen said she had water rights for 19 hectares but, at best, could irrigate five. "We have nobody to turn to now. The local authorities tell us the mining is in the national interest, so they let it happen. And the only department that has helped us is environmental but they cannot beat the other departments involved."

Compliance strategy
The farmers cannot afford another court case to test the merits of their application.

Albi Modise, the spokesperson for the environmental affairs department, said they visited the area in June and established a compliance strategy based on what they found.

"In order to legally extract sand in this river, an operator requires a mining authorisation, a water use licence and an environmental authorisation. None of the parties extracting sand in the river are in possession of all the necessary authorisations."

He said the Scorpions were taking action against the largest local operator first, which responded to the notice issued to it, and the department was deciding whether it should issue a final compliance notice.

Modise acknowledged that the man many local people said was the biggest miner, Leon Fourie, is part of the investigations but he would not elaborate on it.

Francois van den Berg, chairperson of the local water users' association, said farmers could no longer grow winter crops such as pumpkins and tomatoes, which were an important source of income and staples for those in the area. "But if there is no water, then there is no water," he said.

Water use authorisation
When asked in Parliament about the mining in 2010, the then minister of environmental affairs, Buyelwa Sonjica, said mining had to happen because Medupi was "a national strategic project for socioeconomic development".

She said Fourie had not been issued with a water licence, although he had received a general water use authorisation.

An authorisation is not as specific as a licence, but it does come with stringent rules on how a river must be treated. Mining cannot impede or divert the flow of water, or alter the bed, banks, course or its characteristics of any watercourse.

Other farmers say mining has altered the natural flow of the river, and that the water is eroding the river­banks. The holes created by mining are also becoming mini-dams, which hold back water.

Paul Fairall, an environmental consultant who was contacted by locals to help them, said: "This  Fourie is the real bad boy of Lephalale."

The damage already done to the river could only be reversed at huge cost, Fairall said. "He has done so much damage that you would have to do significant interventions to get that river back to normal."

Fourie said last week that he would comment but the Mail & Guardian has not been able to reach him since then.