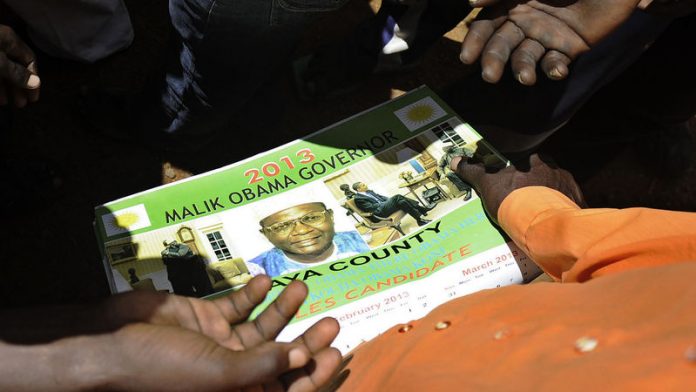 Malik Obama (54) who shares a father with the US president, said that the achievements of his more famous brother have "inspired and challenged" him to get into politics.

"When I look at the success that my brother has had in America, I feel I would have let down my people if I do not follow in his footsteps," Obama said in an interview late on Wednesday in his ancestral home of Kogelo in western Kenya.

Standing well over six feet and dressed in faded jeans and a flowered beach shirt, Obama, who describes himself as an economist and a financial analyst, but who dodges questions about his employers or clients, said he is well-equipped to deal with the "endless cycle of poverty and unemployment that bedevils my people".

"I can confidently say that I am the best placed candidate … by virtue of my second name alone, I have the connections to bring development to Siaya," he said, referring to his home county some 100km from the lakeside city of Kisumu.

Obama will need his name if he is to stand any chance against the competition, which includes Oburu Odinga, the younger brother of Kenyan Prime Minister Raila Odinga, the de facto head of the Luo community, of which Obama is also part.

He said his links to Washington will help him clinch the seat. "Why would my people settle for a local connection when they have a direct line to the White House," he said as he weaved his way through a group of supporters, with the slogan: "Obama here, Obama there", looming on posters.

Social change
"You do not have food. You do not have good schools. Life is tough for you guys," he tells a group of young men before launching into a detailed account of his colourful and successful educational background and the positions he has held in prestigious US companies.

"I am the best placed candidate to deal with the issues affecting the people," he added. Government statistics show that in Siaya, the county he wants to represent, poverty is a big problem, with others including the prevalence of HIV and malaria.

For potential voters one of the biggest drawbacks with Obama is that he does not do handouts. In Kenya most voters cast their ballots along ethnic lines and rank and file supporters expect to collect small sums of money, generally between two and six dollars, from their candidate in return for showing up at a rally.

"Of what use are the handouts … I'd rather do something more long-lasting like put up bridges or support orphans," he retorted.

In a whole day of campaigning the only thing he hands out are calendars emblazoned with a picture of him and his brother Barack in the Oval Office. As a result, his entourage is limited to two people.

Even his supporters question how serious he is. "Malik is a good man at heart but … he is the kind of man whom we can elect and he spends his entire term with his brother in America," 62-year-old Michael Odongo said.

'My dream'
"He is not addressing our immediate problem … we have nothing to eat now … his talk of the future will not feed me," Odongo said.

The March elections are the first since the bloody 2007-08 polls that left at least 1 100 killed and 600 000 more displaced after what began as protests over the election results degenerated into vicious killings pitting supporters of Odinga against those of the outgoing president Mwai Kibaki.

"This is my moment. I will stand up and make my brother proud … through me our father's dreams will be realised and I hope that wherever he is, he is looking down on us proudly," Obama said.

Among his own dreams he lists vying for the presidency at the next elections and bringing burger chain McDonalds to Siaya county, the rural backwater he wants to govern.

"I would one day like to see megastores such as McDonald open a branch in Siaya so that the residents can enjoy some of the fine things in life," he said. – Sapa-AFP