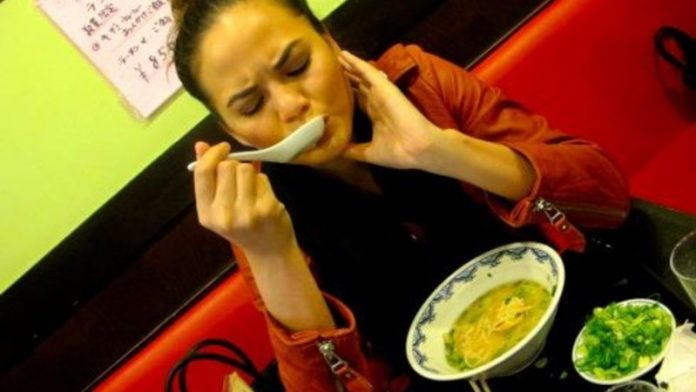 Christine Teigen is a Sports Illustrated swimsuit model who loves to eat, can't swim and hates beach sand. She also happens to be John Legend's fiancé.

But she just wants to be known as Chrissy. That's not too much to ask, right?

What I find most remarkable about Chrissy is her cheeky food blog, So Delushious, where she shares her favourite recipes (and photos of her dogs Puddy and Pippa)

I would love … let's see. I hate the word foodie, I don't want anyone to ever say foodie Chrissy Teigen. I would love to have respect in the food industry. Not from chefs, I am sure. In this world now, there are wonderful chefs and then there are celebrity chefs. I am sure that it is hard for the real chefs out there to see that a lot of people just want to be on television cooking. I don't want to be like that, it's just two different worlds, but I know that's where I am going. I'll never be like them and I respect them so much for that.

Your food blog, it's a year old now right?
Yeah. When I first started cooking, I would try to do things off the cover of Bon Appétit or something because I really wanted to push myself to learn, I don't have the technical skills. I love to cook and I have the heart but I have nothing technical.

What are some of your favourite recipes?
I love the ones where they look like they took a lot of effort but are not difficult. I like it when it looks beautiful. It's like tricking people. My most popular recipes are always really simple. For example, I'll make a lamb leg. It could be a really easy recipe to follow, but when people see it is a lamb leg they think it's too hard. So I'll get just few clicks and a few comments. But when I make something that I feel dumb for explaining, it gets the most attention – such as chicken or catfish fillet. But it is all about people trying something new too. I realised that people want to cook things that make them look like a great chef, things that are simple – the no-fails, which is what I specialise in.

Do you spend a lot of time on other blogs?
Oh yes, I don't take recipes but if I go to a blog I am there for hours. I prefer reading cookbooks. When I do I am inspired again.

Inspires you to create your own tastes?
I make changes to recipes because I like things spicy. If it says two cloves of garlic, I add six. So I change it in that sense for my taste. I don't know how to make-up my own recipe. I don't pretend to be a chef, I am terrible at maths. I'm not good at measuring. When you post recipes, people want to know the exact amounts because they don't trust themselves enough. But in reality you can just add whatever you want – if like the taste then it is right. There is no right or wrong answer.

Have you ever thought of writing a cookbook?
Definitely. I think of that more than I think of modelling. I know for a fact that I'll have a cookbook when I learn more. I would love to be somewhere between a Rachel Ray and Martha Stewart. I want to be the imperfect Martha Steward. I saw her at an event and I ran up to her (and I never run up to anybody). After I ran up I didn't know what to say. (laughs)

You love bacon. You talk about it and blog about it all the time.
Oh, I love bacon! I actually can go the rest of my life without a piece of cake or pie. I love salt. Bacon fulfils everything in me. I love bacon and cheese, before bed as a snack. I am going to have a heart attack one day for sure.

So no sweets?
I am not a sweets person. I like to make it though. I am at that age where everyone is having babies, so when a friend has a baby shower, I love baking for it. Making cute little sweets, the individual bag things like cake batter popcorn, little cupcakes. I will never eat it though.

I am very emotional when it comes to food. My dad is American so I grew up with him making meat and potatoes. My mom is Thai so she'll make her Thai food but I never really ate it. My dad and I would gang up on her and say: "Ew, you're using fish sauce". Now I would never say that.

I am very lucky. I love aeroplanes. I eat the entire time and put the sticker up that says wake me for the meal. I remember what aeroplane food used to be – a little tray, with a little compartment, but now it is different. I know what to order. Oily fish on an aerorplane is so tender and flaky. Beef is a good choice; pasta is always too mushy. I know all the little tricks. I am not a big fish person but I love to order fish on an plane.

You went to cooking school in Thailand with your mom. How was the experience?
It was so nice. I surprised my mom. I was in Australia with friends and she didn't know that I was coming to Thailand. I booked a week long cooking course.

Because she is Thai, she thought she would know it all but we went there and it was so cute. It was more than a cooking class, it was fun and light. You learn about the different flavours of Thai food – stuff you can't learn anywhere else. Everything else you can look up online. If I wanted to make cashew chicken I can find the recipe easily, I didn't have to go to Thailand to learn that. But the kind of information you learn there is priceless, about flavours they love and the vegetables they grow and when they grow it. It was a real cultural experience. I loved it. But I ate too much food.

I want to go [on a course] in New York but I don't want to learn how to be a chef on the line. It's too much pressure. It's just that I want to learn more. I have zero technique right now. It's embarrassing. It is my biggest weakness. I YouTube a lot of it, so I learned how to do my eye makeup on YouTube and also how to cut onions.

For more go to the So Delushious blog.