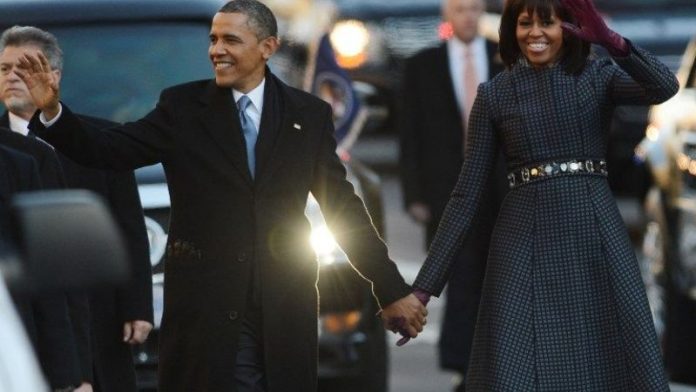 US First Lady Michelle Obama cemented her reputation as an international style trend-setter with her choice of a Jason Wu red sleeveless ball gown in the evening, and a striking business-style blue navy coat and dress for the ceremonial daytime events.

It was a huge win for US designer Wu making one of his ball gowns her choice for a second inauguration.

The first lady appeared for her first dance of the night with the US president at the Commander-in-Chief's Ball for US service members in a ruby-colored chiffon and full-length velvet gown custom made by the New York-based designer. 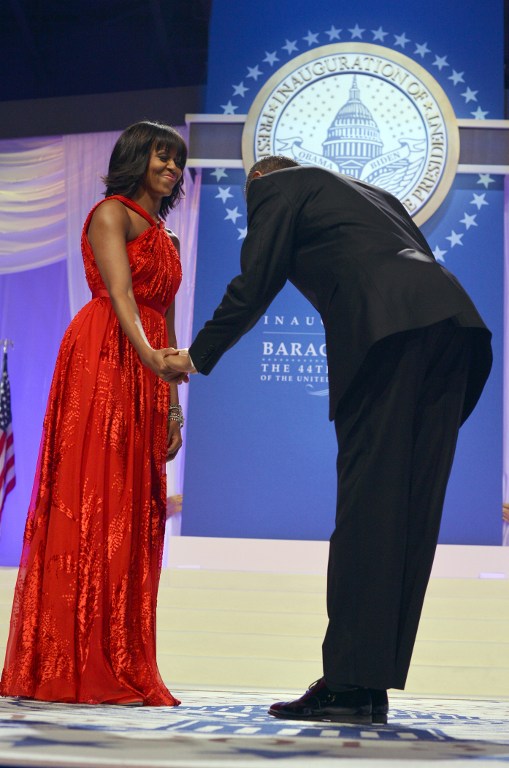 Her shoes were from the London-based Malaysian-Chinese designer Jimmy Choo, and she wore a diamond-embellished ring handmade by jeweller Kimberly McDonald of New York.

Obama helped make Wu a household name by choosing a white chiffon gown he designed for the balls celebrating her husband's first inauguration in 2009. Wu, now 30, has since had significant commercial success, but his creations in the two inaugurations has won him a place in US fashion history.

Style icon
Dressing the first lady, a Harvard-trained lawyer known for her style, can be a huge boost for a fashion designer or retail chain. Praised for wearing high-end designers as well as pieces from mass-market stores, the first lady has won over fashion critics in her four years in the White House.

"Icon's a big word and it sometimes gets over used, but I think if we're going to use it, we can use it now," said Steven Kolb, chief executive of the Council of Fashion Designers of America, adding, "What makes her a real icon is the work that she does and the woman that she is."

Dresses, sweaters, shoes and belts she has worn have sold out at retailers from designer showrooms to mass market chains including Gap, J.Crew and Target, for which Wu has designed low-priced fashions.

Earlier on Monday, the first lady wore a navy coat and dress by designer Thom Browne, inspired by the fabric of a man's silk tie.

Her belt and gloves were from J.Crew, a chain that is a fixture in US shopping malls; the necklace and earrings were designed by Cathy Waterman. The suede boots were by Reed Krakoff, as was the short blue cardigan she wore to a celebratory lunch in the Capitol.

Big-ticket industry
Best known for men's clothing, Browne boasts a string of design awards, most recently, a prestigious National Design Award for fashion from the Cooper-Hewitt National Design Museum in New York, which is part of the Smithsonian Institution.

"She likes well-tailored clothes, so the inspiration was doing something that looked tailored and structured and fitted through the body and somewhat A-line for the skirt and the dress," Browne told the Los Angeles Times.

Style mavens credit the 49-year-old first lady with changing the way American women put together their outfits, and, by patronising US designers, bolstering a multibillion-dollar industry.

A 2010 study from New York University's Stern School of Business found that a single appearance by the first lady can generate $14-million in value for a company. Famed for her toned arms, Obama set a trend for sleeveless tops.

Her cardigans and belted dresses have prompted many working women to switch from blazers and suits in the workplace. "Michelle looks good however, wherever, whatever she does. Michelle looks good in her sleeping gown," said Sharon Johnson, a therapist who came from Baltimore to watch the inauguration, and joked that she is still looking for the green leather gloves Obama wore on Inauguration Day four years ago.

"Her beauty is so far inside, and shines so far outside," Johnson said. When Michelle Obama held the Bible for her husband during his official swearing-in on Sunday, she wore a dark blue dress by Reed Krakoff, the creative director for the Coach leather goods company, who has become a fashion designer.

Hot new hair-do
On Sunday night, she wore a sleeveless black sequined dress by Michael Kors to an inaugural reception for supporters. At that reception, Barack Obama weighed in on what he termed the most "significant" event of the inaugural weekend, his wife's hotly discussed new hairstyle. "I love her bangs," Obama said. "She looks good. She always looks good."

Interest in Michelle Obama's clothing has extended to the outfits worn by her two daughters. On Monday, the White House said Malia (14) was wearing a J.Crew ensemble and Sasha  (11) wore a Kate Spade coat and dress. Obama is a far bigger influence on US fashion than most of her predecessors. 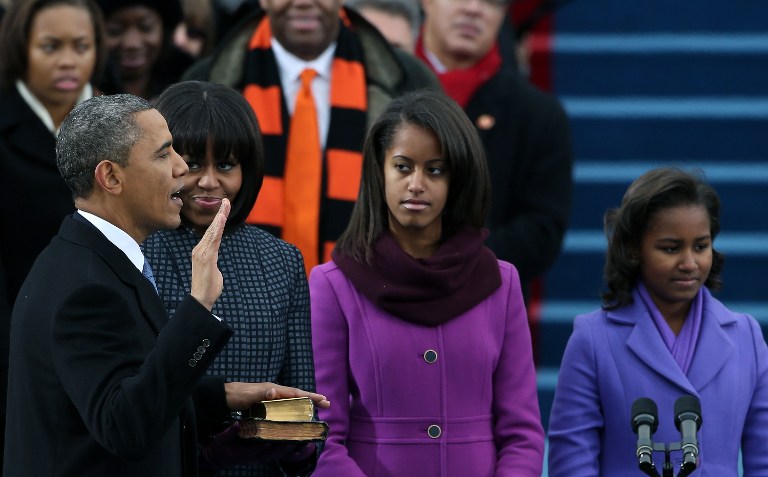 Laura Bush favored suits by Oscar de la Renta and Hillary Clinton, the US secretary of state, is best known for wearing a range of brightly coloured pants suits.

Even stylish Jackie Kennedy wore mostly European designers. Obama's fashion choices have not always been applauded. Some Americans were angry when she wore a red gown from a British label – Alexander McQueen – to a 2011 state dinner for China's president.

Kolb dismissed such concerns, noting that fashion is a global business and that US designers are thrilled when, for example, Kate Middleton, the wife of Britain's Prince of Wales, wears their clothing. "At the end of the day, we get up in the morning and we look in our closet and we have to feel good about what we put on," he said.

At the end of the inaugural festivities, Michelle Obama's outfits and accompanying accessories will go to the National Archives. – Reuters