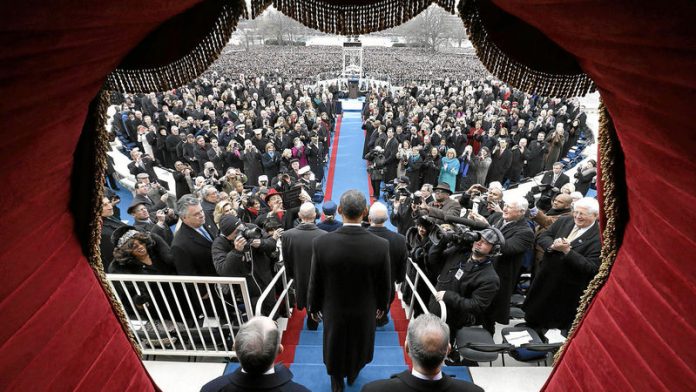 Republicans piled criticism on Barack Obama this week for what they described as an ideological inauguration speech and accused him of failing to offer anything in the way of compromise.

Obama and his vice-president Joe Biden attended a service at the Washington National Cathedral on January 22, marking the traditional end to four days of inaugural events.

The Reverend Adam Hamilton called for the parties to work together. "We're in need of a new common national vision – not one that is solely Democratic or solely Republican," he said.

But before Obama had even left the church, the hard reality of Washington politics began to kick in.

Republican Congressman Pete King said Obama could at least have made an effort to reach out to Republicans. "I thought he could have found some way to be more constructive," King told CNN, adding: "You can still make a case but do it in a more magnanimous way."

Senator John McCain, Obama's presidential opponent in 2008, rounded on Obama, saying it was the eighth inauguration speech he had heard and the first in which a president had failed to reach out his hand to the opposition party.

Criticising Obama
Obama devoted much of his first inaugural speech in 2009 to offering to work with the Republicans but spent most of the intervening years in bitter, debilitating fights with them that have frequently left Washington paralysed. Obama, frustrated by that and emboldened by his election victory, used his inaugural speech to underline his new combative approach, one in which he outlined the progressive agenda he hoped to push through in spite of Republican opposition. Conservative commentators joined Republican members of Congress in criticising Obama.

Stephen Hayes at the Weekly Standard accused him of seeking "to move the country even further left". His colleague Paul Kengor echoed that, saying: "In the hands of a conservative like Ronald Reagan, this would be just fine, a return to our founding principles. Yet, in the hands of a radical-left 'progressive' like Barack Obama, these are not the soothing words they appear to be on the surface."

The Republicans have given Obama an ultimatum: to make deep spending cuts or they would refuse to vote through the raising of the debt limit, which could mean departments closing down and no cheques for welfare recipients. Obama, facing them down, told them to go ahead: let the federal government close down and take the consequences.

The White House said that, although it had some concerns about the debt ceiling Bill, if the House and Senate passed it, Obama would sign it. Obama's press secretary, Jay Carney, described the Bill – which would extend the debt limit for three more months – as a "very significant development" in scaling down the sense of conflict and the potential for events to spin out of control. – © Guardian News & Media 2013

US democracy is stronger than it looks