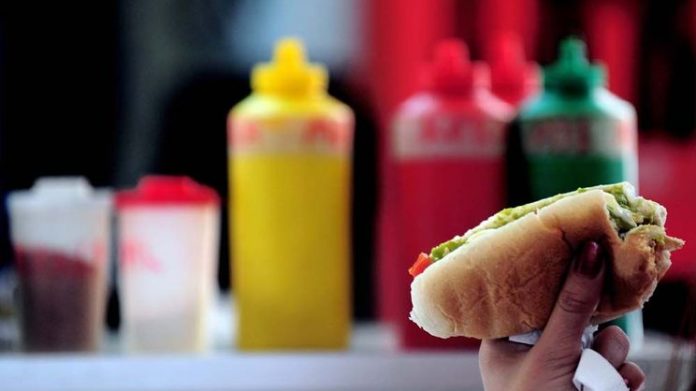 A diet of fast food and takeaways may be behind the steady surge in children's asthma and allergies affecting the United Kingdom and other developed countries, according to a study. An international collaboration of scientists has found that young teenagers in particular are nearly 40% more likely to have severe asthma if they eat burgers and other types of fast food more than three times a week. For children aged six to seven the risk increased by 27%. Children who eat fast food were also more likely to get severe eczema and rhinitis – a condition in which the nose blocks or runs and the eyes are itchy and water.

The scientists, from New Zealand, Spain, Australia and Germany as well as Nottingham in the UK, say their study could have "major public health significance owing to the rising consumption of fast foods globally" if the link they have found turns out not to be coincidence but causal.

The good news was that eating fruit appeared to protect young people from asthma and allergies. Eating three or more portions a week reduced the severity of the symptoms by 11% among teenagers and 14% among younger children.

The research, published in the journal Thorax, part of the BMJ group, came out of a large collaborative project called the International Study of Asthma and Allergies in Childhood (Isaac), which involves nearly two million children in more than 100 countries, making it the biggest of its kind.v The fast-food study involved a relatively small proportion of the children taking part in Isaac, from two age groups: 319 000 13- to 14-year-olds from 51 countries and 181 000 six- to seven-year-olds from 31 countries.

The children and their parents were sent questionnaires about their eating habits over the previous 12 months. They were asked how often they had eaten specific foods, including meat, fish, fruit and vegetables, pulses, cereals, bread and pasta, rice, butter, margarine, nuts, potatoes, milk, eggs and fast food/burgers. They were also asked whether and how often they suffered from specific asthma and allergy symptoms – and if so, how severe they were.

The fast-food link
Fast food – the authors specifically mentioned burgers only because it was the reference to fast food that most people would understand – was the only food type associated with asthma and allergies across all age ranges and countries. The authors said that "such consistency adds some weight to the possible causality of the relationship". But they said more research would be needed to discover whether fast food is definitely a problem.

The fast-food link was stronger among teenagers than among the young children, which the authors suggest may be because adolescents have more independence, money and control over what they eat.

The paper says a link between fast food and asthma and allergies is biologically plausible. It could be "related to higher saturated fatty acids, trans fatty acids, sodium, carbohydrates and sugar levels of fast food and possibly preservatives". Fast foods have high levels of industrially hydrogenated vegetable fats such as margarine, which can be a source of trans fatty acids In the teenagers, eating butter, margarine and pasta was also associated with asthma symptoms.

Studies that involve asking people about their diet can be problematic, because people either forget or tailor the truth. Professor Hywel Williams, from the centre of evidence-based dermatology at Nottingham University, said recall over the 12 months of the study was more likely to be inaccurate than biased and this would tend to dilute any association between fast food and asthma, rather than the reverse.

Risk
"Now if there was a widespread belief already out there that fast foods are 'bad' for allergies, then you could say the data was simply reflecting such prior prejudices/beliefs. But we are not aware of any such widespread prior belief. People often believe fast foods are associated with things like acne, obesity and hyperactivity, but not allergies, and severe allergies at that. And even if one country had such a belief, how could you explain such consistency across so many countries and cultures and socioeconomic groups?"

The study did not differentiate between types of fast food. "Our question simply asked: 'In the past 12 months, how often, on average, did you (did your child) eat or drink the following: meat; seafood; fruit; vegetables (green and root); pulses (peas, beans, lentils); cereal; pasta (including bread); rice; butter; margarine; nuts; potatoes; milk; eggs and fast food/burgers?'," he said. "So we could analyse each of these categories, but not split them down any further.

"And before we put the boot into burgers specifically, it does not mean they are always 'fast' as some of us (including me) make very nutritious 'slow' burgers at home – but it seemed like a well-understood anchor for fast foods since burgers are one of the commonest types of fast food sold around the world."

Malayka Rahman, from Asthma UK, said: "This research adds to previous studies that suggest a person's diet can contribute to their risk of developing asthma, and indicates the benefit of further research to determine the effects that particular food groups can have on the chances of developing asthma or the impact it may have on severity. Evidence suggests that the vitamins and antioxidants found in fresh fruit and vegetables have a beneficial effect on asthma." – © Guardian News & Media 2013

Slice of life: Boerewors — and condoms too