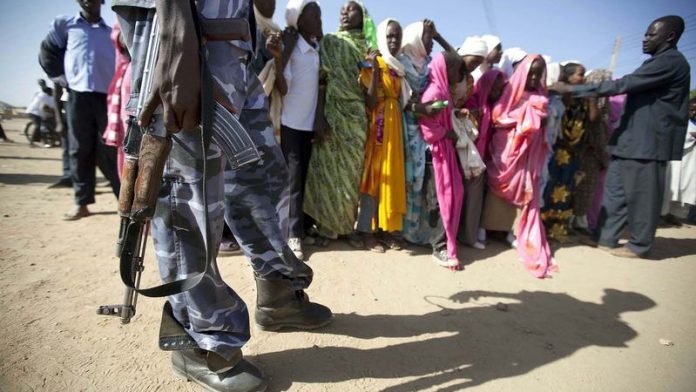 Africa may be "rising" on the back of strong economic growth but, away from the bullish headlines and investor excitement, many people still live under repressive regimes where their basic rights are violated and their lives at risk for speaking out.

Restriction of assembly and expression, detention of journalists, partisan and heavy-handed security forces, discrimination on grounds of sex, sexuality and religion, and poverty prolonged by corrupt institutions are some of the problems flagged in the 2013 Human Rights Watch World Report.

Launched on Thursday in Johannesburg and London, the 680-page report profiles 90 countries, including 18 sub-Saharan Africa, and pulls together research from teams around the world who investigate and follow up on reports of human rights' violations.

From around the continent, there are bleak accounts of either increasingly repressive regimes deliberately targeting journalists and activists, or weak government structures that are unable to protect their citizens' rights and maintain the rule of law.

Besides conflict zones such as the Democratic Republic of Congo, Mali and Somalia, there are accounts of thousands of people a year fleeing forced labour and prolonged military service in Eritrea, which has held no election since its independence in 1993; activists imprisoned in oil-rich but poverty-stricken Equatorial Guinea; and the ongoing political problems and rights abuses in Zimbabwe.

The report also details troubles in Kenya, where slow police service reform is hampering its ability to control political violence in the run-up to the election; state intimidation of opposition and civil society groups in Rwanda; the arbitrary application of anti-terror laws and forced rural displacements in Ethiopia; and an increasingly violent campaign against critical voices in Angola.

Escalating border conflicts
Catalogued too are the escalating border conflicts in South Sudan and reports of abuse by security forces; the violent suppression of student-led protests in Sudan, whose president remains subject to a warrant issued by the International Criminal Court for alleged crimes against humanity in Darfur; and in Uganda the limits to freedom of expression, assembly and association and the state-led campaign against homosexuals. South Africa is also analysed, with questions asked about the Marikana tragedy and its causes, and how the Traditional Courts Bill and Protection of State Information Bill can be reconciled with the country's Constitution.

The rather grim list jars with the Afro-optimism narrative currently favoured by the international media, who had come under fire for only reporting bad news about the continent and are now trying to find brighter angles to match its economic growth.

Tiseke Kasambala, Africa advocacy director at Human Rights Watch, said: "There have been gains on the economic front in Africa, we see a growing middle class, more spending power, etc. But I think we must maintain perspective. These economic gains will always be precarious as long as there is no respect for human rights.

"You have countries like Rwanda and Ethiopia, which are touted for their great economic and development gains but, on the ground, they are still denying basic rights to their people and, when people try to report this domestically, they face repression."

Citing the situation in Mali, Kasa­mbala said it was important that problems were not airbrushed to fit with the new optimism about Africa. "People are talking about Mali as having been one of Africa's more stable democracies but, in fact, it was a cosmetic democracy with weak institutions. These issues have led to the current problems there now. This is not something that has erupted overnight as some people seem to think."

More responsibility
Corruption, and its impact on governance and institutional capacity, is a recurring theme in many of the report's African country chapters.

Kasambala said corruption and human rights were "intrinsically linked" and that the failure to combat graft in governments affected the economic, cultural and social rights of citizens. "You can't really separate the two. Look at Kenya, where we have seen failures of state institutions to properly address rights issues on the ground, or Nigeria, where corruption has hampered the delivery of education, something we have seen here in South Africa too."

But, she added, it was not all bad news and there were encouraging signs about African governments taking more responsibility for regional stability and rights issues, which should be applauded.

John Endres, chief executive of Good Governance Africa, a Johannesburg-based research and advocacy organisation, welcomed the report, which he said was an important reminder of Africa's progress but also of its challenges.

"Organisations like Human Rights Watch and Amnesty International shine their spotlight in places where the light doesn't often reach. By doing this, they are increasing transparency and highlighting problems. They make it harder to hide mischief and help those issues to be addressed," he said.

Read the full report at hrw.org

The findings have wide relevance, from learning more about African history and migration to specific variants of people’s health
Read more
Friday

Extract from ‘The Journey: New Positions in African Photography’ — an introduction

The conflict in Ethiopia could spill over into the entire Horn of Africa region. AU and regional leaders need to step up their efforts to de-escalate the situation
Read more
Opinion

The pandemic has reminded us of interconnectedness and that we need to see the world from various perspectives, especially in case studies
Read more
Africa

A respected and robust United States — with all of our flaws, mistakes and missteps — can be good for the defence of democracy, not least in Africa
Read more
Advertising