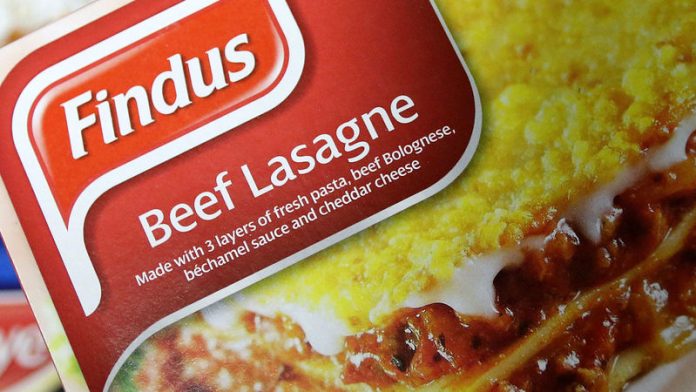 Food minister Owen Paterson rounded up industry bodies and retailers in an attempt to tackle what he feared was an "international criminal conspiracy" to mislead the public by passing off cheaper horse meat as beef.

Frozen food company Findus and supermarket chains Tesco and Aldi have all been forced to recall products labelled as beef which, tests showed, contained up to 100% horse meat.

"We believe that the two particular cases of the frozen burgers from Tesco and the lasagne from Findus are linked to suppliers in Ireland and France respectively," said Paterson.

Retailers and meat suppliers were also to attend the meeting on Saturday. The FSA has ordered all food retailers to test their processed beef products.

Scotland Yard said police had met with FSA representatives but that no official criminal investigation had been launched so far.

Prime Minister David Cameron said the issue was not about food safety, but rather about accurate food labelling, adding that it would be hard to restore confidence in the food industry.

"People will be very angry to find out they have been eating horse when they thought they were eating beef," he said.

International criminal conspiracy
Swedish food giant Findus withdrew various frozen meals from France and Sweden on Friday, a day after withdrawing frozen beef lasagne from sale in Britain that was found to contain up to 100% equine flesh.

The British supermarket chain Aldi voiced anger on Friday after finding that two of its own brand frozen ready meal ranges — beef lasagne and spaghetti bolognese — contained between 30% and 100% horse meat.

The meals were all produced in Luxembourg for French supplier Comigel, which said the horse meat used originally came from a Romanian abattoir via a meat-processing firm called Spanghero in south-west France.

But officials at Spanghero's headquarters in Castelnaudary refused to say where the meat had come from and whether it had passed through intermediaries, but indicated a statement would be made later on Saturday.

"We have a real problem," Paterson told Sky News television.

"There are very significant amounts of horse meat in products marked as processed beef. That is totally unacceptable.

"People must go to the shops today knowing and having confidence that if it's marked beef, it is beef.

"It may be incompetence; I fear it's actually probably an international criminal conspiracy and I'm completely determined to get to the bottom of it."

Paterson said he wanted to know how the industry intended to analyse all processed beef products on sale in Britain by the end of next week.

"Something must have gone extraordinarily wrong or someone was acting in a criminal manner," he said.

He stressed that there was no evidence that the products were unsafe for human consumption but added: "This is an issue of mis-labelling and effectively a conspiracy to mislead the public."

"We are aware of the very strong feelings this has given rise to, particularly in Britain," he told Agence France-Presse (AFP).

According to Lehagre, his company thought Spanghero were supplying them with beef from French cattle.

However, "they've told us the meat came from a Romanian producer who used abattoirs which slaughtered both cattle and horses and processed beef and horse meat".

The meals were then produced in Luxembourg by a supplier called Tavola.

Luxembourg's director of veterinary services Felix Wildschutz told AFP that the meat imported from France had been "fraudulently labelled" beef.

Spanghero was established in the 1970s by two former France rugby players, Claude and Laurent Spanghero. They were bought out in 2009 by Lur Berri, a Basque agricultural cooperative.

In Romania, Sorin Minea, president of Romalimenta, the country's food industry federation, said: "Horse meat is cheaper than beef. The French importer has doubtless sought to buy cheaper meat. But given the specific colour and texture of horsemeat, it is impossible that they did not realise it wasn't beef.

"It remains to be seen if the abattoir or the importer has falsified the labelling," he stressed.

Taboo
On Thursday, the FSA announced that 11 of 18 samples of Findus beef lasagne were found to contain between 60% and 100% horse meat.

All Findus frozen beef lasagnes have been recalled from Swedish stores while in France, the company is withdrawing three products — lasagne, cottage pie and moussaka.

The FSA said it had ordered further tests on the suspect lasagne for the veterinary drug phenylbutazone, which can cause a serious blood disorder to humans in rare cases.

France's anti-fraud body, the Directorate General for Competition, Consumer Affairs and Repression of Fraud (DGCCRF), has launched an investigation.

It is the latest horse meat-related scare to his Europe after equine DNA was found two weeks ago in frozen beef burgers in Britain and Ireland, countries where horse meat consumption is generally taboo.

The consumption of horse meat is more common in other parts of Europe including France, as well as in central Asia, China and Latin America. – Sapa-DPA & AFP