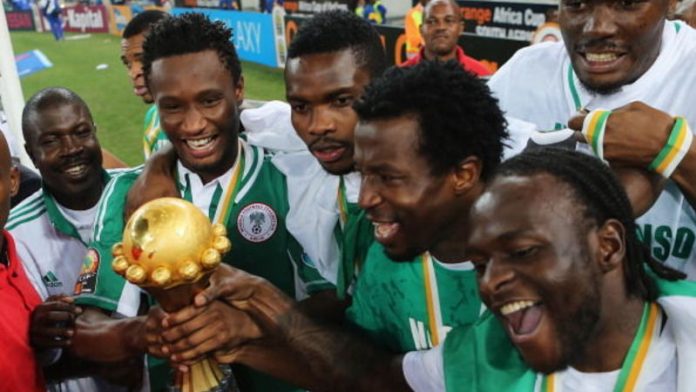 It took seventeen years, but Nigeria's festering football wound has been healed.

In 1996, when the Super Eagles were reigning champions, a bitter diplomatic rift between the Sani Abacha regime and the Nelson Mandela government denied them the chance to defend on South African soil the title they won in 1994, under the captaincy of Stephen "Big Boss" Keshi.

For Nigerians, Bafana's only triumph has ever since been viewed as cheapened by that absence. But last night – on the very spot where the South Africans seized their chance – Keshi wrested back the crown of Africa, as coach.

The most populous nation on the continent is flexing its mighty football muscles once again. It's about time. The talent has always been abundant, but the coaching leadership and mental fortitude has not. Until now.

After the game, Keshi's voice was hoarse after two hours of bellowing at his troops, but his intense pride was unmistakeable. “I want to dedicate this to all Nigerian coaches,” he said. “It's not for me alone. I hope other African coaches can reach this position and make their nations proud.”

“It's a shame that in Africa, when an African coach is in charge, you do not have time. They want you to do get the job today, have a wonderful team tomorrow, and win the World Cup the next day. If only we can understand how these things work, then we might grow better in Africa.”

Bright future
With a World Cup finals looming, the future looks tasty for this young Super Eagles side, who may in time mature into a generation to rival Keshi's 1994 champions. John Obi Mikel has finally emerged as a superb holding midfielder, and a natural heir to Sunday Oliseh.

Victor Moses is an intelligent winger of great promise. And the four young defenders sparkled in the knockout rounds. But at this point, Keshi was unwilling to declare the victors the equal of that side. “What I know is that there's a lot of potential and quality in them,” he said.

“Right now, what they've given is about 80% of what they can give. We've not arrived, we're still working, and building. Yes, we won the cup, because God was on our side, and the Burkina Faso were a great side, but we need experience for this kind of tournament, and the Confed Cup will enhance our knowledge.”

For the Stallions, it was a sad but honourable exit. Jonathan Pitroipa was once again thrilling to watch, with his fine control and speed marking him as a rising luminary of African football.

And he had a superbly cultured midfield foil in Charles Kabore, arguably the most technically accomplished player in this tournament. But their supporting actors were a little outclassed – by both the occasion and the opposition.

Execution
​The Super Eagles were consistently dominant, while never quite finding their stride. But when the solitary goal came, it was deliciously worthy of the grand stage of a packed National Stadium. And it was fitting that it was delivered by one of the home-based players whose selection attracted so much criticism from the Nigerian press.

The Warri Wolves midfielder Sunday Mba showed electrifying speed of foot and thought to flick the ball beyond the reach of a Burkinabe defender with his right boot, then surge into the box and net across Daouda Diakite with a restrained, accurate left-footed volley.

The execution was not technically astonishing, but in the heat of a final, it was a feat of composure. On the evidence of this tournament, Mba will go far, and big-league executives will be making enquiries about him as we speak.

Keshi has not only struck a blow for African coaches – he also became the second man in history to win the Nations Cup as both a player and a coach.

Mahmoud El-Gohary of Egypt was the first – he was top scorer with three goals in the 1959 Nations Cup, for the United Arab Republic, as Egypt was known then (it was a brief confederation between Egypt and Syria). And in 1998 he guided the Pharaohs to victory over Jomo Sono's Bafana Bafana in Ouagadougou.