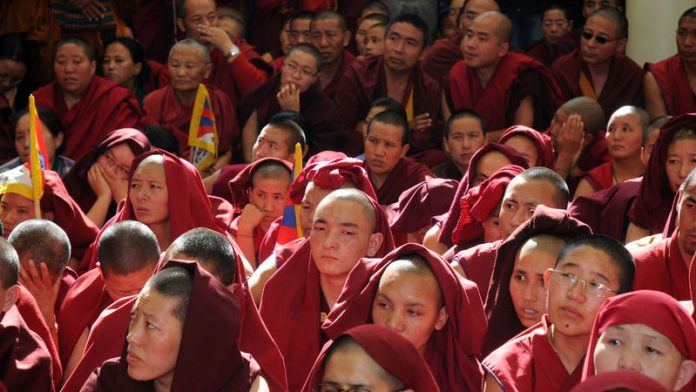 Many said celebrations on Monday were inappropriate while the burnings continued.

At least 20 people have set themselves on fire in the region around Xiahe in Gansu province over the last year, according to exiles and rights groups. Xiahe is home to a large ethnically Tibetan population and is also to the monastery at Labrang, one of the most important centres for Tibetan Buddhism.

The Tibetan Lunar New Year is supposed to be a time for celebration, but many Tibetans in Xiahe said there would be no entertainment this year.

"It really isn't appropriate because of the self-immolations. So we're not marking the new year," said a Tibetan man who gave his name as Dorje. "In Tibet you don't celebrate new year if you are in mourning."

Police have erected road blocks into the town, nestled in a scenic valley some four hours drive from the provincial capital Lanzhou, to keep outsiders from entering.

Nearly 100 Tibetans have set themselves on fire to protest against Chinese rule since 2009, with most of them dying.

Discouraging protests
In the past few months, the government has begun a new tactic to discourage the protests, detaining and jailing people it deems to have incited the burnings.

The latest detentions have taken place in Gansu's neighbouring province of Qinghai, where police last week detained 70 "criminal suspects", 12 of whom were formally arrested, meaning they will be charged.

The government has also seized televisions in Tibetan areas to prevent people from watching "anti-China" programmes broadcast from abroad.

At the same time, Beijing has stepped up propaganda efforts aimed at the outside world, heaping blame on exiled Tibetan spiritual leader the Dalai Lama and overseas Tibetan groups for fomenting the self-immolations.

One monk at Labrang, who spoke on condition of anonymity, scoffed when asked if he believed Tibetans were being encouraged or even deceived by the Dalai Lama.

"They are doing it because this is our country here and we have no rights," said the monk, who added he was related to one of the self-immolators.

Dalai Lama and the self-immolations
Beijing considers Nobel peace laureate the Dalai Lama, who fled from China in 1959 after an abortive uprising against Chinese rule, a violent separatist. The Dalai Lama says he is merely seeking greater autonomy for his Himalayan homeland.

He has said he is not encouraging the self-immolations, but has called them "understandable".

"He is always in our hearts," said another Labrang monk, flicking through a Chinese propaganda book with old pictures of the Dalai Lama before he fled into exile.

China has defended its iron-fisted rule in Tibet, saying the remote region suffered from dire poverty, brutal exploitation and economic stagnation until 1950, when Communist troops "peacefully liberated" it.

The Dalai Lama said last year he expected Communist Party Chief Xi Jinping, who takes over as president from Hu Jintao in March, to embark upon political reform. But there has been no sign of an easing of control in Tibetan areas.

Xi's late father, Xi Zhongxun, a liberal-minded former vice-premier, had a close bond with the Dalai Lama before the monk fled into exile.

Tibetan areas in China have been largely closed to foreign reporters and put under heavy security, making an independent assessment of the situation there hard.

Many of the monks said they were too scared to talk publicly about the Tibet issue. "I'm terrified. People have no idea how bad things are here," said one monk. – Reuters

For a country that is guided by ubuntu, South Africa has a record of embarrassing international blunders
Read more
World

Suu Kyi was once the darling of the foreign media, but her silence over the persecuted Rohingya minority has drawn widespread condemnation
Read more
World

The Tibetan spiritual leader says Chinese President Xi Jinping was ready to discuss autonomy, but hardliners in the government were preventing this.
Read more
World

The Nobel Peace Laureates Summit, which was initially scheduled to take place in South Africa, has been relocated to Rome.
Read more
Advertising