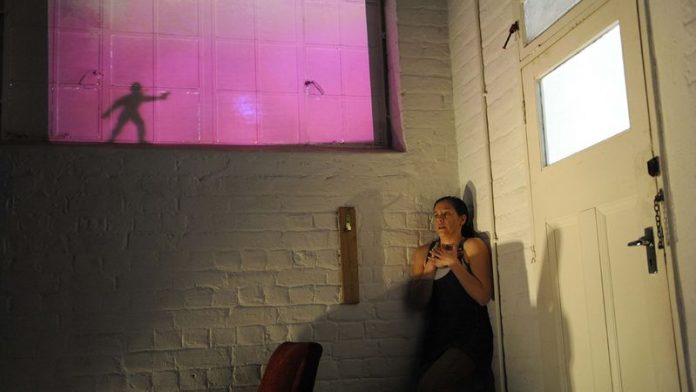 Athena Mazarakis is an award-winning choreographer and performer who works in the areas of physical theatre and contemporary dance. In addition to her own creations Mazarakis has worked with leading South African companies such as the First Physical Theatre Company and the Forgotten Angle Theatre Collaborative. She has been awarded a Gauteng MEC award for most outstanding female dancer (2005) and a Kanna award for most prestigious achievement in dance theatre (2007). She was also awarded a silver Standard Bank ovation award for her choreographic work, elev(i)ate2. Mazarakis is the education officer of the Forgotten Angle Theatre Collaborative.

Describe your current project
Standing By delves into the loaded issue of gender-based violence. It emerged as a shorter work I was commissioned to make in 2011 for Rhodes University’s human rights week. I focused on the issue of the “corrective rape” of lesbians because, despite the horrific statistics, it was an issue that the public was simply not engaging with. I wanted to create a performance that evoked a visceral response to these atrocities, to bear witness to these testimonies in a performance space that forces you to sit with them, where you cannot change the channel or close the newspaper. It asks if we are on standby and ready to take action or if we are simply bystanders who let sexual violence continue. Current reaction to the tragic Anene Booysen case makes these questions even more relevant.

What’s wrong with South African dance?
Apart from the obvious and rather tiresome answer of the growing lack of funding, I would have to say it’s the lack of dialogue and discourse between dance practitioners. We could all do with some robust engagement on dance in South Africa.

What’s right with South African dance?
The tenacity and perseverance of dance companies and choreographers who keep making work despite a lack of resources.

What are you reading?
Ian McEwan’s Saturday. I came to McEwan quite late so I’m working my way through his books. I love how he writes about human relationships and entanglements.

Where do you like hanging out?
In coffee shops that let me indulge my love of watching people. Several places in Rosebank and 4th Avenue Coffee Roasters in Parkhurst are my regular haunts.

What music are you playing in your car?
I’m addicted to listening to 702 when driving, which means I don’t often listen to music in my car, but if I do it’s through my iPod’s shuffle function. With my somewhat eclectic music taste it’s often quite an interesting backing score to travel through Johannesburg.

When you want to escape Jo’burg, which city or town do you like to visit?
I love the shift in pace and majestic vistas of Cape Town.

Which part of Jo’burg do you like?
I’m particularly fond of my neighbourhood, Craighall Park. It is a beautiful area to run and walk in. Delta Park is just a stone’s throw away and it often feels like you’re in the KwaZulu-Natal Midlands rather than in Jozi.

What is your favourite food?
Potatoes in any shape or form, but mostly Greek style with lemon and oregano.

What is the last film that you watched that blew you away?
Les Miserables. I wept, but as a real softie that’s not much of a surprise.

Wine or beer?
Most definitely wine, with a seasonal idiosyncrasy of chardonnay in summer and pinotage in winter.

Now to a cheesy question: cheese or chocolate?
As a certified chocoholic there’s no contest here. Growing up in my parents’ exclusive sweet shop in Bloemfontein has left me with a pretty expensive taste in chocolate.

Do you watch TV and what is your favourite show?
I have a television but I only use it to watch DVDs and series. Homeland, True Blood and Downton Abbey are my current favourites.