Cypriots take to the polls in hopes of a bankruptcy saviour 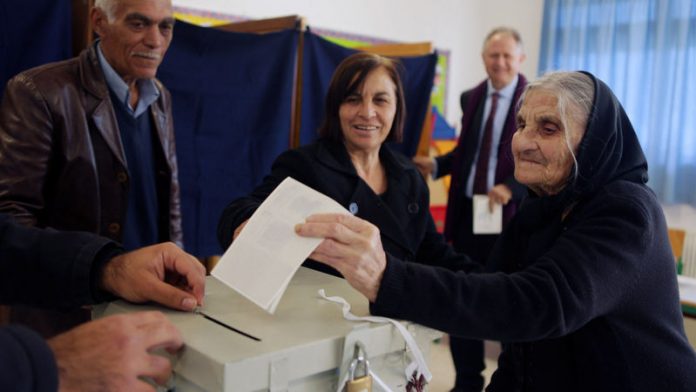 The eastern Mediterranean nation's worst economic crisis in four decades eclipsed its almost four-decade-old partition as the main issue in this year's election, which conservative leader Nicos Anastasiades was tipped to win.

Polls on Sunday showed Anastasiades, the most pro-bailout figure among the main presidential contenders, with a 15-point lead over his closest leftist rival, Stavros Malas that might even secure the outright majority needed to avoid a run-off a week later.

An air of despondency about the country's grim economic prospects hung over Greek Cypriots as they trickled to the polls. Results from over half a million votes expected to be cast were due by 6.30pm.

Election officials reported a low morning turnout in mild late-winter sunshine. Most early voters were elderly, dressed in their Sunday best and heading to church mass.

"We don't want to sign a bailout immediately without looking at the terms and conditions; we want something tolerable," said Kyriakos Georgiou, a 73-year-old retired pharmacist. "We have an economic crisis but they can't be grabbing us by the throat."

Investors are keen to see Anastasiades (66) a lawyer who has led the Democratic Rally party since 1997, clinch victory and get working on a bailout deal with lenders immediately.

He has pledged a quick agreement with the European Union and International Monetary Fund on a rescue, which investors want thrashed out before the island's woes derail progress made in shoring up the rest of the eurozone's periphery.

"It is the survival of our country which is at stake," Anastasiades said after voting in the port town of Limassol, accompanied by his three grandchildren.

Nailing down a deal has proven tricky because almost any way of solving the crisis – from restructuring debt to slapping losses on banks – could set a precedent for other troubled states and damage sentiment just as confidence slowly returns to the eurozone.

Financial help
Fears that Cyprus will never be able to pay back its debt, and German misgivings about its commitment to fighting money laundering, have further complicated talks on a rescue, which have dragged on for eight months.

"Everything is at stake, like it has never been before," said Georgiou Iacovides, publisher of the Cyprus Mail newspaper.

"The country must be rebuilt, Cyprus must be rehabilitated in the European Union. We need a strong leadership to rebuild the country."

Cyprus sought financial help last year after its banks suffered huge losses from Greece's sovereign debt restructuring. The island, which has been shut out of international financial markets since May 2011, needs about €17-billion in aid – a sum worth as much as its entire economy.

Current President Demetris Christofias, a communist, is not seeking re-election.

The last polls showed Anastasiades with just over 40% share of the vote, comfortably ahead of Communist-backed Malas and the other main challenger, independent George Lillikas.

Malas has campaigned on a pro-bailout but anti-austerity platform while Lillikas has rejected onerous terms tied to any bailout, saying Cyprus could swiftly extricate itself by using the natural gas reserves that lie under its shores.

"What we have are two weak candidates against a potentially unpopular figure. Anastasiades is a polarising figure in Cypriot politics, respected but not necessarily liked," said Hubert Faustmann, an associate professor at the University of Nicosia.

Anger at unemployment hitting a record high of 15% cast a pall over campaigning, where rival candidates jockeyed to cast themselves as the best man to steer Cyprus through its economic storm.

Reuniting Cyprus after its division nearly 40 years ago into a breakaway Turkish Cypriot state in the north and the internationally recognised southern state run by Greek Cypriots has lagged far behind as an election issue.

Cypriots, still coming to grips with a cocktail of pay cuts, tax hikes and benefit cuts imposed last year in preparation for a bailout, have been little impressed by any of the rhetoric.

"I hope that things will be better in terms of the economy and jobs, but I doubt it," said Georgios Poullos, a 41-year-old who is unemployed. "It's not in our hands. I think whoever gets in won't change it." – Reuters