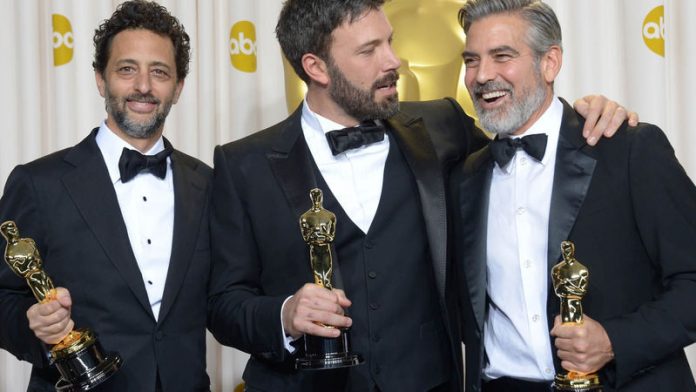 Obama made an unprecedented appearance on Sunday's Oscars telecast when she presented the award for best picture, the first time a president or first lady has ever presented an Academy Award.

Appearing live on screen from the White House in Washington, almost 4 800km from the Oscars ceremony in Hollywood, Obama praised the work of the movie industry before announcing the Iran hostage drama Argo the best picture winner.

Wearing a silver evening dress, Obama said this year's nominated films had "made us laugh, made us weep and grip our armrests just a little bit tighter".

Obama added: "They reminded us we can overcome any obstacles if we dig deep enough and hard enough. They are especially important for young people. Every day they engage in the arts, they learn to open their imaginations … and strive to reach those dreams."

Argo director and co-producer Ben Affleck said he felt like he was "sort of hallucinating" when Obama presented the award.

"The fact that it was the first lady was an enormous honour … it was very cool," Affleck said backstage after collecting the best picture trophy.

List of winners so far at the 85th Academy Awards:

James Bond
Dame Shirley Bassey earned a standing ovation at the Oscars when she led a tribute to James Bond's 50th birthday by singing Goldfinger, the 1964 Bond theme song that launched her international career.

Bassey (76), wearing a gold dress, gold necklace and gold earrings, appeared on stage following a film and music tribute to the Bond movie franchise, which began in 1962 with the first Bond film Dr. No, starring Sir Sean Connery.

Last year, Skyfall, the 23rd instalment of the Bond series – the longest-running motion picture franchise in history – was released and became the highest-grossing Bond film, crossing the $1-billion mark at the global box office.

British singer Adele (24), who swept the Grammys last year with her soulful heartbreak album 21, continued the Bond theme in Sunday's Oscar ceremony with her rendition of the Bond theme Skyfall, which later won an Oscar for best original song. "This is amazing," a tearful Adele told the Oscar crowd.

Bassey has become synonymous with the Bond franchise, singing the theme songs not only for Goldfinger, but 1971's Diamonds are Forever and 1979's Moonraker.

The Welsh diva was preceded on the Oscars stage by actress Halle Berry, who appeared as Bond girl Jinx in the 2002 movie Die Another Day, starring Pierce Brosnan as Bond.

50th anniversary
"Tonight, we celebrate the 50th anniversary of James Bond in motion pictures," Berry said, adding that the music of the films "is as inextricably linked to Bond as the martini, exotic cars and Pussy Galore."

Halle, who won a Best Actress Oscar for Monster's Ball in 2001, was asked about her role as a Bond girl on the red carpet before Sunday's Oscars ceremony.

"I've not been more proud to be part of a franchise than that one," Berry said.

Connery went on to play the British secret service agent five more times after Dr. No until 1971's Diamonds Are Forever.

Bond films have historically received only a handful of Oscar nominations, mainly within the technical or music categories.