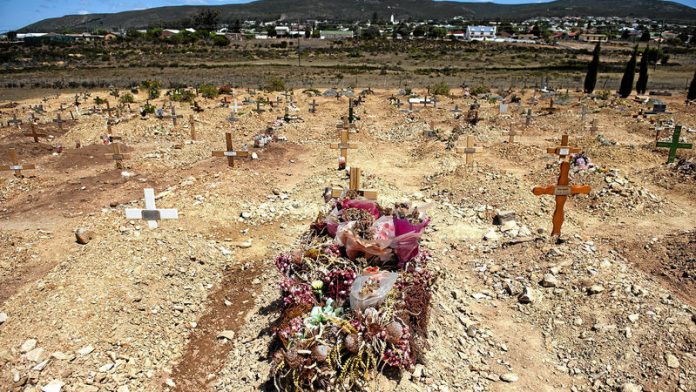 Anene Booysen's grave is easy to find in the Bredasdorp cemetery. Although the many  bunches of Cape fynbos and proteas have wilted in the harsh Western Cape sun, it still makes the grave stand out among the mainly bare tombstones in the graveyard.

The inscription on her grave marker simply gives her name, says she was born on October 30 1995 and died on February 3 2013.

What it does not say is that she was the victim of a gang rape that shocked the world. Mutilated and disembowelled, the 17-year-old was left for dead in an alley on a deserted construction site.

The outpouring of grief at her funeral last month was this week replaced at the Bredasdorp Magistrate's Court by a seething anger at the injustice of the crimes against women in the country. Crime statistics released by police last year for the period April 2011 to March 2012 showed that 64 514 sexual crimes had been reported.

The women demonstrating outside the court where they had gathered on Tuesday for the bail application of Jonathan Davids (22), who was arrested for Booysen's rape and killing, have had enough. Their posters reflected their fury. "She didn't deserve it," said one. "Double life sentence," read another poster.

A grandmother of two young girls, Anna Kees said she was fearful for the safety of her own 22-year-old daughter. Like the other locals interviewed by the Mail & Guardian, she spoke of how her Bredasdorp community was fighting the scourge of drink, drugs and poverty.

Although some Twitter users have compared the slow trickle of updates coming from Bredasdorp with the heightened coverage of the bail hearing for "Blade Runner" Oscar Pistorius in Pretoria last week, locals said they were engrossed in both cases. Just as she had wept for Booysen, Kees said she felt strongly about the death of Reeva Steenkamp, whom Pistorius has been accused of murdering.

Good boy
"I feel shocked and sad," said Kees. "Like Booysen, Reeva Steenkamp should not have died. Oscar was a hero to us all. We watched his bail hearing on television all last week."

Although high-profile politicians descended on Bredasdorp for Booysen's memorial service, there was no sign of them at the bail hearing. They seemed to have moved on to other causes.

The media were still there in numbers, competing for space in the small courtroom with Davids's family and friends from Bredasdorp. Many of them said they would help to raise the money if he was granted bail.

Dressed in a grey hooded top, Davids spoke so quietly that magistrate Graham Cupido asked him to speak up. He told the court his mother had died in 2003, but his family whispered among themselves that she had died in 2000. One of his aunts told the M&G that his mother had been murdered. Davids told the court that he had never known his father, had no fixed address and earned about R1 500 a month selling flowers.

His aunt, who declined to be named, said he was a "good boy" who sometimes drank too much.

"He wasn't involved in this murder," she said. "We know him and we know he could never do something like this. We are here for him because he is innocent."

The court was told that Booysen was found at the Asla Magwebu construction site where she worked. Before she died in hospital, state prosecutor Maria Marshall said  the teenager told hospital staff that "Zwai" and six other men were responsible for her injuries.

Davids's nickname is Zwai, but this is where the story becomes complicated. Davids told the court he knew of another Zwai who used to live in the area, but had moved away. "I heard he's a gangster, a 28 [gang member]," Davids said. He said he did not know whether Booysen knew this man, but one of his relatives said that she had gone out on numerous occasions with the other Zwai.

"I don't know what his real name is," Davids said in court. "I only know him as Zwai."

Nuisance
On the night Booysen was raped, Davids said they had gone to the same pub for a drink. He said he knew her well and had lived with her foster family for a short time.

Davids said that he had greeted Booysen that night and stayed at the pub until midnight, when he left with two male and two female friends. They bought a box of wine, took it home with them, drank it and went to sleep.

But Marshall alleged that a witness had seen Davids making a nuisance of himself on that Friday, February 1. The witness said Booysen told Davids to leave her alone, a claim he denied in court.

Marshall told the court that Davids had marks on his left arm and neck when he was arrested on February 2. His co-accused, Johannes Kana (21), was with him in court and, according to information given by investigating officer Warrant Officer Edmund Abels, he will not be applying for bail because he had confessed to raping and assaulting Booysen. A third man who was arrested was questioned and released. Police have not disclosed whether they are searching for the other men said to have been involved the attack.

In the stiflingly hot courtroom, Marshall warned Davids that, should he be released on bail, the police would not be able to guarantee his safety.

"If you're granted bail, are you not worried about your safety? They could hurt you," Marshall asked.

"They are not allowed to," Davids responded.

Constant struggle
Marshall asked why he should be freed on bail. "Because I'm innocent," he said.

The court heard that Davids was convicted of theft last February and had received a five-year suspended sentence. He had also had three assault cases against him withdrawn in Bredasdorp, Marshall said.

But Davids did not get bail.

The M&G drove to the pub where Booysen had been drinking on the night she was attacked. David's Sports Bar and Pub was closed, but the sign on its wall told of the dangers lurking within the community. "No drug dealers," it warned. "Don't come here."

Around the corner from the pub is the construction site where Booysen worked. The alley between two matchbox houses where Booysen was raped and brutalised and was later found by a security guard is not far from her own home, from which Booysen's foster mother, Corlia Olivier, was called to help her as she lay close to death. She was taken by ambulance to hospital, where she died.

Life for Booysen was a constant struggle, even after she was placed in foster care. Olivier previously told reporters that Booysen had to drop out of school to help the family to pay its bills. Sometimes, she said, there was only a slice of bread and water in the home.

Olivier was nowhere to be seen in the small town. A resident said she had gone to stay with relatives, which is why she was not in court. "She has had enough of all the media attention," she said.

The curtains of her small home were tightly drawn. In the bleak front yard, a white cross and a pink flower had been newly planted in the empty flowerbed.

There is a crisis of violence against women. But men also suffer brutalisation. This contributes to the abuse of women
Read more
Opinion

It's time to get serious about another SDG: ending violence against children
Read more
Opinion

We have the organisations, the policies, the laws and the insights to try to stop it, but still it goes on
Read more
Education

Thabani Mzolo, 23, appeared in the Durban magistrate's court on Wednesday where he was served with an indictment
Read more
Opinion

Has the university, rocked by protests in 2016, done enough to address gender violence?
Read more
Advertising
Continue to the category
Politics