Cheers to a good year for craft beer 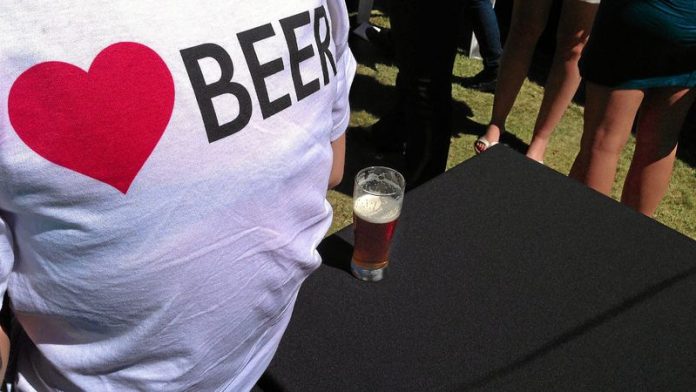 And so it was: nubiles in dirndl’s flounced around like Boer Brunhildas surrounded by the hellfire of sunlight bouncing off silver kegs and accentuated by the customary beer-induced haze.

The Shooter had set out with the grand plan of interviewing their heaving bosoms about their favourite beer, but instead was cornered by a lederhosen-wearing man sporting the sort of narrow moustache that was more Furious Fuhrer than Charlie Chaplin.

By late afternoon, the jokes were obviously getting flatter than a Castle Lager, but still induced hysterical laughter that suggested the taste was in the liquid more than in the wit.

The tolling of the nearby church bells: a reminder of Ernest Hemingway’s observation that an intelligent man is sometimes forced to be drunk to suffer the company of fools.

But the third instalment of the Clarens Craft Beer Festival is on course to retain its status as one of the foremost craft beer festivals in the country.

Smaller than last year with 20 breweries participating, it is nevertheless — because of the idyllic setting and opportunity to convert hops and malt into fluoroscent pee now extended over two days — growing with over 3 000 punters attending this year. And, with more melanin in attendance than in 2012, the festival is a signifier that craft beer is catching on in South Africa.

There were a few eyebrows raised when Mthunzini Brewery’s Chilli Beer — a spicy blonde much like Scarlett Johannson — placed second. It is a better beer than last year’s version that was a tad too prickly with chilli, but the purists did have a moan that a novelty beer had made the top three. Nobody likes a purist, anyway.

There are nevertheless some really great beers to be excited about this year. Newcomers Standevan from Alveston in KwaZulu-Natal have a well-made African Pale Ale, made from 97% locally produced hops and topped up with Cascade for a dash of citrus and fruitiness. They also unleashed The Beast at Clarens, a new beer that is a darker version of their Pilsner that combined the underlying bitterness of a Pilsner with caramel and vanilla tones. Brewer Shaun Standevan has started brewing The Beast for retail, so it is well worth looking out for.

The Rustenburg-based Brauhaus am Dam’s Dunkel was also a highlight at Clarens, as was Copperlake Breweries’ Dark Lager with its lovely roasted-malt aroma and low hop bitterness.

The Clarens Craft Beer Festival signals the beginning of the beer festival season in South Africa and, judging by the quality on offer, this will be a very good year for craft beer.