Courage amid the confusion 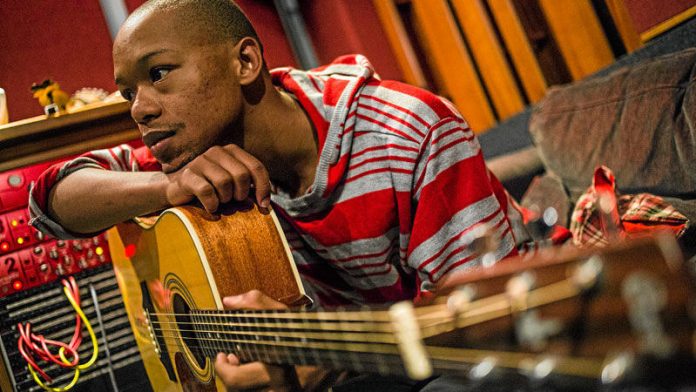 ‘I was supposed to be a chartered accountant,” says Nakhane Toure. “That’s what my dad wanted for me.”

The Eastern Cape-born Toure, who recently turned 25, is sitting on a black leather couch, wearing a red and grey hoodie and clutching an acoustic guitar tightly to his chest like a security blanket. He is in the Sting Music studio, which is down the road from the Maboneng Precinct on Main Street in Jo’burg.

The regular Just Music producer Matthew Fink is with him in studio. They have been here for two weeks and have laid down the foundations for eight or so songs for Toure’s debut album.

As we sit listening to the recordings, I can’t help feeling a sense of relief that this incredible talent escaped going to work for his father’s human resources company.

With a voice this spellbinding (think Jeff Buckley meets Thom Yorke) and songs as gut-wrenchingly beautiful as those that Toure writes, it would have been a tragedy if he had been lost to the corporate world. This kid was born to be an artist.

Fink stands to attention at the desk in a bright yellow Stax Records T-shirt, loading up the sound files. Two photographers are prowling around the room, snapping away at the pensive-looking Toure.

The previous night, Toure had played a Just Music showcase at World of Yamaha and, despite a few sound glitches, had laid on quite a show. He had chosen to unleash a handful of new numbers he had written in preparation for entering the studio, the best of which was named Christopher, a song that sees the young Toure channelling influences from Dirty-Mind era Prince and the late Zulu Maskandi queen Busi Mhlongo. Fink queues up Christopher for us to hear.

It opens with an ambient intro, before you hear Toure crooning “Just make sure you got it right” repeatedly.

After a minute and a half, the guitar riff arrives and then that catchy disco beat. It’s electric, mesmerising, a grand vision from Toure, a very serious song that has hooks in all the right places.

“What will I be without you?” sings Toure.

The song is everything that is great about Toure, his genre-defying songs manage to find a middle ground between being overtly earnest and sincere, and playful and fun.

Just Music is considering it as the first single, to launch Toure’s album.

As usual, Toure is slightly conflicted about the song, wondering aloud whether South African radio will take to “a gay love song”.

However, he quickly counters his own labelling, “because that’s not what the song is completely about, there’s more to it than that”.

“A lot of my songs are guy’s names,” says Toure. “A friend thought it was boyfriends. It’s not boy­friends — there is a lot of biblical code there.”

We begin to chat about the conflict inherent in so much of his music, the fine line between Toure’s sexuality and his religion.

“My work is about sexuality more than anything else. I get off on the performance. There is nothing sexier than music.

“The thing is,” he says, pausing for a second, “my songs are so frighteningly personal.” He cringes in his chair. “But I can’t censor myself.”

And he doesn’t. If you listen to one of his songs, titled In the Dark Room, one can’t help feeling an incredible sense of empathy for the character in the song crying out, “I hope you know I will hate myself in the morning for this”.

“As much as sex is a big part of my music, I still find sex a little bit gross. It’s just very animalistic. For me, it’s so confused, it’s so conflicted, which I am both comfortable and uncomfortable talking about. I don’t know where I stand.

“I wish I was more asexual, I wish I had no desire for anyone. My religion is imposing an asexuality on me and I’m okay with that … until I figure out what’s going on in my life.”

I ask Toure whether his songs are an exorcism of sorts, a way of processing.

“Exactly — the nail on the head. I write about what troubles me. That’s a big part of it.

“A lot of people say weird shit to me when they find out I’m a Christian. Someone said to me the other day: ‘Ahh, you should know better than that.’ Just like that, he said: ‘I really wish you were smarter than that.’”

Confident and confused
Toure has been playing live for nearly two years now and has slowly built up a following in Johannesburg. I ask him whether he feels any connection to other black artists who have made a name for themselves in the past few years.

He says, musically speaking, he is a fan of The Brother Moves On and the BLK JKS, but is also a big fan of Pretoria’s punk outfit, the Make-Overs.

“Scenes are attractive, as they sustain themselves, but I guess I’m too moody to be part of a scene.

“It’s very interesting being a black person in South Africa in 2013. I was thinking of calling my album Brave Confusion. I don’t think there is anyone more confident and more confused than the black youth. We are left wondering, where and who we are?”

I ask Toure whether being an “African artist” is important to him.

“It never used to be. It is now, especially in South Africa. Everything is political — you sneeze and it’s ­political. Like choosing my stage name, taking the name of Ali Farka Toure, I feel like I’ve helped people pigeonhole me. It’s easy to call me an Afro-folk star. I think I have complicated things for myself, but that’s not a bad thing.”

Toure is clearly battling many conflicts in his life and music, all of them feeding into his songs.

I get the feeling that his sexual and spiritual angst are right at the core of his creative process and the state of confusion that pours out in his songs is very much about Toure making sense of his life.

It’s a very brave approach to take, opening up his inner world to his listeners and it makes me think that calling his album Brave Confusion  might just have been the most honest act of all.

'I remember that I was supposed to perform about two or three songs. But the DJ ended up adding another song because everybody was just having fun'
Read more
National

Slice of Life: Learning from a place of failure

​What does foreign validation of SA music really count for?

The need for cosigns from non-Africans is a long-standing feature of the South African music industry that undermines our artists’ capabilities.
Read more
Friday

​’Examples’ shows us the musical law of Eric Lau

With talented friends around him, the electronic music producer is recrafting instrumental rap with his latest album.
Read more
Friday

She has no concerns but – as the new ‘Mercedes’ single suggests – the celebrity trap awaits her.
Read more
Advertising
Continue to the category
Politics