Motsoeneng gets up SABC board’s noses 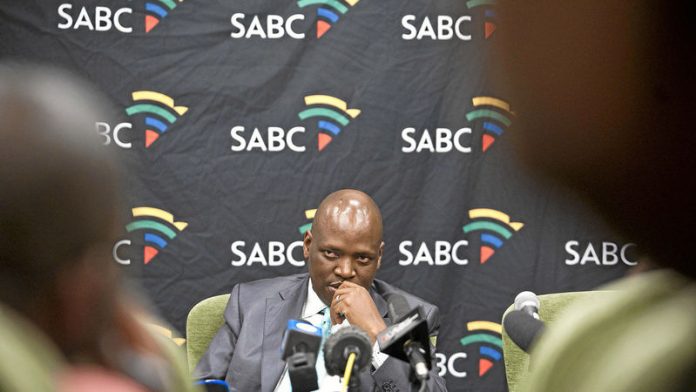 The final straw that apparently led to the removal this week of Hlaudi Motsoeneng from his controversial role as acting chief operations officer at the SABC was a massive row between him and powerful board member Cedric Gina, which one board member described as "really ugly".

Some board members had also complained that Motsoeneng was using a report, which he had commissioned to delve into allegations contained in a Special Investigating Unit probe into corruption at the SABC, to try to leverage their support for his permanent appointment to the chief operations officer post.

"There was this huge altercation between Hlaudi and Cedric," a board member said of the SABC board meeting that took place on  February 21.

Gina accused Motsoeneng of spreading a malicious rumour about him, which he denied. Gina is the president of the National Union of Metalworkers of South Africa. His row with Motsoeneng followed unsubstantiated claims made two weeks ago to the Mail & Guardian that Gina had been involved in setting up a 24-hour news channel with the politically connected Gupta family on the DStv satellite platform.

Allegations were made that Gina might have received a cut from the deal. Gina vigorously disputed the claim and the M&G found nothing to back it up.

The announcement of the launch of the Gupta channel left the SABC red-faced because it had been planning to launch its own news channel on DStv, but had failed to come up with the cash to run it.

The board took the unprecedented step of cancelling its February 26 appearance before the parliamentary portfolio committee on communications to call an unscheduled board meeting in Cape Town – where it promptly removed Motsoeneng, returning him to his old post as the group executive of stakeholder relations and provinces.

Unexpected board meeting
There was no voting on the removal of Motsoeneng from the top post and consensus was reached by the board.

This occasion was said to be fraught with tension, seeing that board chairperson Ben Ngubane was informed about the unexpected board meeting but refused to attend, according to board sources. It is understood Ngubane had been warned about what was going to happen at the meeting.

In light of Ngubane's absence, deputy board chairperson Thami ka Plaatjie convened the meeting, which was held in the Crystal Towers hotel in Century City. The M&G has been informed that Motsoeneng was also not present at the meeting.

Board members have been concerned about Motsoeneng's behaviour after he became involved in following up a Special Investigating Unit (SIU) report, which the M&G was told cost the SABC R20-million.

The SIU was hired by the board after the auditor general's office issued a report on the SABC in September 2009. The report highlighted wasteful expenditure, irregularities and graft at the broadcaster.

Motsoeneng's handling of a second report he commissioned to look more deeply into the allegations contained in the SIU report was particularly troubling to some board members. It was not discussed in meetings, but some board members had complained that Motsoeneng was trying to leverage their support for his permanent appointment to the post. Board members claimed that some of them had been accused in this report of not declaring their business interests, which was untrue. The second report had also accused them of not taking action because they were the accounting officers, but vital memorandums revealed that the actions taken by the board had been overlooked in the report.

The M&G understands that Motsoeneng commissioned the second report with the board's permission. It has also been alleged that this report cost the SABC R7-million, but board members told the M&G they were unaware of how much it had cost because it had been delegated to management. Motsoeneng declined to comment on this allegation.

Positive news
Some members of the board were unhappy that Motsoeneng took the decision to expand the broadcaster's relationship with the Gupta-owned New Age newspaper, as revealed by the M&G last month. The SABC planned to involve the newspaper in a monthly programme on its Sunday Live current affairs programme on SABC1, despite the controversy raging over the paper's involvement on the SABC's Morning Live slot.

Three of the country's state-owned companies – Transnet, Eskom and Telkom – have paid millions of rand to bankroll the business breakfasts, which benefited the New Age. It has been accused of being a pro-government newspaper, but it claims it is focusing on the provinces and highlighting positive news.

Some members of Parliament's communications portfolio committee felt it was unacceptable that they were stood up at short notice because the explanation offered that "the SABC was not ready" was unsatisfactory.

Congress of the People (Cope) MP Juli Kilian told the M&G they only received notification at midnight on February 25 that the board would no longer be appearing before them the following morning. Cope is now calling for the dissolution of the board and a forensic investigation of the broadcaster's books. Kilian said her party would also ask the public protector's office to investigate the SABC. "The sudden axing of Hlaudi Motsoeneng will not cure the SABC of its ills," she said.

Speaking for Communications Minister Dina Pule, Siya Qoza confirmed the minister had planned to attend the parliamentary meeting  before it was abruptly cancelled.

"The minister had made arrangements to honour Tuesday's meetings," he said. Pule is currently attending a conference in Barcelona.

Board members are waiting for Pule to return from Barcelona and it is expected she will attend a meeting with board members next week.

Removed illegally
A board member said Motsoeneng could have been removed illegally because he had been acting in the post for more than a year and might be able to get the job back because legal processes had not been followed.

The M&G could not reach former SABC executive Mvuzo Mbebe, whose claim against the public broadcaster that he was promised the job of chief operations officer by former communications minister Ivy Matsepe-Casaburri has apparently prevented the broadcaster from appointing a person to the post permanently.

Board members said they do not know why the matter has not yet been resolved, because Mbebe currently occupies the lucrative post of Afcon chief executive.

It is unlikely that this will be the final episode of the Motsoeneng drama. Like the corporation's soapies, but with even more twists and turns, Motsoeneng might launch a comeback, especially because Ngubane is a strong supporter.

Because of Motsoeneng's strong stand against corruption, Ngubane has frequently defended him from attacks by those who believe he should not occupy the key role because he does not have a matric.

However, in recent months, Motsoeneng has been accused of censorship by his editorial staff. This was after he pulled a satirical Fish & Chips Co television advert, shut down a MetroFM talk show on the upcoming elective conference at Mangaung and canned an interview with cartoonist Zapiro, aka Jonathan Shapiro, because he believed the programmes could offend President Jacob Zuma or the ANC.