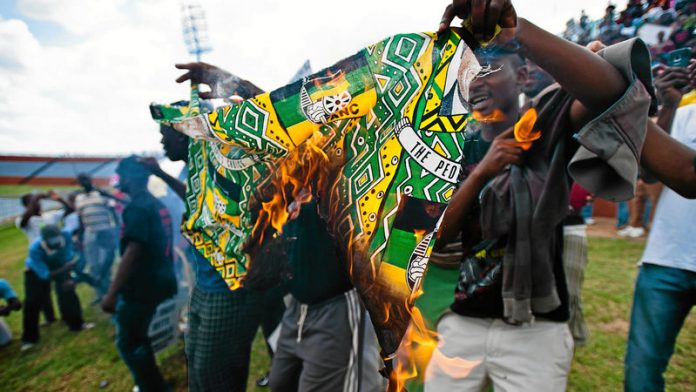 It is time to address our contradictions if we are to survive the difficult years ahead.

For various reasons, we will one day look at 2013 as a watershed year for South Africa's young democracy. Not only is it the year that the ANC appears to have marked as the beginning of its renewal, it is also the year during which South Africa's challenges are likely to be more acute. It is a time infested with hazards and possibilities in equal measure and could make or break the country.

There is a widespread realisation that our social and economic structures cannot continue as they are and that we need a significant shift in how we conduct the affairs of our nation if we are to avoid a violent, inequality-driven meltdown. However, there is a smaller number of South Africans who recognise that the violent degeneration in our political culture is to some extent an indication of endemic institu­tional failure. The masses, it appears, are rapidly losing confidence in the willingness of those in positions of influence within and outside the state to represent their interests honestly.

Not walking the talk
While there are many reasons for this, the most common is a failure of those in positions of leadership to demonstrate empathy for the difficult positions in which those they lead, or who look up to them, find themselves. Leaders simply do not walk the talk and often take decisions that are in sharp contrast to what they implore their followers and subordinates to do. In this respect, the attention is generally focused on senior politicians, but this issue is just as important for those in nonpolitical leadership positions.

South Africa's economy and fiscal position are now at a point where difficult sacrifices are required in order for us to put ourselves in a better position to face the future. We are in a weak competitive position because our input costs are high and rising all the time against greater global competition where the most successful organisations and countries are those able to offer the best at the most aggressive prices. At some point soon, the government, business and ordinary people are going to have to give up certain benefits for better long-term benefit.

Currently this discussion appears directed in the main at unions and workers, who are said to be overprotected by labour laws in particular in the context of rapidly rising labour inflation. This is an argument vigorously objected to by the trade union federation Cosatu and its allies, who blame business for prioritising profits over people. There appears to be no likelihood of a resolution to this in the foreseeable future.

On the other hand, we have a finance minister whose voice has become hoarse from repeating a mantra of personal savings, an end to wasteful government expenditure and rampant corruption. Pravin Gordhan's message has been clear: the reckless expenditure, acting as if money grows on trees, needs to stop. If the glut of what he calls "vanity projects" is anything to go by, his own colleagues are not paying much attention to his increasingly desperate pleas.

Despite our difficult economic competitive position, we also have an executive remuneration culture that appears oblivious to the already difficult position of the majority of South Africans. Some of the salaries and bonuses published by many listed companies send a message to the workers and the rest of society that their difficulties don't matter, and that the sacrifices they are expected to make are for the benefit of the economic and political elites.

The question we have to examine honestly is whether, without the requisite demonstration of goodwill, there is any hope that consensus between the various, warring stakeholders in our economic discourse can be achieved. At the moment, for as long as the excesses that the media and other organisations expose within the state and the private sector, this looks totally impossible. We need a deep cultural change that recognises that, taken as a whole, our society is in the throes of crisis so serious that the country can degenerate into anarchy.

Powerful, symbolic leadership
What South Africa needs most right now is the emergence of powerful, symbolic leadership, where those at the top of various sectors modify their personal behaviour to demonstrate a new seriousness about the required culture change. We need greater use of the word "I" than the disingenuous collective or third person. We need less defensive excuse-making and more proactive, personal credibility risk-taking, grounded in a deep sense of social ethics.

It will neither feed all the poor nor immediately solve the greater government waste problem, but a symbolic gesture by President Jacob Zuma — such as reducing all expenditure on his and his ministers' personal comforts — would go a long way. The grotesque construction at Nkandla and hundreds of millions spent on the rest of his Cabinet undermine Gordhan's critical message about a culture of frugal public expenditure. His ministers would also achieve better standing if they ditched the massive German saloons they choose to drive in favour of still comfortable but more understated vehicles.

The corporate sector also would not save many jobs but it is really offensive for countless annual reports to report huge remuneration packages in companies where margins remain stretched and the possibility of retrenchment is forever hovering above the heads of their employees. Like the politicians, it would assist their standing if they refrained from flaunting their world-class remuneration packages through the crass purchase of the latest and greatest toys. It causes resentment among the workers and makes empty their words about cost-savings.

Zero percent wage increase
​Sacrifices, the likes of which now need to be the norm in South Africa, cannot be achieved on the back of a leadership cadre that is seen to be speaking with a forked tongue because it expects those less fortunate to shoulder the burden while it continues with business as usual.

We are approaching a stage where workers might have to agree to 0% wage increases to save jobs and improve competitiveness, executives to take salary cuts and for the government to give tax breaks to corporations that will create jobs. These need the powerful force of example to succeed otherwise we have a cat-and-mouse game in which there are no winners.

South Africans have come to expect social and economic transformation to be achieved through legislation, the classic symptom of a low-trust society, but this method can only go so far. This country needs to make a conscious decision to cultivate a different ethos, to construct a social equation that is inclusive and empathetic and, given our polarised environment, this will take exceptional leadership.

There is also a mistaken belief that bureaucratic interventions such as the national development plan and the new growth path will deliver a utopia. This is also naive. For these to succeed, we need to start making them and the sacrifices required a personal responsibility rather than an abstract political problem. If we fail at this, we shall always be the country that almost was but never could be. Songezo Zibi is a member of the Midrand Group