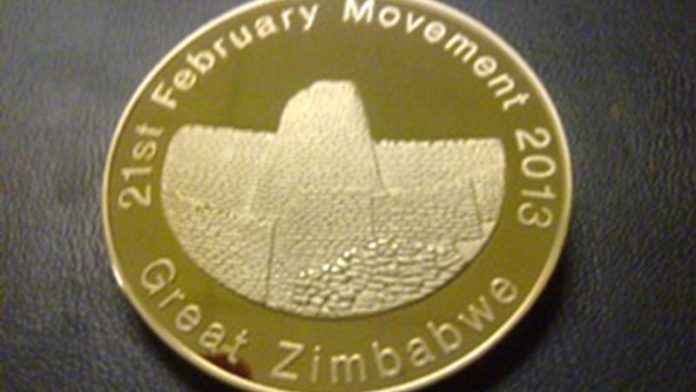 As Zanu-PF prepares to throw a lavish birthday party for President Robert Mugabe in Bindura at the weekend to celebrate his 89th birthday, deep divisions have emerged between the leaders of the Zanu-PF Youth League and party bigwigs. They are slugging it out over who will take credit for a set of gold and platinum coins that will be given to Mugabe as a birthday gift.

Last week, the Mail & Guardian reported that the youth league had commissioned coins bearing Mugabe's face on one side and the Great Zimbabwe ruins on the other. One set is to be given to Mugabe and the rest are to be auctioned, which is expected to raise $1-million.

The coins were sourced through the Great Zimbabwe Mining Circle Trust (GZMCT).

However, youth league officials said this week there had been clashes with senior party members who were trying to take control of the project for personal financial gain.

“It's clear that they want to take over and be involved at the last minute, when it is us who conceptualised the whole thing from the onset," said a Zanu-PF youth league leader.

The officials said the proceeds from the coin auction would go to a charity of Mugabe's choice.

Minted in SA
A South African minting company, Global Gold, was commissioned by the youth league last month to mint the coins.

According to information on Global Gold's website, the company manufactures and distributes a range of jewellery, and provides corporate supplies, including medals and coins, wooden boxes for coins, lapel pins and customised cufflinks.

The officials claimed that Global Gold did not deliver the coins last week as was agreed after senior Zanu-PF members secretly met company officials and instructed them not to deal with the youth league.

“The manufacturers [Global Gold] were in the country last week. What would they be doing here when there is a job still to be done and completed?" a source at the GZMCT who asked not to be named said.

It could not be established how much was paid to Global Gold for minting the coins.

The GZMCT chairperson, Tirivanhu Mudariki, had not responded to questions from the M&G by the time of going to press.

Political observers said the row over the coins reflected the youth league's unwillingness to stand up to senior party officials. The league's members were mere pawns in the Zanu-PF hierarchy and could make no meaningful contribution.

One political commentator, Dumisani Nkomo, said the youth league “obviously lack the resource and mobilisation base to push through the project".

Mugabe's birthday celebrations are usually marked with pomp and fanfare, and senior party officials and companies chip in with cash donations and gifts.

This year, the diamond mining company, Mbada Diamonds, donated $89 000 for Mugabe's birthday cake, which will weigh 89kg to coincide with his 89th birthday, and the Reserve Bank governor Gideon Gono reportedly gave Mugabe 89 cows as a birthday gift.