Kenya in limbo as commission admits to failing vote system 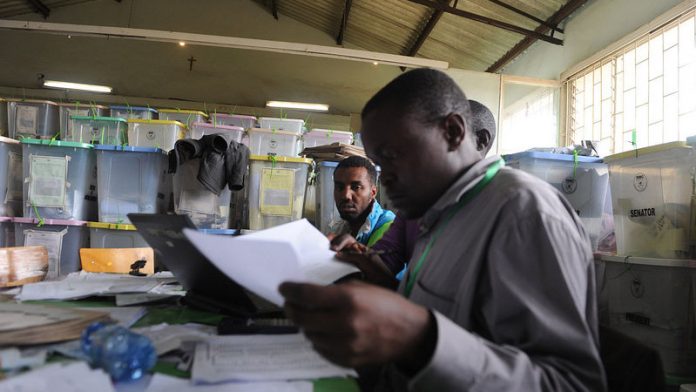 The election commission on Wednesday said that the final results of Monday's presidential election should be released on Friday. Officials began transporting the tally sheets from voting locations to the capital to begin a count of the vote, the country's first since its 2007 election led to massive violence that killed more than 1 000 people.

People in Kenya grew increasingly frustrated that the announcements of public vote tallies stopped close to 48 hours after polls closed. The breakdown of the electronic vote system has meant that less than half of preliminary results were released. Officials – who have been working to ensure violence doesn't break out this election – are calling for patience.

"The delay is giving rise to conspiracy theories. People are panicking about the delay in the results of the elections. But unlike [the] last election there is a level of restraint," said Kevin Muriunge, a 25-year-old student.

In an example of rising agitation, youths in the city of Garissa, near the Somali border, gathered near the vote tallying centre and began rioting, drawing a response from police, who opened fire. One teenager was killed, said Musa Mohamed, a doctor at the Garissa hospital.

William Ruto, Kenyatta's running mate, urged the electoral commission to speed up the release of results.

"As we are all aware, the country is at a standstill at the moment," Ruto said.

Back-up system
Aisha Abdullahi, an African Union official, said it was good that Kenya had planned for a back-up system – the physical vote tallies – given the breakdown in the electronic transmission system. He blamed the breakdown on a failure of central computer servers.

"Yes, we in Africa are trying to catch up with you guys with electronic things," said Festus Mogae in response to a question from a European reporter. Mogae is a former president of Botswana and head of the Commonwealth observer mission.

"That it's failed is no surprise to me. It often does in our countries."

At an evening news conference, the election commission chair, Ahmed Issack Hassan, tried to assure the country that all votes cast would be reflected in the final result. He urged any candidates to take any objections they have to court.

Referring to long voting lines during Monday's vote, Alojz Peterle, a former president of Slovenia and the chief observer in the European Union observer mission, said Kenyans have demonstrated they are capable of great patience. "But even more patience is called for now," he added.

The election commission chairperson announced late on Tuesday that hundreds of thousands of ballots that were rejected for not following the rules would be counted in the overall vote total. That makes it very difficult, given the tight race, for either top candidate to reach the 50% mark needed to win outright.

Election observers from around the world said on Wednesday that Kenya carried out a credible election, but the groups reserved final judgments until the process is completed. Some observers said a runoff between Odinga and Kenyatta is likely.

The partial preliminary results on Tuesday had shown an early lead for Kenyatta. Odinga's camp told supporters that the votes from his strongholds had not yet all been tallied.

'Foreign powers'
The statement from Kenyatta's coalition on Wednesday implied that the British high commissioner pressured the commission to make the decision on the spoiled ballots, thus ensuring a runoff.

John Stremlau, an election observer with the Carter Centre – the body run by former US president Jimmy Carter – said it might be better for Kenyatta's coalition to use "foreign powers" as a whipping post than attacking Kenyans.

"It does seem to me to be a mindset of the old colonial era that the foreign powers would be dictating to the [election commission] in any way," Stremlau said, adding later: "There are going to be accusations in every election … and they must be backed by evidence. Show the proof and let the judges decide and we'll all be better off."

Franklin Bett, an official in Odinga's party, echoed that statement. "Talk is easy. Let them come with the evidence."

Kenya is the lynchpin of East Africa's economy and plays a vital security role in the fight against Somali militants. The US embassy in Kenya is the largest in Africa, indicating this country's importance to US foreign policy.

The US has warned of "consequences" if Kenyatta is to win, as have several European countries, because Kenyatta is an International Criminal Court indictee.

'Shadowy, suspicious'
The coalition of Kenyatta – the candidate who faces charges at the International Criminal Court and is the son of Kenya's former president – accused the British high commissioner of "shadowy, suspicious and rather animated involvement" in efforts to get the election commission to decide that rejected ballots should still be counted in the overall vote total.

Britain's foreign office said claims of Britain's interference "are entirely false and misleading". It said the UK soldiers in Kenya are part of a regular training programme planned nine months ago, "completely unrelated to the Kenyan elections". It said Britain has no position on the rejected votes, saying that the election commission or the courts should decide.

"We have always said that this election is a choice for Kenyans alone to decide," the foreign office said, adding: "We urge all sides to ensure calm, avoid inflammatory statements, and to take any disputes to the courts." – Sapa-AP