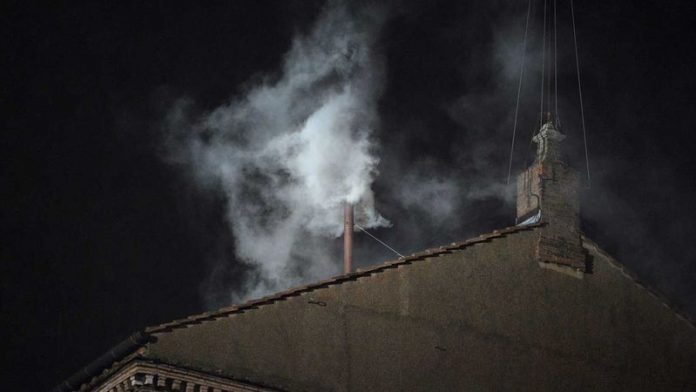 The election came on the first full day of voting by the 115 cardinal-electors, who secluded themselves behind the Vatican's mediaeval walls on Tuesday afternoon – more quickly than many had expected.

A joyous crowd in St Peter's Square on Wednesday started cheering and applauding as the first puffs of white smoke emerged, braving persistent rain and chill winds to get a glimpse of history.

The secret conclave began on Tuesday night with a first ballot in the Renaissance splendour of the chapel and four ballots were held on Wednesday. The white smoke indicated the new pontiff had obtained the required two thirds majority in the fifth ballot. Following a split ballot when they were first shut away amid the chapel's Renaissance splendour on Tuesday evening, the cardinal electors held a first full day of deliberations on Wednesday. Black smoke rose after the morning session to signal no decision.

Whoever has been chosen to become the 266th pontiff in the church's 2 000-year history faces a daunting array of problems, including sex abuse scandals, infighting within the Vatican bureaucracy and the growing spread of secularism.

Benedict abdicated unexpectedly last month, saying he was no longer strong enough to confront the challenges besetting the Catholic church.

Brazil and Italy's top contenders
No clear-cut front runner had emerged in the days before the conclave, with some prelates seeking a strong manager to reform the much criticised central administration, while others want to see a powerful pastor to spread the word of the church.

Italy's Angelo Scola and Brazil's Odilo Scherer were seen as strong contenders. The former would return the papacy to Italy after 35 years in the hands of Poland's John Paul II and Germany's Benedict XVI. Scherer would be the first non-European pope since Syrian-born Gregory III in the eighth century.

However, a host of other candidates have also been mentioned as "papabili" – potential popes – including US cardinals Timothy Dolan and Sean O'Malley, Canada's Marc Ouellet and Argentina's Leonardo Sandri.

Cardinals held an initial inconclusive vote on Tuesday evening and a further two followed on Wednesday morning. They returned to the Sistine Chapel at 3pm GMT and at 7.05pm the white smoke emerged. – Reuters

Crispian Balmer
Crispian Balmer works from Rome. Reuters' chief correspondent, Italy, based in Rome. Previously in Jerusalem, Paris, Milan and Madrid. Comments are my own, not Reuters etc etc. Crispian Balmer has over 4856 followers on Twitter.
Facebook
Twitter
WhatsApp
Linkedin

Pope says on side of victims of US ‘predator’ priests

Pope Francis in Africa: he came, he saw, now what?