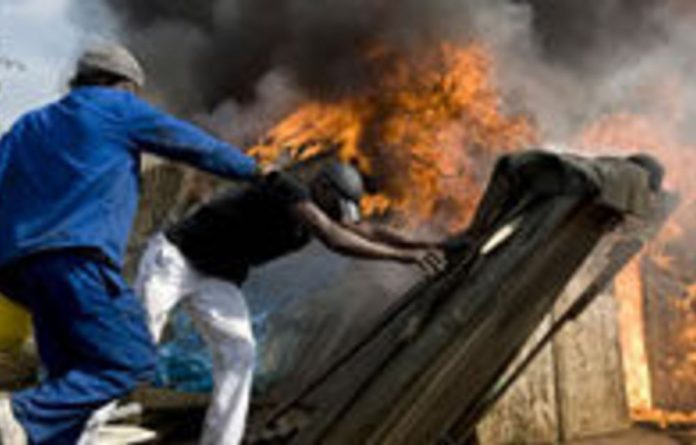 There is something about Mozambique that continues, at regular intervals, to prick South Africa's collective conscience.

There have been several Mozambican citizens living in South Africa whose brutal deaths have seemed to summon the voice of the prophet in the wilderness whose righteous wails strain to be heard above the blistering sandstorms.

Emidio Macia died after being dragged for metres attached to the back of a police van and then assaulted. The pathologist's report is grim: it speaks of deep cuts on arms, abrasions on face and lower limbs, bruised ribs and testicles, bleeding and water on the brain. Death was due to a lack of oxygen.

Even if Macia had been in an oxygen tank there was no way he would have survived that.

"We believe in South African justice … and we also believe that these policemen will be punished in an exemplary fashion so that acts of this sort never happen again," said Maria Elias Jonas, the governor of Maputo province, at Macia's burial in his native Mozambique.

The incident comes almost five years after the gruesome death of another Mozambican, Ernesto Nhamuave. He was burnt to death at the height of the xenophobic violence in May 2008 in Ramaphosaville on the East Rand. Nhamuave is the charred symbol of that narrative, an insistent evocation of the violence in which about 60 people died and thousands of others were displaced.

There was another incident, in 1998, that might have slipped from the memory of most, involving yet more Mozambicans. The case involved four white police officers who were filmed setting their dogs on four Mozambicans in a macabre training exercise in Johannesburg.

Yet another occasion in 1998 involved a Mozambican and two Senegalese train vendors in Pretoria. The three were on the train when they were confronted by a mob. One might have jumped or might have been pushed from the train, to his death; the other two sought refuge on the roof of the train and were electrocuted by power lines.

Is it sheer chance, or coincidence, that every one of these tragic yet momentous incidents involved a Mozambican?

If the laws of probability were fairly applied, one imagines the ubiquitous Zimbabweans (who vastly outnumber Mozambicans) and Nigerians would be involved, perhaps even a Malawian.

It was an act for which most of the organisation's leadership was arrested under the Terrorism and Riotous Assemblies Acts. Their trial was the first big platform given to the movement. It was conveniently turned into a pulpit from which it outlined its philosophy.

The cords linking Mozambique and South Africa were even visible from Nigeria. No one has set down the relationship in poetry as militantly as did Nobel laureate Wole Soyinka, one of Nigeria's most famous sons. In the mid-1970s he penned a poem, Ogun Abibiman; it's so uncompromising in its accents and unflinching in its target that it's better to read it as a manifesto.

"March 3rd. 1976. Samora Machel. Leader of the People of Mozambique, announced to the world a symbolic decision which primed the black fuse on Southern Africa: the Mozambique nation had placed itself in a state of war against white-ruled Rhodesia," the poem begins before gathering steam in the second stanza.

"But very few Africans see this as of primary relevance to the resolution of the Rhodesian anomaly, the act of Samora Machel being more profoundly self-evident as the definitive probe towards an ultimate goal, a summation of the continent's liberation against the bastion of inhumanity — apartheid South Africa."

More than three decades later, the fate of Mozambicans continues to gnaw at South Africa's conscience and interrogate our commitment to humanity.