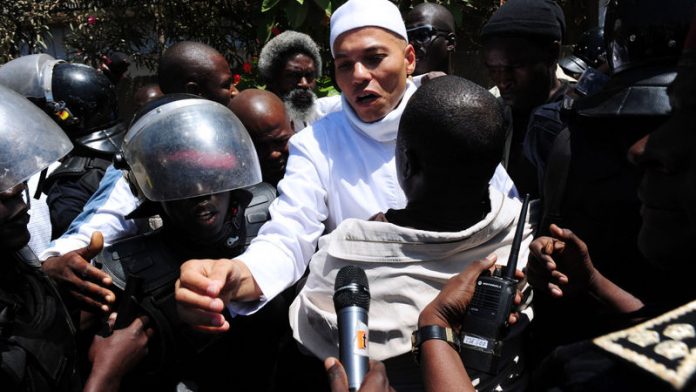 Wade was given one month by the nation's anti-corruption court on Friday to explain how he had come by assets allegedly worth over $1.4 billion, judicial sources said.

"The accumulated value of such companies would be $1.4 billion, according to those who accuse us," El Hadji Amadou Sall, one of Wade's lawyers, told reporters.

Wade denies owning the companies, and his legal team accused Alioune Ndao, the special prosecutor of Senegal's Anti-Corruption Court, of "inventing" the facts to bring the graft case.

"There is not a single franc [belonging to Wade] stashed abroad. There is nothing to say he is the head of a fortune either," Sall said, after a hearing lasting nearly two hours with the prosecutor in Dakar.

Supporters of the former ruling Senegalese Democratic Party (PDS) who shouted "Free Karim" in front of the court were dispersed with teargas by security forces and responded by throwing stones in a brief exchange.

'Witch hunt'
"Karim Wade has a period of one month" to explain satisfactorily his income, said a source close to the probe, adding that if he failed, the case would go to Senegal's High Court, which deals with alleged corruption in office by ministers.

The PDS accuses the regime of Macky Sall, who defeated Wade's father in presidential elections last year, of conducting a "witch hunt" since it came to power and imposing a climate of "terror" against the PDS hierarchy.

Several leaders of the 2000-2012 Wade regime, including his son, have been repeatedly questioned by police and judges investigating allegations of "illegal enrichment" but this is the first time Wade junior has been summoned by Ndao.

The 44-year-old is also under investigation in France following a complaint by the Senegalese government over the alleged embezzlement of public funds, misuse of corporate assets and corruption, according to a judicial source.

After his last questioning by police in November, he was banned from leaving Senegal along with six other officials from the former regime.

The former minister has held several high-profile portfolios including international cooperation, air transport, infrastructure and energy, and was nicknamed "Super Minister" and "Minister of Heaven and Earth". – AFP