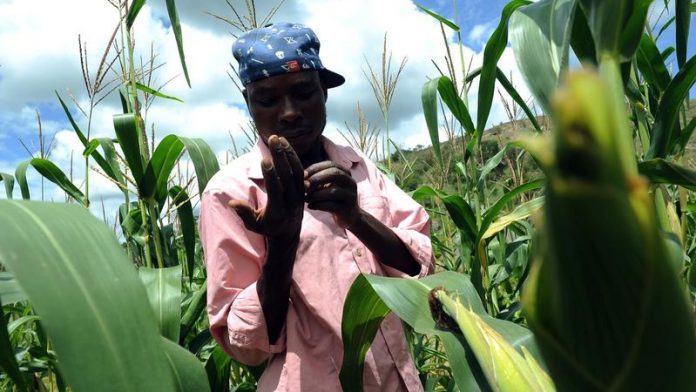 One of the most powerful methods of currying favour with potential voters in a country plagued by severe drought and hunger is the issuing of farming supplies and food.

Video footage shows various meetings in which both Zanu-PF and the MDC use the promise of farming supplies in a bid to secure votes from loyal and often desperate supporters in the upcoming poll.

Zimbabwe was once hailed as the bread basket of Africa but many believe the political influence of the ruling and opposition parties has ironically created the humanitarian food crisis they claim to be able to solve through the sparse distribution of farming supplies, particularly maize seeds.

A major maize shortage has sent the price of maize meal spiralling in Zimbabwe, prompting traders to lobby government to consider importing genetically modified maize. A dry spell and lack of fertilisers in 2012 led to a poor harvest in Zimbabwe, and aid agencies expect the number of food-insecure people to rise to almost 1.67-million by March, according to IRIN. Zimbabwe usually imports maize from Zambia during shortages, but Zambia has imposed restrictions on maize exports.

In light of the national maize shortage, questions are being raised about where the political parties are getting the supplies used in their election campaigns from.

New constitution
A further challenge in Zimbabwe has been the drafting of a new progressive constitution that all political parties could agree on. In 2009, the Constitutional Select Committee was established to review and draft a new and fair constitution and ensure that all stakeholders played a role in the process. After multiple drafts, more than three years and $45-million later, this culminated in a referendum on March 16 2013.

Almost 95% of Zimbabweans voted in favour of a new constitution that would trim President Robert Mugabe's powers and pave the way for new elections, results showed on Tuesday, reported the South African Press Association.

While early results show widespread acceptance of the new constitution, there was a low turnout (less than a third of the 6.6-million registered voters participated) due to perceived voter apathy and alleged political intimidation from opposing parties.

In recent police strategy workshops in Bulawayo, police oficers were told to vote Zanu-PF in upcoming elections. The Mail & Guardian recently reported that Police Commissioner General Augustine Chihuri ordered the police force to ensure that Zanu-PF wins the upcoming election in a retreat held last December. Chihuri did not mince his words, saying there are "surrogates of the imperialists that should never rule this country. If you are not going to support Zanu-PF, you are not fit to be wearing the uniform and its decorated medals".

A push of pro-party propaganda has also been noted in rural areas in the form of apostolic church meetings, largely controlled by the ruling party, urging congregations to vote Zanu-PF and openly criticising any opposition.

As the election process drags on, the living conditions of average Zimbabweans has not improved. They continue to endure increases in fuel taxes, food price hikes (including maize meal) and non-existent public services. With high unemployment levels and poor harvests, food poverty and dependence on food aid will increase. High food prices are often a contributing factor to political unrest. This situation also puts more power in the hands of those distributing food aid – which is most often the ruling party.

Zimbabwe at 34: Freedom must still be realised