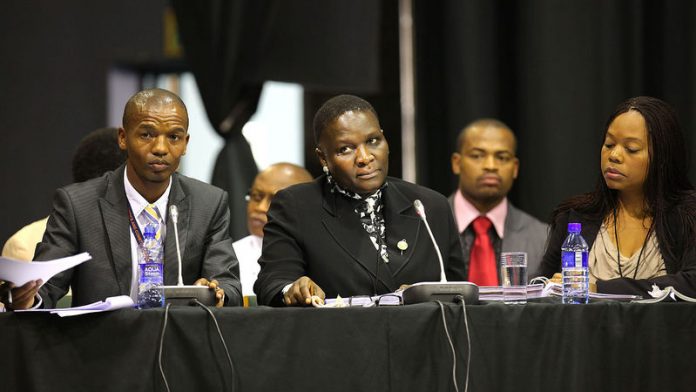 On her first day of cross-examination at the Marikana commission of inquiry, police commissioner Riah Phiyega dodged difficult questions with considerable composure considering the evidence leader's dogged determination to corner her.

Because not much gets by Mbuyiseli Madlanga's controlled aggression, Phiyega's insistently evasive style was self-defeating at times and slowed proceedings down to a standstill on numerous occasions. Retired judge Ian Farlam, chairperson of the commission, was left to referee a boxing match that all too often resembled a wrestling bout.

With each response, Phiyega progressively resembled the police's initial witnesses, whose technique seemed to shed the least amount of light. But she lost out on this round of hide and seek, contradicting herself on more than one occasion.

It became apparent Phiyega was under instruction to protect Police Minister Nathi Mthethwa, summing up his role in the period leading up to August 16 as such: "He is not in operations … he has given us leadership and political support and enabled us to do our jobs." Protecting Mthethwa could might mean the difference between surviving this ordeal with her head intact or going the way of her two predecessors.

Madlanga referred to National Union of Mineworkers president Senzeni Zokwana's recent testimony at the commission, where he recounted speaking to "an official in the offices of the provincial [police] commissioner" to request additional manpower to be deployed at Lonmin, where several workers were already killed. Not satisfied with the response given, he eventually got hold of Mthethwa, who promised to do "all that is possible to deploy the requisite number of officers on the mine".

Phiyega claimed this deployment was effected by Mthethwa liaising with the provincial commissioner, Zukiswa Mbombo, and did not involve her.

'Employ force'
One of Phiyega's first, glaring missteps involved the briefing she received in preparation for the press statement she gave on August 17, a day after the killings. In her witness statement, Phiyega said Mbombo and five other police officers briefed her. She initially told the commission she was not aware that only two of the officers were on the ground when the August 16 shootings occurred and then inexplicably backtracked, saying that she was aware.

On August 17, Phiyega read out a statement that police members had to "employ force to protect themselves from the charging group" after trying to "repost the advance" with water cannons, rubber bullets and stun grenades when strikers "hastily flanked" vehicles deploying barbed wire.

The statement couched the strikers' actions in the terms of a strategised military attack.

When she was referred to scene two, where some point-blank executions took place, Phiyega said in the statement the "militant group stormed towards the police firing shots and wielding dangerous weapons. Police retreated systematically and were forced to ultilise maximum force to defend themselves."

Despite forensic, video and anecdotal evidence to the contrary – much of which Phiyega was privy to – she told the commission: "To the best of my knowledge, what I have presented on the 17th were the facts."

Differing statements
But Hendrich Wouter Myburgh of the K9 unit in Mahikeng said in a sworn statement that on October 2 2012, he personally approached Mbombo and Phiyega with information of an execution-style shooting he witnessed being carried out by a National Intervention Unit constable.

Phiyega first stated the police were not ble to investigate the matter, as Myburgh could not identify the officer facially and then later stated that another officer attended to it, which ended up with the Independent Police Investigative Directorate (IPID). The IPID investigation was abortive, at best, with a statement repeating that the witness could not identify the alleged perpetrator. Madlanga noted that more effort could have been put into the investigation, had the commissioner deemed it necessary.

While Phiyega did well to stick to her script, she did so evasively, leaving a bad taste in the mouths of family members to whom she apologised on Thursday. Her evidence is also an indication of how the top brass of the police will conduct themselves on the stand. For example, she still would not admit to the existence of a "second scene". When asked whether the "high bushy ground" that police officers encircled was scene two, she merely saying "it could be".